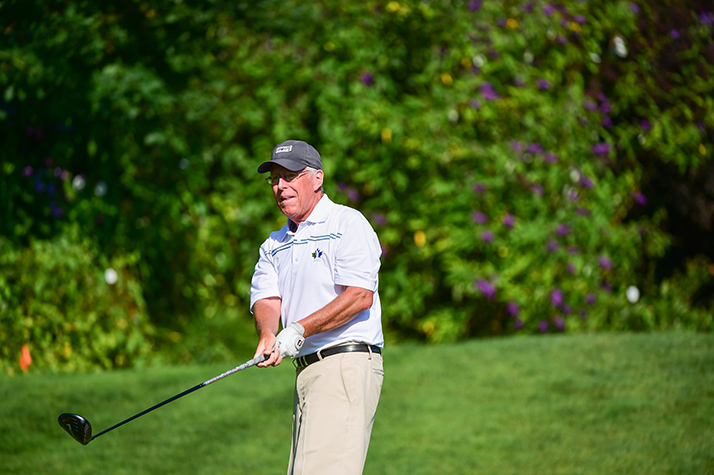 In his last four B.C. Senior Men’s Championships, Doug Roxburgh has finished first twice, second and third. Don’t be surprised if he contends again at this week’s championship at Myrtle Point Golf Course in Powell River.

Roxburgh proved at last week’s B.C. Amateur Championship that his game is in good shape. He comfortably made the cut in his 51st B.C. Amateur, a tournament he has won a record 13 times. And Roxburgh has been playing more tournament golf of late than he has in several years.

Over the last month, he has competed at the Kelowna Senior, the Rivershore Senior in Kamloops, the B.C. Mid-Amateur Championship, the Ogopogo Invitational in Kelowna and last week’s B.C. Amateur at Morgan Creek in Surrey.

After this week’s event, he heads to England for the British Senior Amateur. “The senior ones at Kelowna and Rivershore are only two-day events and you can ride a cart, so it wasn’t that bad,” Roxburgh said of his recent heavy schedule.

“The same thing at the B.C. Mid-Am at Kokanee Springs, we could take a cart. But it has been a while since I have played this much tournament golf. ”Roxburgh has come to appreciate the fact that British Columbia Golf moves its championships around the province. It has allowed Roxburgh to play some courses he otherwise never would have seen.

“A long time ago I wasn’t too keen on it,” he said. “But with the number of courses and the different variety we have around the province, I really like it now. I think it’s great for the courses. They can get some exposure and for us with some extra time to travel, we get to see different areas.” That will be the case this week in Powell River. Roxburgh has never played Myrtle Point, but has heard good things about it.

A field of 113 players will be on hand for the 54-hole event that begins Tuesday. Roxburgh knows winning his third B.C. Senior title won’t be easy. All of the top players, including the likes of John Gallacher of Burnaby, Gudmund Lindbjerg of Port Moody, Norm Bradley of Kelowna, Sandy Harper of Nanaimo and defending champion Harry Ferguson of Invermere, will be in Powell River.

“There’s a bunch of them,” Roxburgh said. “The list goes on.” At age 65, Roxburgh is now also eligible to compete in the Super Senior Championship which is held at the same time as the B.C. Senior.

Du Toit, who has made the cut in all five Mackenzie Tour events he has played in since turning pro, tied for ninth at last year’s Canadian Open as an amateur. He is coming off a tie for seventh place at this past weekend’s Mackenzie Investments Open in Mirabel, Que.

Parry, an assistant pro at Point Grey Golf & Country Club in Vancouver, earned his exemption by topping the PGA of Canada rankings. Williams, a Mackenzie Tour regular, received a late sponsor’s exemption from the tournament, while Wheeldon took one of four available spots in a Monday Qualifier at Heron Point Golf Links in Ontario.

Proteau is five months pregnant with her second child and said this will be her last competition this season. “With my first child I played until my seventh month of my pregnancy, but I’m a little older now and I want to make sure I take care of myself, so that’s why I really wanted to win this championship” she said.

Victoria’s Naomi Ko made it to the semi-finals of the PNGA Women’s Amateur, which was played at the same location. Ko lost her semi-final match on the 18th hole to eventual winner Julianne Alvarez of Seattle.

ISLAND RULES: It will be an all Vancouver Island team representing British Columbia at this week’s Junior America’s Cup competition. Keaton Gudz and Nolan Thoroughgood of Victoria will be joined by Callum Davison of Duncan and Tristan Mandur of Mill Bay at the 54-hole event that begins Tuesday at The Home Course in Dupont, Wash.

Harry White, who for many years has captained B.C.’s teams to the Junior America’s Cup and was instrumental in B.C.'s involvement right from the start of the event, is missing this year’s competition due to recent surgery. British Columbia Golf wishes Harry a speedy recovery.

That was 13 shots behind the winning Southern California Golf Association team. In the 72-hole Pacific Coast Amateur competition, Ewart finished tied for 55th place at 16-over par, Diack tied for 60th at 17-over and Rowe tied for 71st at 23-over.  Doug Ghim of Arlington Heights, Ill., won with a score of nine-under par. Only 13 players in the 83-man field broke par at Chambers Bay.

VISION CUP: The third ISPS Handa Vision Cup was held at Creston Golf Club over the weekend and pitted a North American team of visually impaired golfers against a squad from the Rest of the World. The Ryder-Cup style matches were tight, with each team collecting 12 points. The Rest of the World, having won the last Vision Cup, retained the cup with the draw. The inaugural Vision Cup was held in 2013 in Atlanta, while Milan, Italy played host to the event in 2015.