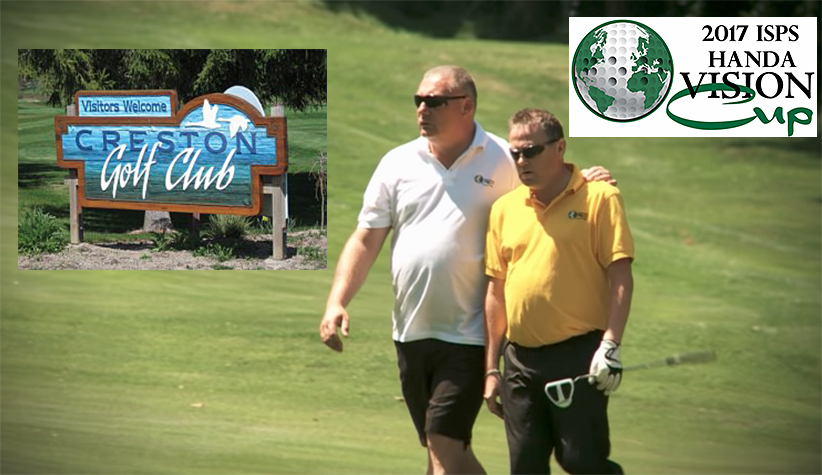 When Darren Douma began to lose his sight, he thought he was going to lose golf as well.

It was the spring of 2010 and Douma, having been diagnosed with a degenerative eye disease, was watching that year’s Masters telecast. Mickelson was hitting his second shot out of the pine straw on the par 5 13th hole in the final round and, well, you probably remember the shot, too.

“I almost quit when my vision started getting bad,” says Douma, a 46-year-old Creston, B.C. resident.

“I was very frustrated and I thought I was frustrating my group all the time having to locate my ball. I was watching the Masters and Mickelson’s famous shot on 13 and I just said, he went for it, no matter what the obstacles were in his way, and I thought, I have this obstacle and I have been going hard at it ever since.”

Happily, Douma didn’t lose golf. Years later, he continues to embrace the game and has become one of the world’s top blind golfers.

Later this month at his home course, Creston Golf Club, Douma will captain Team North America versus Team Rest of the World in the third playing of the ISPS Handa Vision Cup, a Ryder Cup-style competition featuring some of the top visually impaired golfers from all over the world.

“North America has yet to win the Cup,” Douma says. “We are hoping to do that this year on home soil.”

The competition is held every two years. The inaugural event was held in 2013 in Atlanta and in 2015 Milan, Italy played host to the event.

Each team is comprised of 12 players. Team North America has six Americans and six Canadians. Team Rest of the World has three players from England, two from Scotland, three from South Korea, one from Israel, one from South Africa, one from Italy and one from Australia.

Douma was diagnosed with Stargardt disease in 2005. It is the most frequent form of inherited macular degeneration and causes progressive vision loss usually to the point of legal blindness.

He is tournament chairman of the Vision Cup and organizing the event, which goes July 21-23, has consumed much of his life for more than the past year. He has had lots of support from Creston Golf Club and its members.

“I have been living and breathing this event for quite a while,” Douma says. “I don’t have a lack of volunteers. It is a great problem to have. I have to turn volunteers away. The support from the club has been great.”

“Some of the B1 golfers coming are 25 or 30 handicaps,” Douma says. “They are pretty impressive with what they can do.”

Douma is a B3 player and plays to a handicap of 13 or 14 at Creston Golf Club, where he generally gets in two or three rounds a week.

“On our men’s day I play with a group of about 20 guys and they are all familiar with my situation,” he says. “They are really good about helping me out, although I do hear the occasional blind joke.”

One of the Team North America players from Pennsylvania has a seven handicap. Players use sight coaches or guides to help them around the course. Douma says the biggest challenge comes on the greens.

“I would definitely say putting is the toughest because you know how tricky the terrain can be and all that. I used to be a solid putter and I still have my moments where I am draining some putts, but I honestly don’t see the hole or a lot of breaks. I just hit it at the hole and get lucky sometimes.”

He especially hopes to convince more blind women to play. Of the 24 players scheduled to compete in Creston, only one is a woman.

What the Vision Cup is all about

The 2017 Vision Cup marks the third edition of this prestigious international blind golf event. Previously in 2015, The Vision Cup was retained by Team Rest of World 14.5 points to 9.5 points. This will be the third version of the event and the first one held in Canada.

Team North America have yet to win the Vision Cup and hope to change that on home soil in 2017.

B1 Golfers (No Light perception-No Vision)

B1 Golfers (No Light perception-No Vision)

Notes:  The Rest of World team has won the first two additions of the Vision Cup. Team North America is hoping to take over the Vision Cup for the first time on home soil in Creston, B.C. In addition to these players coming to British Columbia, all players are required to have and will be accompanied by their guides. Blind golfers follow the rules of golf established by the RCGA, USGA, and the R & A. There are two modifications to the rules of golf for those Persons with Disabilities.

1. Players may ground their club in bunkers or hazards

2. A player’s guide may stand behind them for the duration of their golf shot

NOTE: All event information and details can be located at: www.vibebc.com Select the “BLIND GOLF” tab and select “2017 ISPS HANDA Vision Cup”.

• Arrival Day & Meet & Greet at Creston Hotel Banquet Room (6:30pm on). An abundance of Hot and Cold Appetizers will be provided.

• ***Golf Equipment will be transported to golf course

• Opening Ceremonies 8:30-9:00am & 9:00am first Round tee-times for the Vision Cup-Doubles Matches-Pinehurst Format

• Bagged Lunches will be provided on the 10th Tee

• Second Round of Vision Cup (8:30am tee-times- Doubles Matches-Pinehurst Format

• Bagged Lunch will be provided on #10 tee

• Singles matches will be determined.

• Final round of vision Cup-Singles Matches- 8:30am tee-times

• Bagged Lunches will be provided on #10 tee

• Following round, all participants will be transported back to the hotel along with their golf equipment in order to freshen up and relax!

• The Gala Dinner and Vision Cup award presentations will take place back at the Creston Golf Club. (Jacket & Tie affair)

• Transportation back to Creston Hotel

Gerry and Chris are from Saskatchewan and were both born and grew up in North Battleford. They are previous winners of the Western Canadian Blind Golf Championships and the Canadian Open. They finished third at the 2012 World Blind Golf Championships and Gerry is the current president of Blind Golf Canada as well as a member on the Board of Directors of the IBGA. Chris and Gerry took part in the inaugural Vision Cup held in Columbus, Georrgia in 2013.

Derek is 32 years old and resides in Calgary Alberta Canada. Derek started golfing at the age of 3 thanks to his grandparents. At the age of 11 Derek started losing his vision due to a rare genetic eye disease called juvenile retinoschisis. Derek joined Blind Golf Canada in 2014 and currently plays in the B2 division and is coached by his Dad Chris.

Some of their achievements include:

Since the age of 14, Darcy has been playing golf at a competitive level. He played throughout high school and continued to play for the University of Southern Mississippi for his university career. After returning home, Darcy continued to compete out of the Elmhurst golf and country club. He competed at the highest amateur golf level in Manitoba. Darcy was born into a family who was affected by a degenerative eye disease called RP (Retinitis Pigmentosa). As years passed, Darcy’s eyesight deteriorated to the point where golf could not be his first priority.

In 2014 Darcy joined the MBSA. That year and the following 2015 and 2016 golf seasons, he won the title of B2 Division champion in the MB blind open Championship. During the summer of 2015 Darcy travelled to Nova Scotia and took a seat on the winning team in the Nations Cup. Last year in Creston B.C. Darcy played in the Canadian Blind open and won the B2 division. Also in Creston he played and finished runner up in the Western Canadian Championship.

Doug started losing his vision as a teenager because of the genetic disorder of Retinitis Pigmentosa. He joined the W.C.B.G.A. in 1995 and has represented his Province and Canada with distinction at many tournaments. Doug enjoys the competition but also enjoys the fellowship and friendship of all the players he has met over the years in his travels. Doug's coach is his good friend Doug Drennan. The two Dougs play a similar style of golf so it is easy for him to guide Penner around the course as long as he goes where he's supposed to. Doug has been playing for quite a long time and is still trying to figure it out! Doug was President of the W.C.B.G.A. from 2007 to 2012 and is currently the Manitoba representative and a Director with Blind Golf Canada.

Joe Furber, along with sister/ coach Fran Oliver both reside in Winnipeg, Manitoba, Canada. Competing at the B1 level, this will be Joe's first time teeing it up in this prestigious event. Joe has Retinitis Pigmentosa, a hereditary degenerative eye disease, that has caused his vision to deteriorate over the years. He began to play golf around age 12, but gave it up in 1999. Then in 2011, with the encouragement of his wife, he began to play Blind golf. Thankfully, now at age 55, Blind Golf has afforded Joe the opportunity to meet many new people, play golf all over the World and, to once again, enjoy the game he loves.

Darren Douma started participating in blind golf in 2013 when he was coping with vision loss due to Stargardt’s Disease. Darren started golfing at the age of 7, and was involved in the golf industry since the age of 13. Golf experience included Outside Pro Shop services, Pro Shop Assistant, and Clubhouse Manager, all at the Creston Golf Club.

Recently, Darren became President of the Creston Men’s Golf Club. Darren previously hosted the 2015 Canadian Championships in Creston. This was a rewarding experience, and hosting the 2017 Vision Cup will be no different. Daren is thankful for the strong support of the Creston Golf Club Management and Board of Directors and all the many members who step up to volunteer each and every time to make our events exceptional and unforgettable.

Darren also recognizes the dedication of the blind golf guides, as without them, they could and would not be able to participate as they do in blind golf. So for this Darren recognizes his two guides, Walt Harder, a close family friend, and his brother Darcy Douma for their past and future support of his blind golf endeavors.