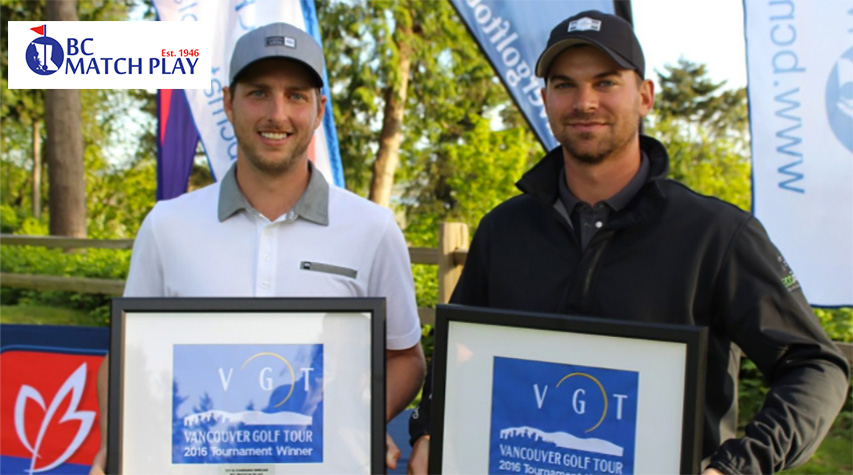 It was back in 1946 that the legendary golfer Stan Leonard of Marine Drive Golf Club and some local pros created the BC MATCH PLAY. The event would become one of Canada’s Premier Golf Tournaments, reported to be 2nd in popularity to the Canadian Open at its height.

In 2009 Fraser Mulholland incorporated the BC Team Match Play competition into his Vancouver Golf Tour. He has maintained the team concept with a qualifying event plus four weeks of match play competition to produce the winning team.

This year's version of the historic event has gone through its qualifying stages and the knockout rounds begin on Saturday, April 1st at Mayfair Lakes GC in Richmond.

Keeping with the tradition of the BC MATCH PLAY tournament and doing our very best to honour the founders of this great event, we have once again scheduled the 71st Anniversary BC MATCH PLAY on some of BC’s Premier Golf Courses.

With continued thanks to our 9-year Title Sponsor CANADA BREAD, we have raised this year’s TOTAL PURSE to $20,000 with the winning team’s share equaling $5,000 in the SCRATCH/OPEN TOURNAMENT and $2,000 in the NET TOURNAMENT.

On behalf of the Vancouver Golf Tour and our team of committee members and volunteers, we all hope you have an incredible experience at this year’s CANADA BREAD BC MATCH PLAY TEAM CHAMPIONSHIPS.

Stay tuned as we will release details of the 2nd Annual BC MATCH PLAY SINGLES CHAMPIONSHIPS very soon!

Good luck to all competitors in the 2017 event. The finals are set for Saturday, April 15, 2017 at Beach Grove Golf Club.

The BC Golf Museum is searching for the original McElroy Trophy, the Vancouver Sun trophy and the Bill Thompson Trophy.