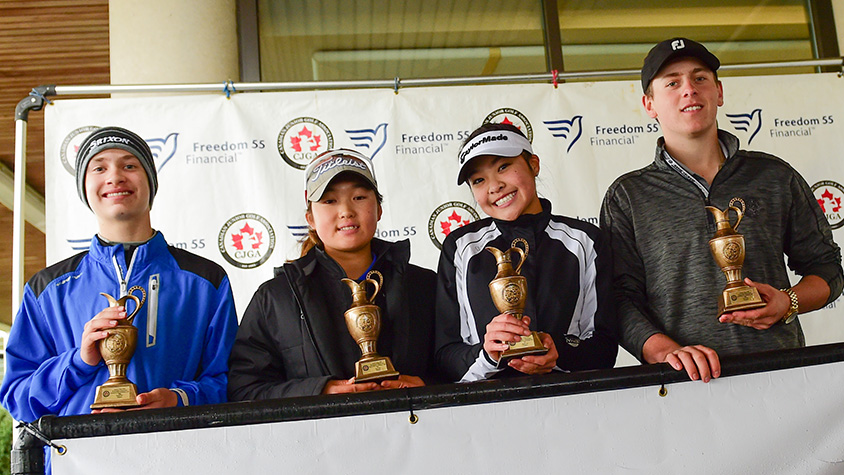 Keaton Gudz from Victoria, BC, fired a bogey free final round 66 (-6) to claim the coveted Junior Boys title. Playing in his second CJGA Junior Tour event of the season, Gudz edge out Golf Canada’s Development Team member Chandler McDowell by one stroke.

“I’m really stoked, I played awesome and it was great playing with Chandler,” said an elated Gudz after his round. With rounds of 66, 75, 66 and a tournament total of 207 (-9), Gudz knew it was going to be a tough week of competition. “The whole week was super steady and we were all really close, today I felt I just clutched up under the circumstances and got the win.”

Chandler McDowell from Red Deer, AB who matched Gudz for the first two rounds was unable to keep pace in the final round and finished in the runner-up position.

Coquitlam’s Euna Han, used her steady play to claim the Junior Girls title shooting 3 rounds of subpar golf for a tournament total of 210 (-6).

With 24 junior girls in the field Han knew it was going to be a tough tournament. “When I saw the tee times and saw that some of the Golf Canada Development Team players were competing I knew I had to prepare even harder, which helped my game.”

Fighting the rain and sloppy course conditions, Han remained calm and collected as she cruised to the winner’s circle. “It was tough out there for some of the holes with the rain and wind today. I got over it pretty well and I think the result showed it,” said Han.

Originally from Winnipeg and now of Surrey, BC, Bailey Bjornson secured the Bantam Boys title with a final round score of 74 (+2). Bjornson who finished runner-up at last year’s tournament, got off to a rocky front nine but kept it together on the back to take home the win.

“I played solid and it feels great to win a tournament of this calibre,” said Bjornson. “My short game was really good and helped me when I put myself in a tough spot.”

Claiming her second Bantam Girls title of the season was Jennifer Gu of West Vancouver, BC. With rounds of 75, 76, 78 Gu finished the tournament with a total of 229 (+13).

Last month Gu won the CJGA Burnaby Golf Junior Open. “That was a great start to my season and to carry it on with this win feels awesome,” said Gu in the clubhouse. “I put myself in a pretty good position after the first two rounds. I just focused on my own game today and tried not to worry what everyone else was doing.”

The CJGA Junior Tour’s next event, The CJGA BC Junior Open, will take place at University Golf Club in Vancouver on April 1-2.

The Canadian Junior Golf Association (CJGA) is a “registered Canadian amateur athletic association” (RCAAA) not-for-profit registered federally with Revenue Canada. The CJGA is dedicated to providing Canada’s junior golfers with the necessary skills and knowledge required to lay a foundation for a future in competitive golf.

Through its six-stage competitive development program that focuses on tournaments, clinics, international competitions, and mentoring programs with PGA Tour professionals, the CJGA introduces the game to juniors as young as five and offers competitive multi-day events for the more advanced golfer. The CJGA acts as a feeder system to provincial and national competitions, collegiate and university golf, as well as professional and recreational golf. For more information, please visit www.cjga.com