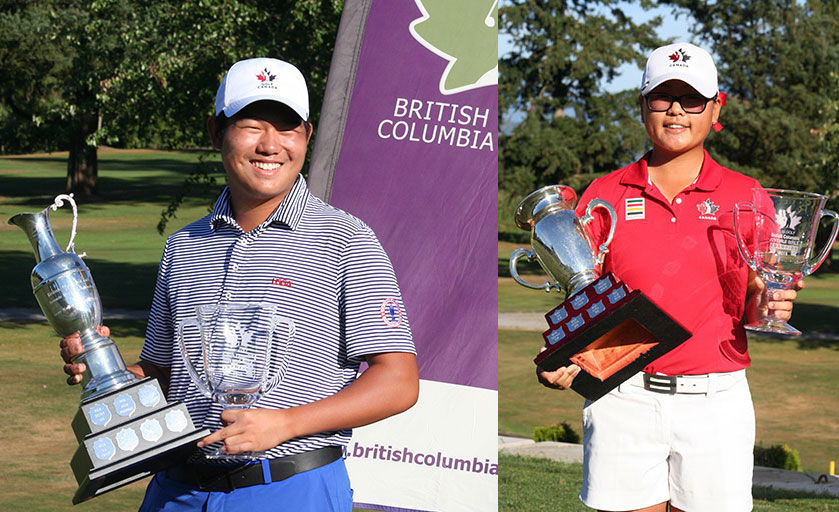 The 2016 British Columbia Golf Juvenile Boys' & Girls' Championships are in the books and the trophy engraver will only have to learn one last name, Lee.

Each went about securing their trophies in slightly different fashions at the Chilliwack Golf Club, however.

On the boy's side, Khan Lee went into the final round 4 shots back of 3rd round leader Jeevan Sihota of Victoria but a brilliant 6-under par 66 shot him past 9 other players and into the winner's circle. Lee had quite the roller coaster ride on his front nine recording 4 birdies to go along with two bogies and 3 pars for a 2-under 35.

But it was probably the 5th hole that proved most pivotal for the Lab@Northview player as he needed to play no less than four balls off the tee of the 500-yard par 5 before he could be sure one of them was in bounds.

His biggest break of the day may have come when he found his original ball and was able to parlay that into a bogey 6 rather than whatever number awaited ball number 4. From there he seemed to settle right down as he would birdie 6 of his final 13 holes.

"I'm really proud of myself that I shot 6-under today, I could have gone much lower, I was going for the course record. But come on, 66 in the final round of a championship, I'll take it," said Lee.

Played under clear blue skies and at times sweltering heat, there were also periods of gusting wind to fool with the player's minds but it didn't affect Lee as he said, "I was in the zone, I just kept focussed, didn't give up, I was in the zone, I was feeling good."

Lee, who has committed to Washington State for next year carded a total of 8 birdies on the day including a bogey-free 31 on a very tough back nine, draining a 20-footer on the 18th that produced a fist-pumping, hat tossing celebration. That putt staked him to the two shot lead he woud eventually win by over runner-up Sihota, who carded a final round, even par 72 to finish at 3-under (213) for the tournament.

North Vancouver's Sean Buckles and Parksville's Aiden Goodfellow each finished at 1-under (215) and in a T3 while Vancouver's Ilirian Zalli finished alone in 5th at 1-over (217).

With the girls, it was a case of gaining a small measure of revenge for Surrey's Hannah Lee who played solid, steady golf with rounds of 70, 71 and 70 for her 5-under score and a 5-shot margin over Victoria's Akari Hayashi.

Last year Lee went into the final round with a 4-shot lead before eventually coming 2nd to Abigail Rigsby's splendid course-record setting 65 at Spallumcheen GC in Vernon.

The moment wasn't lost on Lee, who sits second in the BC Golf Titleist Order of Merit, "Last year I was leading going into the final round, so yes, it feels really good to finish this one off and win it," said Lee.

Lee went into the final round this year tied with the 13-year old Hayashi and things stayed pretty close for a while as Lee held a one-shot advantage going into the back nine on the strength of a bogey-free, two-birdie first nine 35. She still held that one-shot edge going to the 13th hole, but that's where the tide would turn for good.

Lee's birdie on the par 4 coupled with Hayashi's triple-bogey 7 created a four-shot swing and suddenly made for a comfortable five-shot cushion for Lee and she never looked back.

Burnaby's Sumie Francois, who started the day one-shot back of the leaders in the final group fired a final round 3-over 75 to finish alone in 3rd place at (217), while Delta's Amanda Minni at 4-over (220) was fourth with Nanaimo's Shirin Anjarwalla at 6-over (222) rounding out the top five.

The Best-Ball competition held concurrently with the event went to Khan Lee and Vancouver's Andrew Spalti who combined for a total of 21-under to win by one shot over Aiden Goodfellow and Victoria's Nolan Thoroughgood....The Zone Team Championship award was also presented on the final day, although it was completed after round 2 with the team of  Sean Buckles, Ben Whiton, Amanda Minni and Phoebe Yue from Zone 4 taking the title....There was one hole-in-one in the tournament made in the final round by North Vancouver's Tyler Casper on the par 3 140-yard 4th hole.