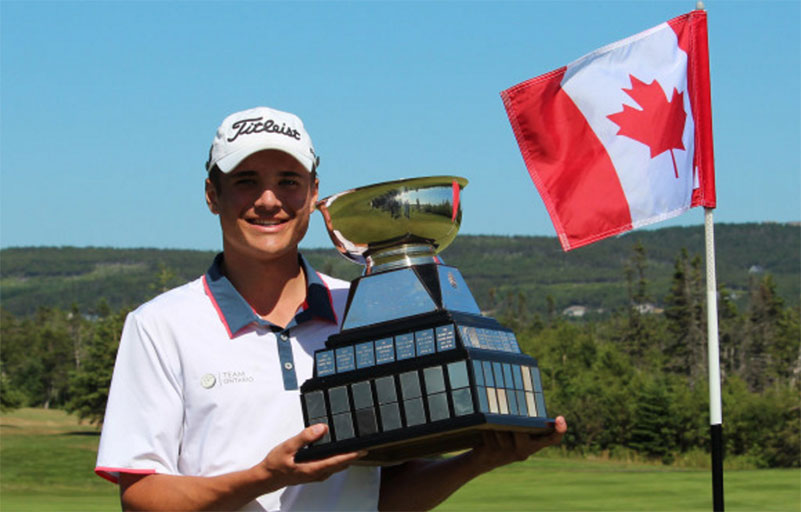 ST. JOHN’S, N.L. – Any memories of inclement weather during the 2016 Canadian Junior Boys Championship were all but forgotten thanks to clear skies and brilliant sunshine during the final round at Clovelly. Sam Meek took advantage of the conditions to earn a come-from-behind victory and claim the national junior title.

With the victory, Meek becomes the prestigious championship’s 78th winner. The history of the competition and the significance of the victory were not lost upon the champion.

“This win means the world,” said the native of Peterborough, Ont. “This is what I’ve strived to accomplish my entire junior golf career. To have my name on the same trophy as some of those winners is incredible. This is the top of junior golf in Canada, so just to be a part of that is an amazing feeling.”

The 17-year-old entered the final round with a share of third, trailing dual-citizen Thomas Critch of Cedar Park, Texas, by three shots. Meek tallied two birdies on the day for a 1-under 71 showing.

“I’ve been hitting it really well all week, so I had a lot of trust in myself there,” he explained when asked about the keys to the win. “Basically just staying patient. I started the day pretty far back. I was three shots behind Thomas. He struggled a bit off the bat, so I was able to get something going there. I believe I made the turn two shots over him, so just staying steady on the back nine was the key from there.”

“Coming in, I feel like I have a lot of experience,” added the champion. “This is my third Canadian Junior now, so I was able to kind of build off what I’ve learned from people who have won this in the past and see what they did to be successful. It just kind of came down to thinking back to all the hard work I’ve put into it and just trying to stay in the moment and not get too far ahead of myself.”

In addition to claiming the Silver Cup as Canadian Junior Boys champion, Meek has earned an exemption into the 2016 Canadian Men’s Amateur Championship to be contested at The Royal Ottawa Golf Club and Eagle Creek Golf Club from August 8-11.

Thomas Critch, whose familial ties to the host city garnered him a strong following throughout the competition, finished 1-under 287 to capture runner-up honours in the Junior division. The 16-year-old’s performance earned him the title of 2016 Canadian Juvenile Boys champion. The winner of the 16-and-under Juvenile division held the 54-hole lead before shooting a final-round 76.

A pair of 16-year-olds finished 1-over 289 to claim third in the overall competition and second in the Juvenile division. Peyton Callens of Langton, Ont., registered a 68 on the day to climb the leaderboard. He adds the result to a season which has included the Ontario Junior Boys’ title and a victory at the CN Future Links Prairie Championship. Duncan, B.C., native and reigning CN Future Links Quebec champion Callum Davison collected two birdies en route to a 76.

Fellow British Columbians, also from Vancouver Island - both from Victoria - Keaton Gudz and Nolan Thoroughgood, the 2016 BC Amateur Champion, finished T7th and T11th respectively with Thoroughgood also finishing in 6th spot alone in the Juvenile Division.

All together, 17 players from BC made the cut with 6 inside the Top 20 in the Junior Boys including Coquitlam’s A.J. Ewart, who was T14th, while 2016 BC Junior Boys Champion, Mill Bay’s Tristan Mandur, finished in a T17th.

Alberta claimed the inter-provincial team title which was played concurrently over the championship’s first 36 holes. Calgary’s Brendan MacDougall, Chandler McDowell of Springbrook and Matt Bean from Canmore finished 2-under 286 for a nine-stroke victory over runner-up British Columbia whose team consisted of Tristan Mandur, AJ Ewart and Smithers' Adam Veenstra.

The 2017 edition of the competition will be contested at Cataraqui Golf & Country in Kingston, Ont., from July 31 to August 3.

Additional information on the 2016 Canadian Junior Boys Championship can be found here.