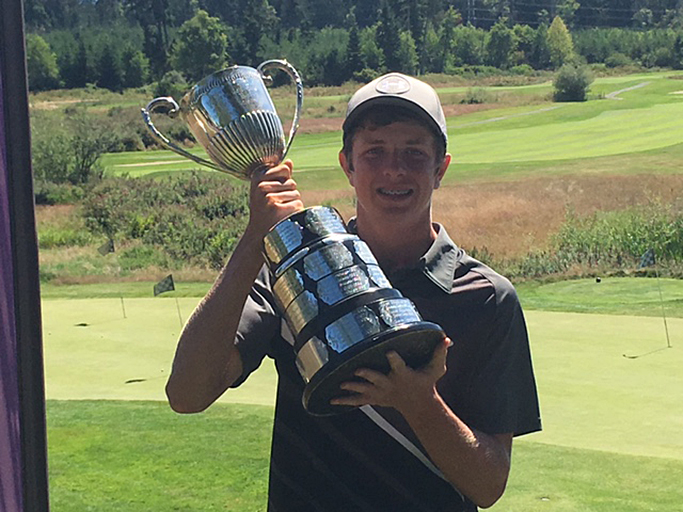 Nolan Thoroughgood literally travelled from sea-to-shining sea to compete in his first national championship. The 15-year-old from Victoria, who last month became the youngest winner in the 114-year history of the B.C. Amateur Championship, is in St. John’s, Nfld., to compete at this week’s Canadian Junior Boys’ Championship.

Thoroughgood, who also won gold at the recent B.C. Summer Games in Abbotsford, will also compete in next week’s Canadian Amateur Championship in Ottawa. He knows these two events will be a stern test.

“That will be a different level than what I have been playing,” Thoroughgood said after winning the B.C. Summer Games in Abbotsford. “The BC Am was huge for me, but now I am going to the Canadian Am and Junior and it is even bigger. I don’t really have any expectations. I am doing good in the province, but doing good nationally is different.”

Thoroughgood will also be competing in the juvenile championship for players 16 and under that is being contested at the same event.

The Canadian Junior Girls Championship is also being played this week at The Links of Penn Hills in Shubencadie, N.S. B.C. Junior Girls champion Mary Parsons of Delta heads a three-member B.C. team that also includes Tiffany Kong of Vancouver and Hannah Lee of Surrey. The tourney begins on Tuesday.

Parsons and three other teammates -- Amanda Minni of Delta, Sumie Francois of Burnaby and Alisha Lau of Richmond -- finished fourth out of 18 teams at the Junior America’s Cup competition in northern California.

SOLID FINISH: Kimberley’s Jared du Toit followed up his top 10 at the RBC Canadian Open with a tie for fourth at the Porter Cup in Niagara Falls, N.Y. Du Toit closed with a three-under 69 to finish the 72-hole event at four-under par. Harrison Endycott of Australia won with a score of 14-under par.

BACK ON TOUR: With David Hearn and Graham DeLaet heading to Brazil to represent Canada at the Olympics, it will be up to Abbotsford’s Adam Hadwin and Nick Taylor to provide the Canadian content at this week’s PGA TOUR stop, the Travelers Championship in Cromwell, CT. Hadwin and Taylor both missed the cut there last year.

TOUGH TEST: Seattle Golf Club proved to be a tough test at last week’s 50th playing of the Pacific Coast Amateur Championship. Only four players in the 84-man field managed to finish the 72-hole event under par. William Zalatoris of Plano, Tex., beat Nahum Mendoza of San Diego in a playoff to win the championship. Both players had finished at three-under par.

Stuart Macdonald of Vancouver was the best of British Columbia’s three-man contingent. Macdonald struggled to an 80 in the final round and finished tied for 23rd at 10-over par. Macdonald had put himself into contention with a brilliant six-under 66 in the second round. Richmond’s Chris Crisologo tied for 54th at 18-over par and Kevin Kwon finished 77th at 30-over.

LOW CANADIAN: For the third time this season, Vancouver’s Ryan Williams was the low Canadian at a Mackenzie Tour-PGA Tour Canada event on Sunday. Williams finished eighth at the Syncrude Oil Country Championship in Edmonton. He finished at 14-under par, five strokes behind the winner, Aaron Wise of South Africa. Wise, the reigning NCAA champion out of the University of Oregon, won in just his second start on the Mackenzie Tour.

Williams, who earned $5,425 Sunday plus a bonus of $2,500 for being low Canadian, is now sixth on the money list with $34,818. The top five at season’s end earn some status on the 2017 Web.com Tour. The Mackenzie Tour heads south to Calgary this week for the ATB Financial Classic.

CHIP SHOTS: The final round of the Symetra Tour event in Kansas City was cancelled because of weather. Jessica Wallace of Langley tied for 18th place, while fellow Langley product Sue Kim tied for 35th. . .Matt Makinson of Coyote Creek in Surrey fired a nine-under 63 Sunday and has a one-shot lead on Oliver Tubb of University Golf Course heading into Monday’s final round of the Vancouver Golf Tour’s Golden Ears Open at Pitt Meadows Golf Club.