Ambiente GC Offers A Breath Of Fresh Air In Arizona 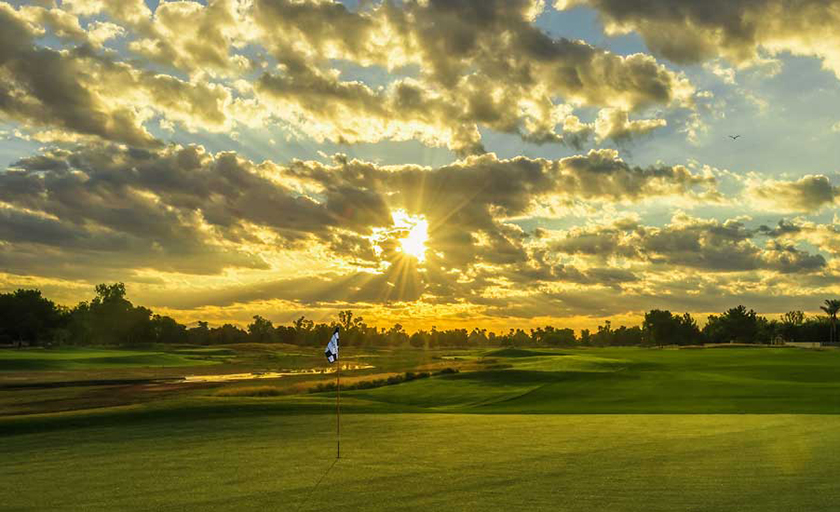 Golf courses, for the most part, can be viewed as works in progress.

There always seems to be something which can be changed from the original design in order to improve the look or simply to keep up with technology as players continue to hit the ball further and sometimes straighter.

Now, it can be as simple as adding a bunker or something a little more intensive by changing an entire hole. The Indian Bend golf course in Scottsdale recently went a little further. O.K.....a lot further.

In fact, further is so far back in the rear view mirror it's a mere dot on the horizon as the golf course moves forward.

A little more than four years ago the concept was debated to change the Indian Bend layout into something much different. "Indian Bend was a very average golf course that wasn't very exciting. It wasn't a great JW Marriott product," said Shiloh Hagey, tournament director at Indian Bend for the past 18 years.

So the decison was made to spend several millions of dollars to bring about a property that better met the collective eye of the Marriott people who operate the Camelback Inn Resort and Spa where Indian Bend and its sibling, The Padre course, are situated.

Indian Bend was shut down the day after Father's Day in 2102 and reopened in November of 2013 under the name 'Ambiente' after the team of Hurdzon/Fry Environmental Golf Design worked their magic.

"We were looking as a faclity to become a destination, not just a facility that has two golf courses with the resort," said assistant professional Kurt Brown. "We're looking for somebody to come out and stay at the Camelback Inn to play golf and we just didn't have that before with the Indian Bend course."

Hagey says the biggest change he's seen when viewing the new product is what he describes as an updated golf course with some character. In fact, two thirds of the holes you play today at Ambiente are essentially new, including a stretch which includes holes two through nine.

"A lot of the routing along the golf course has stayed similar because it's along the wash which cuts through the golf course and it's in a corridor of homes. We had a specific blueprint to deal with and we stayed within the same one we had before but we competely bulldozed the golf course," said Hagey.

Ambiente, which means, 'atmosphere, environment or 'surroundings' - in Spanish, went from 250 acres of turf grass down to 90 acres, translating into saving quite a bit of water in a part of the world where agua is a precious commodity.

"More than one thousand trees were planted as well from seed in the wash area," said Brown. "It's going to be more of a high desert look, more of a links style golf course."

So, while you won't see the iconic saguaro cactus along the wash, you will see plenty of native grasses waiting to swallow up a wayward tee shot. With a variety of tee boxes on each hole you can play to your handicap from a comfortable length or toughen it up if you feel like a challenge.

The look from those tee boxes is a little deceiving as the faiwarys appear to be on the narrow side but in fact you have plenty of room for a wayward tee shot . "It's a good design as well because you end up missing a tee shot by 30 or 40 yards and it still ends up in the fairway which makes you feel good," said Brown.

The fairways need to mature, the greens will soften up eventually and the sand in the many bunkers will settle, moving this course closer to what the designers had in mind when the process started.

The early returns, though, have been favourable according to Hagey when he chats with people after their round. "People are just blown away by how much better it is and they can't believe the old golf course existed out there, said Hagey. "It's fair, everything is out in front of you. It's going to challenge your golf game but it's also a fair game of golf," adds Brown.

With the drastic makeover complete, golfers staying at the Camelback Inn Resort and Spa will be able to tackle the more benign, parkland style, Padre course one day and then step it up a notch with Ambiente, said Brown.

"Once that gets to it's maturity it will be absolutely gorgeous."