B.C. Golf Notes: Wait Almost Over For Wong, Who Expects To Play Next Week On Web.com Tour 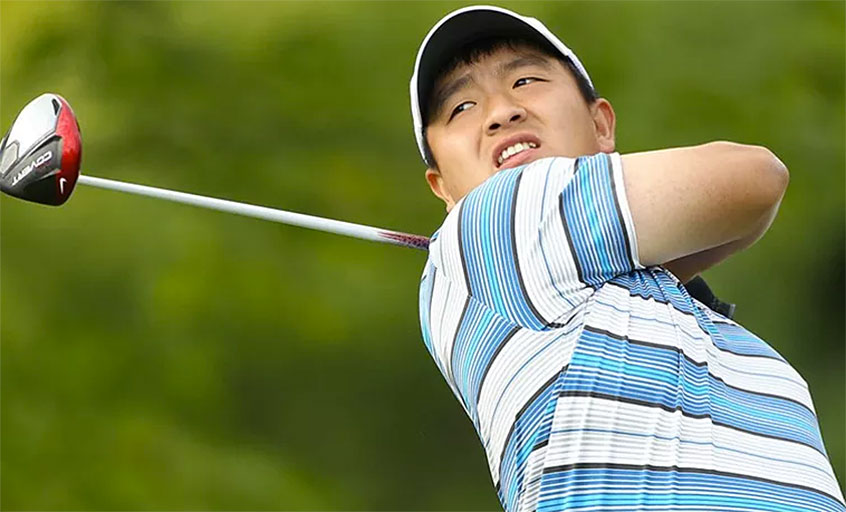 North Vancouver’s Eugene Wong will have lots on the line when he plays his third Web.com Tour event of the season next week in South Carolina. Wong expects to draw into the BMW Charity Pro-Am, scheduled for May 19-22. The Web.com Tour will conduct its second reshuffle of the season after that event and a solid showing by Wong would help him get into more tournaments the rest of the season.

“I'm going to try and not think about that too much,” said Wong, the 2008 B.C. Amateur champion. “I'm just going to try and play good golf and go from there. Good golf will take care of everything. Obviously there is some extra pressure in the back of my mind.”

Wong, who earned conditional status by finishing fifth on the PGA Tour China money list last year, has drawn into just two events this year. He tied for 44th in the Brasil Championship early last month and missed the cut three weeks later at the El Bosque Mexico Championship. He did not draw into the Rex Hospital Open, this week’s Web.com Tour stop in Raleigh, N.C.

Wong acknowledged that it has been frustrating not knowing when he's going to play next. “It tests your patience,” he said. “But earlier in the year I didn’t think I was going to get into any events. So for me to have played two and now get a third, I was like okay, it’s better than my expectations.”

Q-SCHOOL GRADS: Langley’s Adam Cornelson was one of three British Columbians to earn a passing grade at qualifying school last week. Cornelson tied for ninth spot at the fourth and final Mackenzie Tour-PGA Tour Canada Q-School at Crown Isle in Courtenay, where the top 16 players all earned status that will guarantee them starts in the first four events of the season.

Brendan Dillon of Port Moody (T6) and Langley’s Thomas Hay (T9) also survived. It was relatively smooth sailing for Cornelson, who opened with a five-under 67 and never fell out of the top 16. He finished with a 72-hole score of five-under par.

“The first round definitely relieved a little pressure,” Cornelson said. “I tried to play every shot as committed as I could and see where the chips fell. I really didn’t look at a leaderboard. I kind of knew where I was at. It was a stressful week for sure, but I was happy to get it done.”

Cornelson closed with a two-under 70 in Friday’s final round. “It was good. I got off to a good start. The course was really firm and the wind was blowing. It was tough to get it close.” Cornelson knew at that point he wasn’t going to catch the eventual winner, University of Oregon sophomore Aaron Wise, so he played conservatively the final day. “I was kind of in a situation where bogeys would hurt me more than birdies would help me,” he said. “It’s a little odd playing defensive like that. But it was all I needed to do.”

Wise, a California native, won with a score of 14-under par and earned a full exemption for the 2016 season. He plans to turn pro in early June after the NCAA Championships.

INVITE ISSUED: The Freedom 55 Financial Open, the season-opening event on the Mackenzie Tour-PGA Tour Canada circuit, has given Burnaby’s Devin Carrey a sponsor’s exemption into the May 26-29 Point Grey tournament. Carrey, who now lives in the Houston area, has conditional status on this year’s Web.com Tour, where he missed the cut in his only start at the Chitimacha Louisiana Open.

CLAN OUT: Simon Fraser University’s men’s golf team saw its season end in disappointing fashion at the NCAA Division II super regional tourney in Las Cruces, N.M. SFU finished 17th in the 20-team tournament. The Clan did get solid performances from junior Kevin Vigna of Coquitlam, who tied for 13th place at one-over par, and Richmond sophomore Chris Crisologo, who tied for 17th spot at two-over.

SENIOR MOMENT: The Bear Mountain resort in Victoria received great news this past week, when it was announced it would play host to a Champions Tour event in late September that had originally been scheduled for a resort in China. It seems like a no-brainer that Victoria’s Jim Rutledge be offered a sponsor’s exemption into the $2.5-million Pacific Links Championship, which will be played Sept. 23-25.

Rutledge, who has lost his exempt status on the 50-and-over circuit, played in his first Champions Tour event of the season at this past week’s Insperity Invitational in Woodlands, Tex.. He closed with a round of 72 on Sunday and finished tied for 59th.

CHIP SHOTS: West Vancouver’s David Rose tied for 30th at a PGA Tour Latinoamerica event in Honduras. . .Sue Kim of Langley tied for 20th at the Symetra Tour’s stop in South Carolina. Fellow Langley product Jessica Wallace tied for 25th. . .Symetra Tour regular Samantha Richdale drew into the LPGA Tour’s Yokohama Tire Classic in Alabama, where she tied for 45th. . . Abbotsford pros Adam Hadwin and Nick Taylor are both in the field for this week’s Players Championship, where a season-high purse of $10.5 million will be up for grabs. Hadwin tied for 61st at the Wells Fargo Championship on Sunday. Taylor missed the cut.