Hanson Trades In Strikes For Strokes 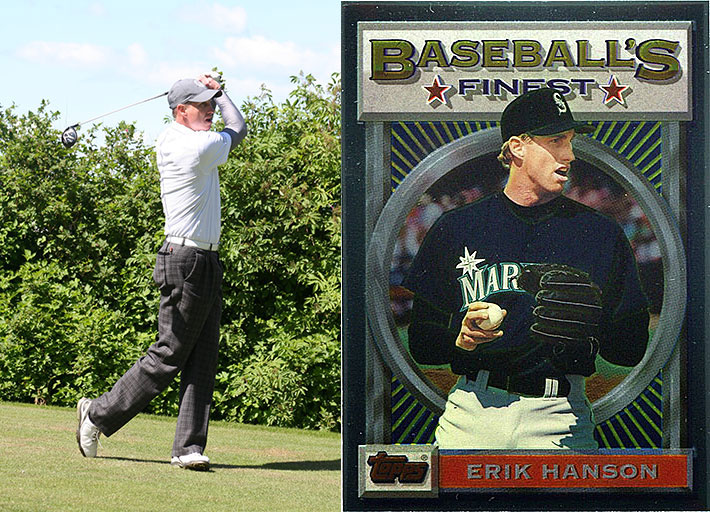 A nasty curveball was Erik Hanson’s bread-and-butter pitch when he was striking out batters in the majors. As an amateur golfer, Hanson now prefers to pound the ball straight down the middle. When his pitching career ended back in the late 1990s, Hanson transitioned to golf. He will tell you that switch came easy and that pitching and golfing have a lot in common.

“Golf is actually very similar to pitching,” said Hanson, who is competing for the Washington State Golf Association in this week’s PNGA Cup at Richmond Country Club.

“It is the same philosophically because you have to think one shot at a time, never let what just happened affect your next shot and you can’t think ahead. Mechanically it is also the same. You start in a static position, you wind up, you release it and your weight goes from your right side to your left side.

“You're also trying to control the ball in both golf and baseball. If you're pitching, you want to go left, right, hard, slow. Same thing in golf, you're curving it left, curving it right, hard swings, soft swings, hit it high, hit it low. It’s the same thing.”

Hanson, who turns 51 later this month and calls the Seattle area home, has become an accomplished amateur golfer and spends much of his springs and summers competing in tournaments. Golf helped fill the competitive void in his life after his baseball career ended.

Hanson, a six-foot, six-inch right-hander, won 89 major league games in 11 seasons. His best season came in 1990, when he won 18 games with the Seattle Mariners, the team that drafted him in 1986.

Hanson has appeared in eight of the 11 PNGA Cups that have been played and has put together an impressive record in the Ryder Cup-style match play event that features teams from the British Columbia, Washington, Oregon and Idaho golf associations.

After halving his two matches on Thursday, Hanson’s PNGA Cup record is now 14-2-7. “I have learned how to like match play more than I used to,” Hanson said. “I really like stroke play better. I like playing my own ball and trying to post a score. But match play is interesting. It has kind of grown on me and it's always fun to play in these events.”

The highlight of Hanson’s amateur golf career came last summer when he qualified to play in the U.S. Senior Open at Del Paso Country Club in Sacramento. He shot rounds of 78 and 76 and missed the cut, but called it an absolute thrill. That appearance also confirmed what Hanson already knew: that he’ll never be as good at golf as the pros who play the game for a living.

“It was very similar to making an all-star team except for the fact I was born to pitch and I wasn’t born to play golf,” he said. “I have become useful or decent at golf over the years, but at that level I was more or less invading their territory.

If you turned it around and the other 155 guys in the field had to face me (pitching), none of them could make contact. Ever. So here I am playing in their arena and I really don’t belong there, but it was one of the thrills of my lifetime. No question.”

Hanson said he has absolutely no aspirations to turn pro and try to qualify for the PGA Champions Tour. “I love amateur golf and I want to keep it fun,” he said. “To do it for a living takes a lot of the fun out of it. Amateur golf is where I belong talent-wise and where I’d like to remain. I don’t want the game to become a job.”

But he will be back next month trying to qualify for his second U.S. Senior Open. “Oh yeah,” he said. “I’m only 51. I will try for as long as I can still walk.”

CLICK HERE for live scoring from the PNGA Cup.