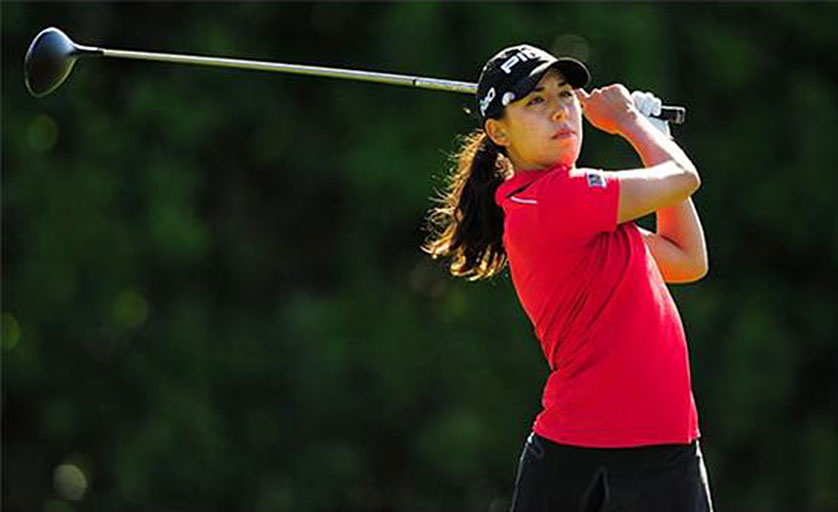 The Chico’s tourney had a unique format that saw members of the LPGA’s Legends Tour play with Symetra Tour players on the weekend.

Wallace was thrilled to be joined by Hall-of-Famer Joanne Carner in her group on Saturday. Wallace, a two-time B.C. Junior Girls champion, earned $4,696 on Sunday and now stands fifth on the Symetra Tour money list with $15,672. She finished solo second in the Symetra Tour’s season-opening event in Beaumont, Calif., in February.

The top 10 money-winners at season’s end earn exempt status on next year’s LPGA Tour. Kelowna’s Samantha Richdale, who won last week’s Symetra Tour stop in Lake Wales, Fla. and sits second on the money list, skipped the Chico’s event as she drew into the LPGA Tour’s Lotte Championship in Hawaii.

NICE FINISH: Abbotsford’s Adam Hadwin climbed up the leaderboard with a four-under 67 in Sunday’s final round of the PGA TOUR’s RBC Heritage tourney in Hilton Head, S.C.
Hadwin, who began the day tied for 55th, finished tied for 30th and made $39,235. He now stands 86th on the FedEx Cup points list.

Fellow Abbotsford resident Nick Taylor also made the cut at the RBC Heritage, but was one of several players who did not play Sunday’s final round when the field was reduced to 75 players. Taylor did earn a cheque for $10,915. He now stands 110th on the FedEx Cup points list. The top 125 qualify for the FedEx Cup playoffs.

Taylor is in the field for this week’s Valero Texas Open in San Antonio. Hadwin is taking the week off.

Clapp and Wheeldon beat Langley’s Thomas Hay and Jeremy Paradis of Kings Links in Delta three-up in the 36-hole final. They split the winner’s prize of $3,000. Clapp and Wheeldon are both past winners on the Mackenzie Tour-PGA Tour Canada circuit that begins its 2016 season May 26-29 with the Freedom 55 Financial Open at Point Grey Golf & Country Club in Vancouver.

Two other B.C. events, the Bayview Place Island Savings Open at Uplands in Victoria and the GolfBC Championship at Gallagher’s Canyon in Kelowna, follow the Point Grey event.

This was the 70th playing of the B.C. Match Play Championship, which is now part of the Vancouver Golf Tour (VGT) schedule.

CHAMPIONSHIP SEASON: Several B.C. golfers will be teeing it up in NCAA conference championships in the next couple of weeks. That includes B.C. Amateur champion Jared du Toit of Kimberley and B.C. Women’s Amateur champion Michelle Kim of Surrey.

Kim will lead her University of Idaho Vandals into the Big Sky Championship that begins Monday in Boulder City, Nev. Du Toit and his Arizona State University teammates will head to Salt Lake City for the Pac 12 Championships that begin April 29.