Video of the Week: Rickie Fowler Makes Hole in One for $1,000,000 for Els Foundation 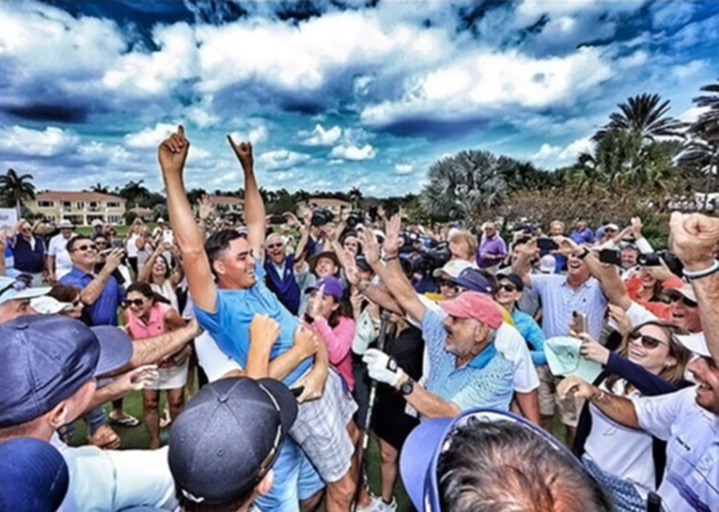 Not often does the biggest golf shot of the week happen on Monday, but that was definitely the case March 7th, when Rickie Fowler made a hole-in-one at a pro-am tournament for the Els for Autism Foundation, and that triggered a $1 million donation to the charity from software maker SAP.

The event, which took place at the Old Palm Golf Club in Palm Beach Gardens — just catty-corner from PGA National, home of the Honda Classic — featured a number of prominent PGA Tour players. But Fowler stole the show with a most unlikely ace — a one-hopper into the cup on the 113-yard, par-3 “bonus” 19th hole after the pro-am had ended.

In fact, as Tim Rosaforte reported on the Golf Channel later, Fowler had already changed shoes and thought he was done for the day when his opportunity for the $1 million prize arose. He borrowed a wedge from Luke Donald, got a ball and swung away.

Fowler’s ball dropping into the hole touched off a riotous celebration among the players and spectators. Event host Ernie Els lifted Fowler into the air as Rory McIlroy, Louis Oosthuizen and many others rushed into congratulate him.

Later in the day, Fowler posted a photo of the celebration — that’s it at the top of this page — on Instagram, and captioned it: "Epic Monday! One of the coolest moments in my life making a hole in one earning $1,000,000 for @ernieelsgolf #ElsForAutism."

We certainly can’t argue with that. What a shot, what a day, and what a fantastic way to help the Els for Autism Foundation continue its work in autism research.

Here’s one of the better videos we’ve seen of the shot, as well as some other reactions: