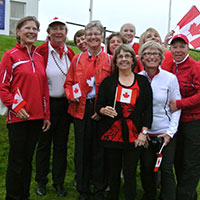 Over the last few years a dedicated and very talented group of women have represented Canada in a way we can all be proud of both with their excellent play and the manner in which they have carried themselves while wearing the Maple Leaf abroad. A fairly regular member of this most worthy contingent has also taken the time to share some of her and her countrymates' experiences as they competed in the Irish and British Senior Women's Championships. They may have also taken in the odd historic site and partaken of a pint or two along the way. They are Canadian after all. - ed.

My name is Karen Pultz and I am a golf member at Peace Portal Golf Club in Surrey, British Columbia, Canada.

I am a mature 'Senior' golfer having played the Irish and British Senior Amateurs in 2008, 2009 & 2010. My placing has been anywhere from 4th to missed cuts.

All experiences never to be forgotten.

Talk of more Canadians playing links tournaments began 2 years ago. It stemmed from the Irish and British Senior Amateur 2013 locations.

We rented a 4 bedroom, self-catering house called Seascape, in Portballintrae, a quiet country location bordered by cattle, sheep and the sea. It was a 30 minute drive to Castlerock GC and 6 minutes from Royal Portrush GC.

Our kitchen was alive with laughter. So many cooks too! Good friends before, even better friends now!

Helen Jones, a friend, past Irish Senior Champion and 2013 Ladies Club Captain at Royal Portrush took brilliant care of all our local requests and many questions. To her go our many thanks.

Yes, 34 Canadians! Denise McCarthy of the Irish Ladies Golf Union surely expanded the field and we felt very grateful and welcomed by all.

There was such a buzz amongst us, such anticipation, and such camaraderie. We made so many new friends within our own country let alone the other players from The Netherlands, Sweden, USA, Ireland, Scotland, Denmark, England, Finland, Germany and Wales.

Seniors golf is different - competitive yes, but, supportive too. Group dinners, sightseeing and a pint or two at the pub.

Golf is our game, a reason to play, make new friends, to travel and experience tournament golf at home or away. We all want to play and place well but is that all? - No - not at all.

At the Irish banquet we sang the Stompin' Tom Connors "Hockey Song" replaced with golf lyrics - at the top of our lungs - we were "Proud as Punch". It came together thanks to Bev and Susan, (well done. ladies). I played the guitar with 'mucho gusto.' Lyrics are available upon request!

We toured Bushmills Irish Whiskey (est 1608), hiked Giants Causeway, toured Londonderry, Belfast and Enniskillen and drove the magnificent Irish coastline including on the beach at Portstewart.

So much to see and do in County Antrim and Derry, 2 of 6 counties in Northern Ireland. Too many places to mention to golf your ball.

You must come, one day, before you can't...oh, and a caution before reading below.... as it may or may not change your mind.

Fourteen of the 34 Canadians made the cut and enjoyed the best weather day of the week for the final round. Including ties we had 5 Canadians in the top 10 - Diane Williams, Diane Dolan, Alison Murdoch, Jackie Little and myself.

Congratulations have to go to our Canadian team of Diane Williams, Diane Dolan and Ivy Steinburgh who won the team event. Ireland’s Gertie McMullen won the individual championship.

Good golfing in our world is your score against par. Here, par can mean absolutely nothing at all. Bogie or Double can be a very good score. Scores were high - very high - but relative to the field is all that counts. Patience and perseverance will keep you in the tournament.

Links golf is the land between the sea and the fertile land. This is Castlerock with deep fescue rough and fast, firm fairways. A local club full of local golfers. There are 18 holes here, along with another 9 that they call the "wee nine". It does not have the reputation of a Portstewart or a Portrush, but, a great track nonetheless.

It is the kind of course that, when the wind blows, you have to have good 'lines' (or, targets as we say here) so that your ball ends up on the fairway and not in the "love" grass. Because in the "love" grass means you are *!*(&%^. (no literal translation required). Take your medicine and take a wedge!

Golf performance on Links is a challenge. They call it "think golf".

Each shot, chip or pitch requires thought because you have so many choices. Should I hit it high and ride the wind, low with a piercing ball flight, bump it, run it, carry it or hit into the hill to deaden it? Hmm...for the love of links golf, which should I pick? My advice is whichever you choose be completely committed and then pray for acceptance! Of course, if all else fails, have a chuckle and carry on.

Castlerock had 30-40mph winds, on and off rain, a recipe for non-stop 19th hole talk. The stories were loud, descriptive and usually ending in laughter - because you have to laugh - if you don't it hurts too much.

Example: 3 hybrid into a 4-5 club wind (a whopping 120 yds) exactly to the intended front of the green and then see it hit hard and instantly turn right into a bunker with a face that is taller than you. Choice time - hit it straight up over the face, go sideways or go backwards where the face is much lower. I will leave the rest up to you, your bunker skills and imagination.

You can only enjoy the ride, as they say - and ride we did!

Thus, our first week was complete. Loads of stories and memories. With my experience I wondered if the weather could get much worse the next week. No one wanted to think it could...hmm...we'll see!

I had great pleasure having Kalum Steele as my caddie all week. He was 18, a fine player himself and an excellent green reader. Best of luck to Kalum as he is off to his first year of University. I just asked him to be my friend on Facebook.

If you are interested in participating in an upcoming Irish or British Senior Amateur please see the web sites below for 2014 information.

Thank you for sharing in our story. I can be reached at karenpultz@gmail.com if you have any questions.