Coaches Happy To Get First Round Under Their Belts 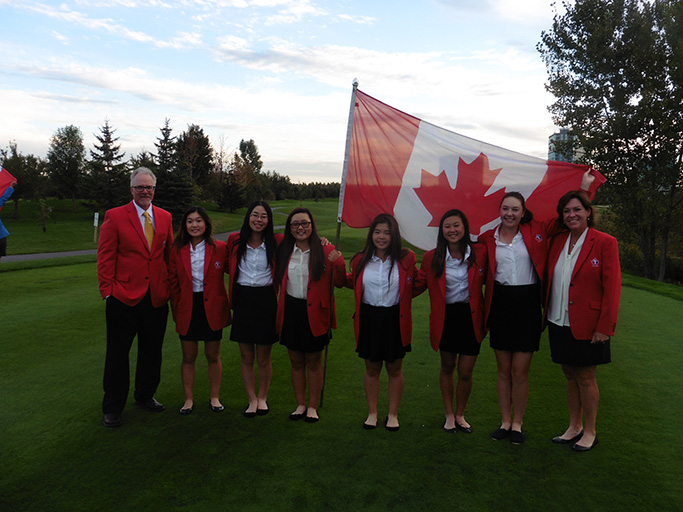 Team Canada 2 Coach Mike Martz, Far Left, And Team Canada 1 Coach Ann Carroll, Far Right, Are Happy Round 1 Of The World Junior Girls Is In The Books And Are Hopeful Their Teams Can Rebound With Three Rounds To Go At The Marshes In Ottawa - Image Credit Alfie Lau

For Ann Carroll and Mike Martz, it was just one round of four.

While their squads, Carroll’s Team Canada 1 and Martz’s Team Canada 2, trail other countries after Round 1 of the World Junior Girls at The Marshes in Ottawa, they’re both optimistic that things will change with three rounds to go.

“It was a good day because I saw a lot of fight back in my team,” said Martz. “Euna had a tough start and then she made some birdies to get it back and I’m pretty happy for her.”

Martz was busy trying to be in three places at one time, as his team played in consecutive groups starting off the first tee. “You try to be everywhere, but that’s not always possible,” said Martz. Martz also had good things to say about the comeback of Alisha Lau.

“Alisha had a tough start, but she kept fighting and she got it back to under-par,” said Martz. “She had a tough finish, but I’ll try to dwell on what’s good and the fact she fought back so hard today.”

And Martz also had kind words for the third member of the team, Richmond’s Kathrine Chan. “Every day you play, you learn, and Kathrine learned something about her game today and that will help her in her next rounds.”

Like Martz, Carroll had to spend most of her day trying to follow all three of her charges, even as they played in all separate groups. “The first one’s under our belts and there are three days left so we will build on this,” said Carroll. “I think our team felt a little bit of pressure, but they have a round in the books so hopefully, that pressure is gone.”

Carroll echoes Martz’s sentiments about continuous learning. “We learn every day and every day, we get smarter,” Carroll said about the message she wanted to give to her team.

Lau has a unique perspective, having worked with Carroll this year as a member of Team Canada’s Development Squad. “One of the things I’ve learned is even when I have a bad hole, I get mad for 30 seconds and then I let it go and focus on the next shot,” said Lau, who had to use that strategy at least twice during her opening round. “Our coaches are always working with us, trying to emphasize the positives and telling us we have to keep learning.”