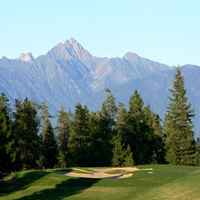 How's this for a golf getaway? You, your clubs and your favourite foursome travel the world, sampling the game in its myriad forms.

Start, perhaps, with a high-altitude mountain round, then hit the beach for a traditional links game.

Practice your putting on a sun-drenched desert green before playing 18 holes through a lakeside vineyard.

Watch for eagles (both kinds) on a forest-lined fairway, tackle a tricky canyon layout, and finish up on a breezy oceanfront course.

Counting the Air Miles? No need. You can have all of this and more with a single flight to British Columbia.

Stunning courses, world-class designers (think Arnold Palmer, Jack Nicklaus and Robert Trent Jones Sr.), impeccable maintenance, and the kind of scenery that makes it hard to keep your head down: it's no secret that B.C. offers some of the world's best golf.

What really makes British Columbia stand out, though, is its vast range of playable landscape, with everything from mountain slopes to desert, canyons and oceanfront tempting lovers of the game.

Steep elevation changes, jagged snow peaks, waterfalls and the occasional wandering deer: this is mountain golf in B.C., where layouts meander across meadows and over glacial brooks.

For sheer alpine drama, nothing beats the 122 metres (400 feet) of elevation change at the Fairmont Chateau Whistler Golf Course, carved into the slopes of Blackcomb Mountain.

Gentler options in Whistler include the lakeside Nicklaus North, designed by the Golden Bear himself, and the Arnold Palmer-designed Whistler Golf Club, which winds beneath snow peaks and around a series of nine lakes.

And did someone say altitude? At the Big Sky Golf and Country Club, half an hour north in Pemberton, players can helicopter, thanks to Blackcomb Aviation, to the top of 2,499-metre (8,200-foot) Mount Currie and drive long shots to the valley below.

Top picks along the Columbia Valley Golf Trail include Greywolf Golf Course at Panorama Mountain Village, where striking elevation changes, island greens and a signature Cliffhanger hole add up to a memorable game.

Nearby Copper Point boasts 36 holes of mountain-framed scenery, while Eagle Ranch meanders along bluffs above the Columbia River.

Swinging by the Sea: Oceanside and Island Golf

Water features? How about the Pacific Ocean? With thousands of kilometres of coastline, it's easy to find a seaside round in B.C.

At Furry Creek Golf & Country Club, on the Sea-to-Sky Highway just north of Vancouver, Howe Sound is just one of the course's intriguing hazards.

Played along a fjord-side slope, this mountain-meets-ocean gem kicks off with a 50-metre (165-foot) vertical drop on the first hole — and it's a scenic roller coaster ride from there.

A milder game is on hand in the province's capital city, where the Victoria Golf Club's seaside fairways have attracted golfers since woods were made of wood.

From the bright lights of the city's Inner Harbour, a string of scenic tracks — dubbed the Vancouver Island Golf Trail — runs north along the east coast of the Island.

A real links course — the kind of sandy, windswept landscape that inspired the game of golf — can be hard to find outside the British Isles.

Enter Kings Links by the Sea on the tidal shores of Boundary Bay, just south of Vancouver. This par 72 layout is the real McCoy, with sea grasses, sandy bunkers and tricky wind patterns sweetened with views of the bay and the Coast Mountains.

Links fans can also give their sand wedges a workout at some of the more generously bunkered courses in the sagebrush covered hills around Kamloops, in B.C.'s Thompson Okanagan region.

Vineyards and fairways have a symbiotic relationship in B.C.'s Okanagan Valley, where acres of Merlot and Pinot share the lakeside hills with dozens of championship golf courses.

In some cases, the greens are among the vines. At Kelowna's Harvest Golf Club, for example, 7,109 yards of lake-view fairways run through almost 25 hectares (60 acres) of orchards and vineyards; players can pause to pick a Braeburn or Fuji apple as they wait their turn on the green — or sample the wines post-game.

Other courses — and there are dozens to choose from in the area — offer views across lakes and vineyards, striking elevation changes, and manicured fairways shaded by ponderosa pines.

Options include the Kelowna Golf & Country Club and The Okanagan Golf Club's challenging 36-hole duo: the Bear and the Quail.

Yes, Canada has a desert. A pocket desert, to be exact. In the south Okanagan, conditions create a haven for warm weather creatures, cacti, some very good Merlots — and desert golf.

Fairview Mountain Golf Course, for example, has welcomed players to its expanse, near Oliver, since 1925. Here, you'll find mountainside desert golf at its best, with a 7,000-yard Les Furber design that overlooks acres of vines.

Nearby, Osoyoos Golf & Country Club, perched above the town of the same name, showcases another must-play experience with two 18-hole championship courses that snake through a setting backed by mountains, lakes, vineyards and, of course, desert.

Canyons, ravines, gullies and hoodoos — the geological drama of the west plays well with golf, creating long carries over gullies and thrilling cliff-hanger shots, all against a background of lake breezes and stands of ponderosa pine.

Another is Gallagher's Canyon Golf & Country Club on a canyon's edge near Kelowna. Among its charms are views of Layer Cake Mountain, a volcanic and glacier-sculpted land-form that is the only geological formation of its kind in the world.

One-of-a-kind layouts like this are par for the course in B.C. Whether you're tackling a breath-taking hole in the Kootenay Rockies, lining up your shot against snow peaks in Whistler or sinking a putt among vineyards in the Okanagan, chances are you'll find your sweet spot here.