Brad Fritsch Even After First Round At U.S. Open, David Hearn Two Strokes Back 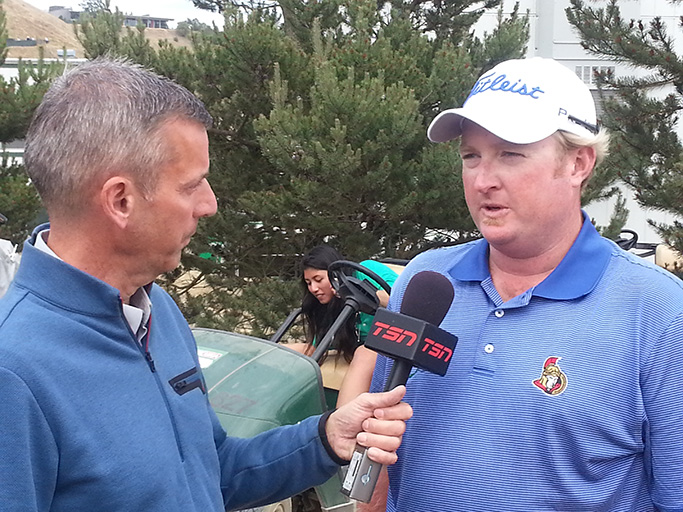 When no players withdrew from the U.S. Open field at Chambers Bay on Thursday, dashing the hopes of alternate Mackenzie Hughes of Ontario, the red-and-white Canadian colours were left to be carried high by two other golfers with Ontario links.

Fritsch, who is sponsored in part by the Ottawa Senators, was one of the first players in the afternoon flight of golfers and after making an early birdie at the 11th ­ - his second hole of the day – Fritsch made bogeys at 16, 1 and 4 before his second birdie of the day at the 503-yard par-4 5th hole.

“I birdied 5 from the fairway bunker,” Fritsch said, adding his final birdie of the day, on the par-3 ninth, came courtesy of hitting a 5-iron from 205 yards to 10 feet behind the hole and then draining the birdie to finish the day at even par 70.

“Today was very fair,” said Fritsch. “I hit a lot of good iron shots today. The longest club I hit into a par-4 today was a 6-iron. . . If you can hit high spinning shots with a 6-iron, then you can hit it close, but I have troubles with that shot.”

Fritsch is looking forward to going out early Friday morning to play his second round, because the greens should be softer. He watched Thursday morning’s action on television and saw how the greens were receptive to approach shots. By the time he teed it up in the afternoon, those greens had dried up and balls weren’t stopping like they had earlier in the day.

He said he’s not scared the USGA will use tougher pin positions because there were tough ones used on Thursday, most notably on the short par-3 3rd and then the long par-5 18th, which he said were both literally on the edges of the green.

Only two strokes back of Fritsch is Brantford, ON’s David Hearn, who played in the morning in a group just behind Phil Mickelson. Hearn finished his opening round satisfied with how he rallied on the back 9.

After playing his opening 9 in (+3) – with bogeys at 5, 7 and 9 – Hearn gave himself a great birdie look at the 10th, just missing a six-foot putt. But he didn’t let that get him down, making back-to-back birdies at 12 and 13 to get himself to within one of even par.

Hearn said he was happy with the course set-up, terming it fair, especially with the tee locations. “I’m getting more comfortable with every trip around this course,” said Hearn. “You have to stay patient. . . I definitely have a better feel for the golf course and where I want to play certain shots.”

Hearn admitted he left several strokes out on the golf course. In addition to the two missed birdie putts on the back 9, Hearn felt he could have made some red numbers on the front 9 as well.

“Nothing was unfair today. I think they were pretty generous with the tee positions. They have the opportunity, though, with the amount of length out here, that if they wanted to make it really silly, they probably could . . . . I think they were a little bit conservative with the set-up today.”