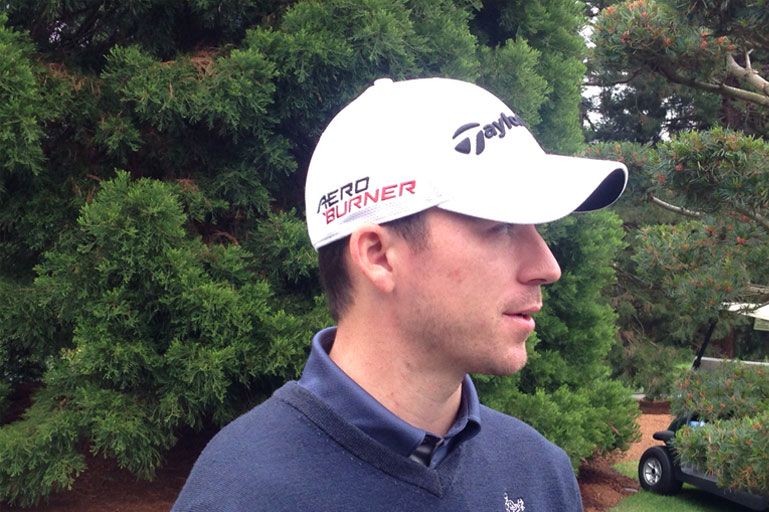 by Alfie Lau, Inside Golf - The present and future of Canadian golf converged on Wednesday afternoon at Point Grey Golf & Country Club.

Abbotsford’s Nick Taylor, taking a week off from the PGA TOUR's AT&T Byron Nelson in Texas, was back in British Columbia for the first time since January and had time to give some encouraging words to Adam Svensson, the Surrey native who just turned pro this winter and has cashed some nice Florida mini-tour cheques.

Svensson is considered a future star in Canadian golf, but with no status on PGA TOUR Canada, he’s relying on sponsor exemptions and good results to gain the experience he needs to succeed as a professional golfer.

Svensson and Taylor have one thing in common: they’re both coached by Surrey’s Rob Houlding and if Svensson needs any directions on the road to golf success, Taylor’s story is one he can follow.

Just two seasons ago, Taylor was starting his season on PGA TOUR Canada, just hoping to get enough status to move up to the Web.com Tour. He finished seventh on the money list, getting a pass to the final stage of Web.com Q-School. Taylor would have a successful 2014 season on that tour, graduating to the PGA TOUR and its opening events in the fall of 2014.

Only four events into his rookie season, Taylor would come from behind and win the Sanderson Farms Championship, cash a $720,000 cheque and secure an almost three-year exemption on the PGA TOUR.

So now, instead of worrying about what the year ahead holds, Taylor has time to come home, celebrate his brother’s birthday, spend time with wife Andie and cheer on his friends on PGA TOUR Canada.

“I have a lot of good friends here I haven’t seen for a few months,” Taylor said. “It’s fun to be out here.”

Life has changed for Nick and Andie since the big win in Mississippi. They’ve bought a new home in Scottsdale, they attended the Super Bowl in Phoenix and they’re getting used to the first-class hospitality the PGA TOUR offers its stars. The long exemption also allows Taylor to set his schedule months in advance and he knows that he’ll play at least one Major this year, as he is exempt into the PGA Championship at Whistling Straits in August.

But what hasn’t changed for Taylor is he remembers what it was like to have nothing but his golf dreams.

“I remember the feeling. You are waiting for the season to start all spring. I remember being very excited to go to Victoria, where the Tour used to start, and getting the season going.”

So when friends he made on the Vancouver Golf Tour, guys like Ryan Williams, Adam Cornelson and Seann Harlingten, need inspiration, they don’t have to look far and if they happen to look out in the gallery this week, they might see Taylor’s smiling face looking back at them.

Even as Taylor was relaxing and doing media interviews within sight of the first tee, a group of his island friends and acquaintances, featuring Riley Wheeldon, Gordy Scutt, Stu Anderson and Cory Renfrew, were getting out on their final practice round, hopeful that this was the first step to following in Taylor’s footsteps.

Taylor’s T27 finish last week at the Colonial moved his yearly earnings to just more than $1 million for the season and this is the first week he’s chosen to take off from the PGA TOUR since the beginning of April (Taylor didn’t qualify for The Masters or the WGC Match Play in San Francisco).

Taylor, currently 67th on the FedExCup points list and 63rd on the money list, hopes to maintain his position so that he can play as many of the four FedEx Cup tournaments as possible. With 125 players starting, and cuts to 100, 70 and then 30 for the Tour Championship, Taylor knows he has to continue building a cushion to ensure his season doesn’t end too early in September.

The week off is also important because Taylor is playing The Memorial, Jack Nicklaus’ tournament, next week and playing his U.S. Open qualifier in Columbus on June 8, the day after The Memorial ends.

While the field for that U.S. Open qualifier is traditionally the strongest – it’s where most PGA TOUR regulars play their sectional – it also offers the most spots into the U.S. Open, usually more than 18, with the alternates often being the first to draw into the U.S. Open.

This year’s U.S. Open holds particular significance for Taylor, who completed his illustrious university career at Washington in 2010. “I played the (US) Amateur there in 2010,” said Taylor. “It’s a course I like.”

Taylor hopes that course knowledge will come in handy come June 18, but he’ll have to survive his 36-hole qualifier on June 8 first.

“It would be great to have my family and friends come down and see me there,” said Taylor.