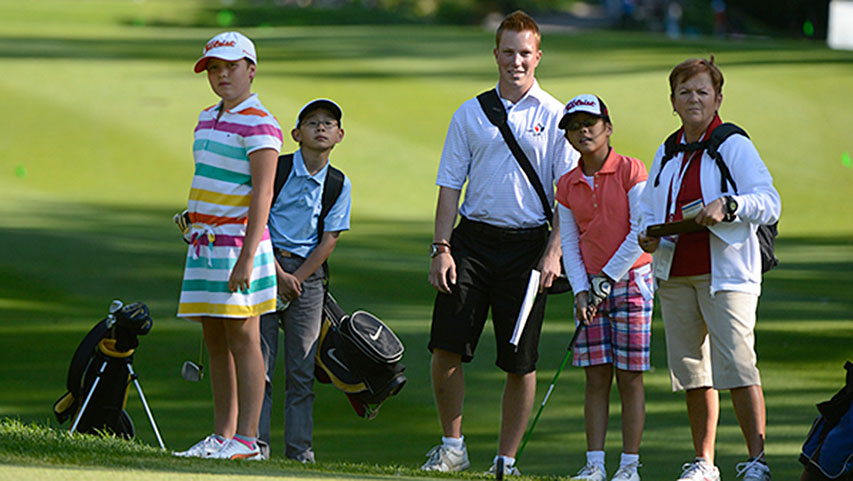 As a pilot project of sorts, the Community Golf Coach program being presented by Golf Canada and the Coaching Association of Canada isn’t about making Joe Public into the world’s greatest golf coach.

Rather, it’s about allowing the members of the public at large to work alongside CPGA professionals as they teach youth about the grand old game.

Speaking on the phone from Acton, Ont., Matt Allen, the Education Coordinator for the PGA of Canada, said this particular stream of the association’s programming may be in its infancy but the national body sees great potential ahead.

“It’s not really new; we’ve revised the program,” he began. “We had something (before) that was called Future Links Leader, which was the same concept. What we kind of identified was we weren’t really matching what the public needed and the community volunteer golf coach needed in terms of training.”

In doing the program 'mulligan,' if you will, the learning process was stretched from a four hour session with no technical element to two full days with a half-day outdoors, “To really meet the needs of what both our PGA of Canada members need in terms of training our volunteers and what the public is looking for in that kind of training,” Allen continued.

So far, he noted, the reception to the revamped tutoring has been exceptional. “We’ve run three workshops and it’s been hugely popular. Once we get the people in the room and they see what we’re trying to accomplish with the training and what the two days look like, it’s been nothing but positive comments from both the participants in the classroom and our PGA professionals, who are getting qualified volunteers back at their clubs.”

That last sentence is key to what bringing in community members to coach this hard-to-master game is all about: volunteers who can help pro staff pass on knowledge about the game to young players. What it doesn’t mean is that Peter Public is a teaching professional.

“Our goal is to get people who can support PGA professionals,” Allen said to that end. “Taking a two-day workshop is not going to be enough to let them go and teach on their own with young golfers, or golfers of any status in the game.

“We want to get them trained on how to set up a safe learning environment, (teaching) some really introductory technical skills that they can work with, with junior golfers who are brand new to the game. That’s the goal for this. We’re not trying to create brand new teachers out there; this is to support and get them a little more educated … teaching values that young golfers or young athletes are looking for.”

When queried about the reaction of PGA members who may benefit by getting volunteer coaches from such a program, Allen said they’ve been delighted with what’s taken place. “It’s very positive so far, given we’ve only done three workshops so far. I’ve sat down with a few members who have sent staff or volunteers or parents to the workshop and they’ve loved it! They love having somebody that’s a little more engaged, who knows what’s happening within the NCCP (National Coaching Certification Program). Having a volunteer they can give a little more responsibility to than they’ve had before.”

Besides all of that, a program such as the Community Golf Coach is a huge benefit to helping grow the game, Allen continued. “It’s massive, really massive. I think we’ll see the impact in a few years, of bringing better trained volunteers into the sport. One of the big goals in the long term is to get to those areas in Canada that may not have a PGA professional in their area get somebody there who at least has back-ground knowledge of how to work with junior golfers. That’s the gap now in any sport in Canada, given our landscape.”

As for the price of $300 plus tax that’s attached to this NCCP-sanctioned coaching course, Allen said that fee is within the bounds of other such sport coaching clinics in the country. In fact, he added, his gives just a little bit more than the others. “When we created this we did a lot of extensive research for that exact reason,” he noted of what at first seems a steep price to pay to participate.

“Now, we’re fully invested in the program. This was $50 for a half-day clinic. I did a lot of research of other sports (teaching) NCCP to make sure we’re on par. An additional perk is that lunch is included in our workshop while it isn’t in most other sports.”

In the future though the hope is to have more. Lots more as Golf Canada looks to reach far into the nation to foster growth in the game among youngsters. “One hundred per cent,” Allen said of smaller centre expansion plans going forward and the association’s hopes of turning out more volunteer coaches and good young players in coming years.

“This year for us is sort of a pilot year so we identified six major centres across Canada to get the ball rolling. Moving forward we’ll be hitting different areas,” in order to continue fostering that growth of the game.

To find out how you can become part of this exciting new program, contact Matt Allen, the PGA of Canada’s education coordinator, at 1-800-782-5764 ext. 236 or email matt@pgaofcanada.com.