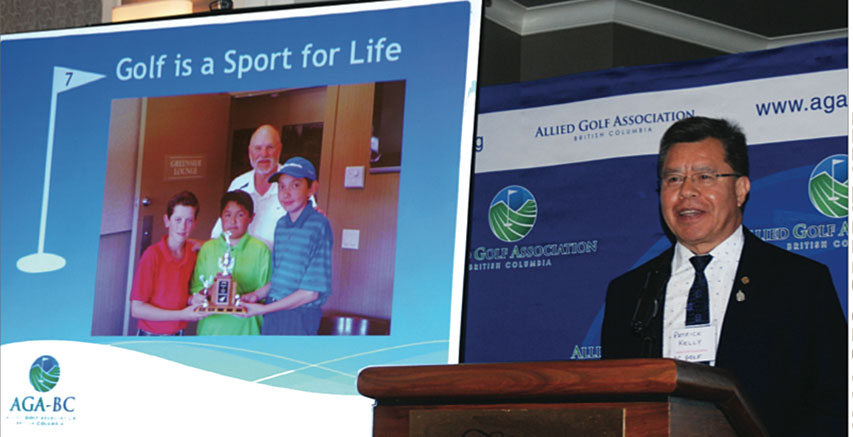 by Jeff Sutherland, Inside Golf

When the Allied Golf Association of BC (AGA BC) was formed four years ago, one of its chief aims was to present the needs and position of Golf in BC to government.

And if the fourth annual "Golf Awareness Day" held in late April in Victoria was any indication, they are doing a great job. Twenty MLA's came to a luncheon and got an update on where golf in BC is and where it is headed.

AGA BC frames the day in terms of a 9-hole golf scorecard. Think of a report card divided in three sections (Economic, Environmental and Health & Wellness) where the letter grades are replaced with birdies, pars, or bogeys. Industry leaders with expertise in each area then explain the reasons for the scores given.

Golf BC's Andy Hedley spoke about the economic value of golf to the province quoting some very impressive numbers. "Golf is big business in BC, it employs more than 44,000 people and 43% of them are students," said Hedley. "It contributes more than $2 billion to the BC economy and earns more than ski resorts, fitness centres, and spectator sports including the NHL. It also provides $465 million in taxes to the province."

Superintendent Dean Piller of Cordova Bay GC spoke on environmental aspects starting with the leadership role that golf plays in environmental stewardship. "The amount of green space the golf courses across Canada provide is equal to four times the size of Victoria. They provide wildlife habitats and wildlife travel corridors."

Piller went on to talk about another hot button topic, water. “We also feel golf is a leader in water conservation management; developing state of the art irrigation systems, exuding the use of reclaimed water and working on storm water retention systems that ensure water is filtered before reaching BC streams and lakes." Still, Piller conceded that water retention and conservation is one area that needs more work, indicated by the only bogey the AGA gave on the scorecard.

A highlight of the day was a presentation by Patrick Kelly, British Columbia Golf volunteer. Kelly, a member of the Leq:amel First Nation (Sto:lo Nation) in the Fraser Valley, now resides in Victoria and, as a member of Gorge Vale Golf Club, initiated a program in 2014 that has seen youth from the nearby Songhees First Nation become junior members.

"In the first year five young people took part in the program... and based on its success, local company Seaspan has committed to sponsoring 10 more for the next three years so the program can be expanded to 15 kids," said Kelly.

Kelly is clearly aware golf has the ability to build communication between groups, "Seaspan wanted to develop their relationship with the local First Nations and this (initiative) shows the relationship potential of golf to achieve this."

Another goal of the Golf Awareness Day is to promote initiatives and two in particular seemed to grab the MLA's attention, the 'Playground to Fairways (P2F)' program and the new 'First Green' initiative. The first sees kids being exposed to golf through the SNAG system in school gymnasiums while the First Green has kids heading out to golf courses to use them as science labs.

Summing up, AGA president Trevor Smith spoke about the need for partnership between industry and government. "What we would like to do is have you (government) join us on the back nine, join us in partnership. Golf courses are good for the environment and an important economic driver. They provide urban green space and, typically, every small community has a golf course that is a focal point for people getting together. We also want you to be part of the dialogue on water conservation, IPM (Integrated Pest Management) and growing the game."

The response from Minister of State for Tourism and Small Business, Naomi Yamamoto indicates they are listening, "It's clear that the government is aware of the value of golf. We encourage you to continue your dialogue with the Minister of the Environment and the other people in government to ensure that we can get you the support."