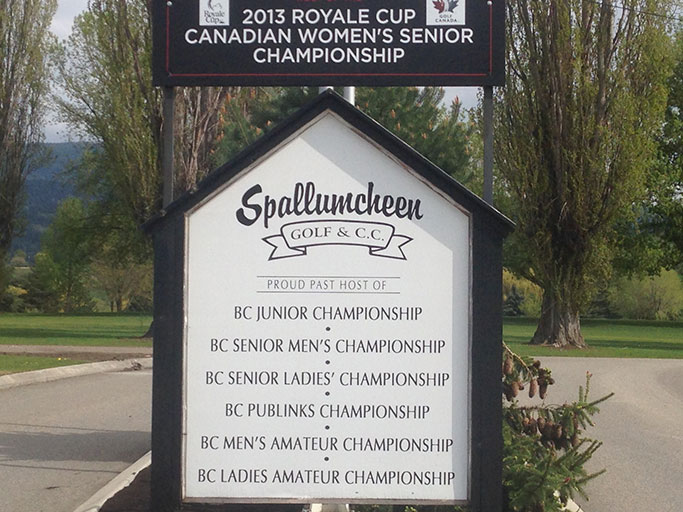 Vernon's Spallumcheen G&CC Is No Stranger To Hosting Championships

Just 10 minutes outside of Vernon, champions have been produced at the Spallumcheen Golf & Country Club.

So it’s no surprise that Spallumcheen will be hosting the best 16-and-under golfers for the British Columbia Golf Juvenile Championships Aug. 18-20.

The 54-hole stroke-play event (with a 36-hole cut) is scheduled to feature some of the best young players in the province, many of whom will be coming straight from Wood Buffalo, AB after representing British Columbia at the Western Canada Summer Games.

Among those eligible to play the BC Juvenile Championships include Team Canada member Alisha Lau, defending Juvenile Girls’ champion Shirin Anjarwalla, along with Khan Lee and A.J. Ewart on the boys’ side.

They’ll be hoping to add their names alongside 2004 BC Amateur champion James Lepp, who won at Spallumcheen and Vernon for his third of four BC Am titles, besting Lindsay Bernakevitch, current head pro at the Victoria Golf Club, by three strokes.

What sets Spallumcheen apart is the pride its members take in showcasing the course to outsiders. When the Canadian Senior Ladies took over the course two years ago, more than 100 volunteers made them feel at home and that’s what the juvenile boys and girls have to look forward to in August.

Longtime Head Professional Al Pisch has spent the better part of two decades grooming his successor and this year, he’s passed the title and responsibilities to Myles Johnson, who can still rely on Pisch to help out and offer advice. Johnson is a homegrown Spallumcheen product who didn’t pick up the game until he was 12 years old.

“I considered it a game for old men,” said the baby-faced Johnson. “I started playing at Hillview (in Vernon) and then I got hooked on it. My sport then was baseball and my coach was a member here so he brought me here, I met Al and the rest is history.”

Johnson compiled a good junior record at Spallumcheen and started working in the back shop before entering and completing the professional golf management program at Camosun on Vancouver Island. 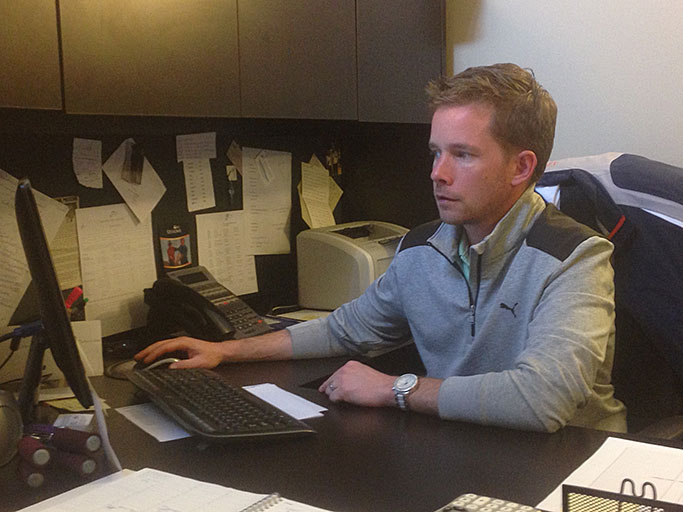 He never stopped working for Pisch and as Johnson showed he could handle any and all responsibilities, the decision to promote the young assistant pro to the top job was an easy choice.

“I knew the time was coming, so when I got the call, I was ready,” said Johnson. “The funny thing was I had just welcomed my first child, Carter John Johnson (with wife Katrina), so everything was happening at the same time for me.”

All these changes have had an effect on Johnson’s golf game, because he’s only had a chance to play three times since his son was born. But don’t think his game has gotten any worse, as his nickname amongst fellow professionals on the Interior Tour is Baby-Faced Assassin.

“My biggest accomplishment was when I shot 62 at Rivershore in a PGA of BC tournament,” said Johnson. “I came second to Bryn (Parry in the multi-day event) but I played so well that day.”

That 62 matches his best round at Spallumcheen, which is just one off the course record. Johnson said the secret to scoring well at 'Spal' is to know your game and play to your strengths. “This is a course you can play many ways,” he said.

“If you love hitting driver and you can hit it where you want, then you should play driver. But if you don’t want to hit driver, you can be conservative and still score.”

Johnson said the key to going low is to play the first six holes well because water comes into play on five of those holes and 12 of the 18 holes on Spallumcheen’s championship course.

“There’s a little bit of trouble that lurks on each of these holes so if you’re not careful, you can be three or four over after those six holes,” said Johnson.
Make it through that gauntlet and there’s a respite from the water, but water comes back into play on four of the last five holes.

The 14th hole features water all along the right hand side, while the 16th is a dogleg right that plays to 338 yards from the tips. Don’t be surprised to see the tees moved up to tempt long hitters on this hole, but going for the green is fraught with danger as anything short is wet.

The 17th appears to be a benign 131-yard par 3, but the back tees to the right make for a tee shot that has to split a couple of trees and play over Chappy’s Island.

In comparison, the regular white tees to the left are only 121 yards, with a clear view to the hole, but still the water is in play short.
The finisher is a straightaway 567-yard par 5, with water coming in short left or long right, near the green.

As for Johnson’s favourite hole, he loves the 542-yard 8th, a reachable par 5 which has a special significance for Johnson. “I made my only double-eagle ever on that hole,” said Johnson.

“I had 245 yards downhill and hit a great 3-wood to a back pin. We couldn’t see it at first but I knew I was long enough. I walked up and found it in the hole.”

As for the hole he thinks will surprise the juveniles, he points to the 412-yard par 4 13th. “It looks pretty inconspicuous but the creek is OB (out of bounds) on the left and if you try to protect yourself by hitting it right, there’s a grove of trees that will block out your approach. The green is a double green (shared with the 16th) and there’s 40 yards from front to back so you could be facing a long putt once you get on.”

Johnson said players with a familiarity with the course will have a decided advantage. “You have to know where you can miss it and where you can take your shots,” said Johnson.

“The kids now are so good that we expect them to go low, but there are spots where they have to stay out of.” The best thing for Johnson is that when the juveniles arrive at Spallumcheen, he’ll no longer be the youngest looking person at the course.

For more information, go to www.spallumcheengolf.com