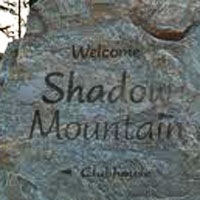 The golf course at Shadow Mountain has been sold to a buyers' group out of Edmonton.

According to a story posted on the website of the Cranbrook daily, The Townsman, the receiver-manager in charge of Shadow Mountain Golf Ltd. confirmed that the property has been sold to a buyers group out of Edmonton.

The receiver-manager, who had been court appointed on January 8, 2013, was not appointed, however, over Shadow Mountain Properties Ltd. and so doesn't have authority to provide information on the property development at the location.

The Townsman reported that no further details of the nature of the purchase were available as of their press time.

In 2007, Cranbrook’s city boundary was expanded for the inclusion of the Shadow Mountain development. The city was notified by the Ministry of Community Services that the boundary expansion application had been approved through an order of council and included Shadow Mountain.

According to the city's report at the time, Shadow Mountain consists of 232 hectares of land incorporated into the city as part of the larger "St. Mary Neighbourhood" boundary extension approved in October 2007.