Luna Lu Bounces Back To Win BC Junior Girls Championship 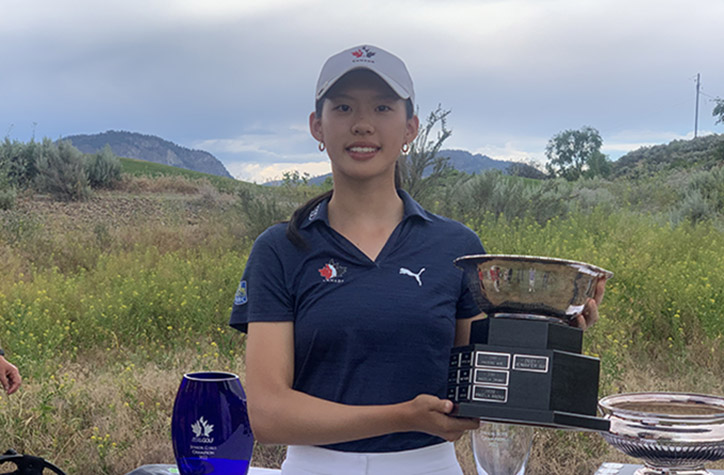 OLIVER -- This time, there was no heartbreak on the 18th hole. Instead, Luna Lu was just about perfect in the final round of the B.C. Junior Girls Championship at Nk’mip Canyon Desert Golf Course.

The 15-year-old Burnaby resident shook off the final-hole disappointment at the recent B.C. Women’s Amateur Championship and played a near flawless round, a bogey-free five-under 68, to win the championship for girls under the age of 19.

And yes, this one will most definitely help Lu forget about that quadruple-bogey on the 18th hole that cost her a chance to win the B.C. Women’s Amateur two weeks ago at her home course, Pitt Meadows Golf Club.

“Yeah, it feels so nice to win after what happened at the B.C. Am where I choked a little bit on the last hole,” said Lu. “To be able to win here means so much to me.”

The funny thing is, Lu didn’t know she had won until her playing partners -- Amy Lee of Langley and Tina Jiang of Richmond -- told her as they walked off the 18th green. “I really wasn’t keeping score,” said Lu, a member of Golf Canada’s national junior team.

“I knew I was having a pretty good day. They were saying congrats to me and I really didn’t know I had won. So I was asking them, did I win, and I think it was Amy who told me I had won. I thought we were all pretty close.” Lu won by a single shot with a impressive 72-hole total of seven-under par to edge the 14-year-old Lee.

Lu began the day in third place at two-under par and trailed Jiang by three shots and was one shot behind Lee. She moved into contention with three front-nine birdies but still trailed Lee by two shots as they walked off the 14th green. The tournament was won with birdies on the 15th and 16th holes.

“I hit my gap wedge on 15 to two feet and made it and then the next hole I hit my lob wedge from 40 yards to one foot,” Lu said. “Those were big shots.”

Lee bogeyed the 15th hole after her approach from the rough came up well short of the green and she could only manage a par on the par 5 16th. “I didn’t hit the approach shot on 15 very clean,” Lee said. “I was in the rough and I should have clubbed up. That was a mistake. But I could have made an up and down.” 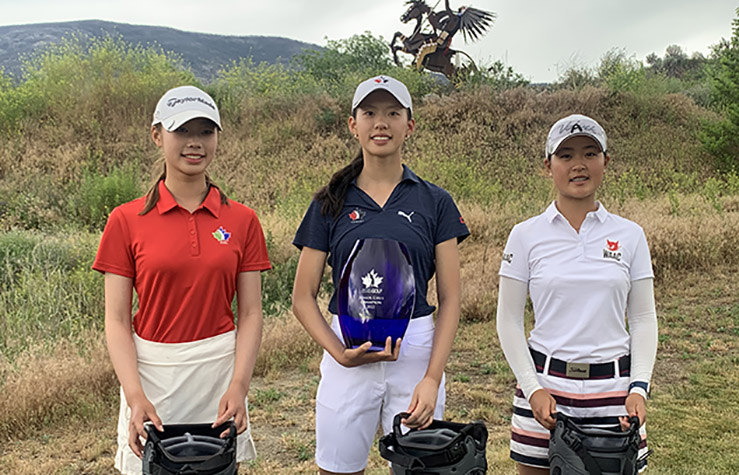 Lu, who is heading into Grade 10 at Burnaby North Secondary, credited her strong finish to Thursday’s final round with giving her a chance to win. She finished that third round with two birdies and an eagle on the last three holes. Had she made pars there, she likely would have been too far back to mount a comeback.

“Those three holes definitely gave me some momentum and helped me start off my round pretty well and then I stayed consistent,” Lu said. “I didn’t have any bogeys today and I am really happy about that. That doesn’t happen often. This may be only my third tournament round with no bogeys. And I think five-under is the lowest tournament round I have ever had.”

There were some nerves coming home. On the short par 3 17th, which plays over water, the wind was swirling. But Lu stuck her wedge seven feet behind the hole for a good look at birdie. She ran her birdie putt a good three feet past the hole. “I hit that one a bit firm,“ she said. “I had about three feet coming back and I was nervous standing over that one.” Lu clinched her win with two-putt par from the back fringe on the 18th hole.

Despite that costly bogey on No. 15, Lee played solidly all day. She shot a three-under 70 in the final round. “Obviously, I am am not satisfied with the result, but I am very honoured to play with such good players,” Lee said. “They’ve been like legends to me, they have always been up ahead of me. I am really pleased and happy I was able to play with them and see their course management up close. I can learn from them.”

Lu, Lee and Jiang, who finished third at four-under par, will represent B.C. at the Canadian Junior Girls Championship, which goes July 26-29 at The Marshes Golf Club in Ottawa.

A two-person best-ball competition was also held. Ryan Vest of Vernon and Braxton McDonald of Coldstream won with a total of 22-under par. The team of Matthew Wilson of Nanaimo and Cooper Alexander of Saanichton were one shot back in second place.

CHIP SHOTS: Osoyoos Indian Band chief Clarence Louie was on hand to present Lu, Lee and Jiang with their championship medals. . . Next summer’s B.C. Junior Girls and Boys Championships are scheduled to be played at Prince George Golf Club.