After shooting a three-over 75 in the first round of the Canadian Junior Girls Championship, Yeji Kwon really wasn’t thinking about winning the event.

She was more concerned about fixing her swing. “After that 75, I was really unhappy with my shots in general, so after the round I made a couple of changes to try and get my swing more on plane,” Kwon said. “That seemed to help.”

Did it ever. The 16-year-old Port Coquitlam resident followed up with rounds of 67, 65 and 70 and not only won the championship, but beat the rest of the field by nine shots at The Marshes Golf Club in Ottawa.

Kwon, a member of Golf Canada’s national junior team, won with a 72-hole total of 11-under par. “This means so much,” a delighted Kwon said over the phone.

“I have been working really hard all summer and to win the Canadian Junior Championship, well, it really hasn’t sunk in yet. But I am really proud of myself and to represent the country as part of Team Canada is really special.”

Kwon took control of the tournament with her middle two rounds. Both of them started with a bang as she eagled the par 4 first hole with near identical shots in the second and third rounds. “That was crazy,” she said. “They were both 76 yards and they both landed a few feet past the hole and spun back and went in.”

She began the final round with a five-shot lead, but tried not to think about the big cushion she had. “I just tried to think of it like it was the first day and just play my game,” she said. “And I think that helped me block all the pressure and stuff like that.”

Kwon, who is heading into Grade 11, plays out of Swaneset Bay Golf Course in Pitt Meadows. She earned her first big win two years ago when as a 14-year-old she won the Alberta Ladies Championship. 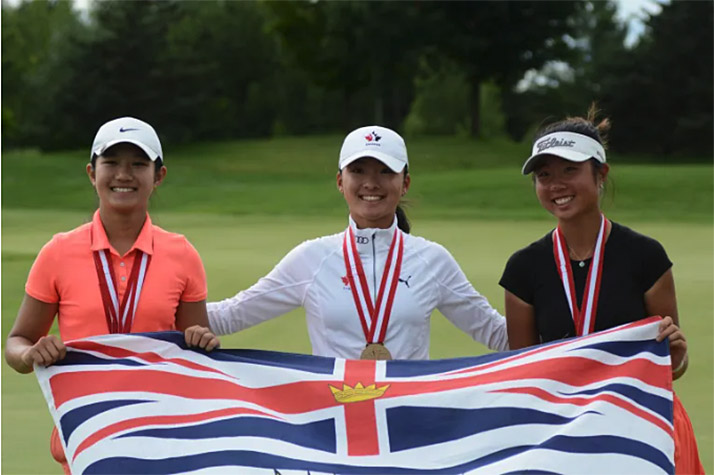 Kwon won two national titles at The Marshes. She also captured the Canadian Juvenile title for girls aged 16 and younger.

Kwon headlined what was a terrific performance by B.C. players at the Canadian Junior. Vancouver’s Lucy Lin was second at two-under and Erin Lee of Langley was third at one-under.

Five of the top six finishers were British Columbians as Amy Lee of Langley and Anna Huang of Vancouver finished in a three-way tie for fourth at one-over par. Burnaby’s Katherine Hao, who tied for eighth, also finished in the top 10.

“It shows how many good players we have in B.C.,” Kwon said. “We have so many good courses in B.C. and with organizations like British Columbia Golf helping junior golf, we have a lot of girls playing at a high level.”