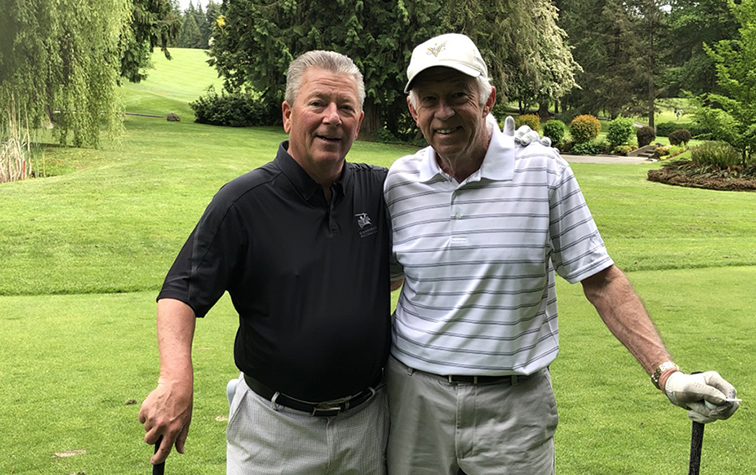 Puder won the 1987 B.C. Amateur at Rivershore in Kamloops, where he beat Doug Roxburgh and Steve Berry by two shots. “A very fine man,” said Roxburgh.

“I remember I played with him and Steve Berry in the final round of the B.C. Am at Rivershore when he won. On 17 he had a two-shot lead but hit his iron fat about 30 yards short of the green.

“It was always hard to watch him chip, but he hit a beauty to six inches. He parred 18 and won. A popular victory.”

Puder added the B.C. Senior Men’s title in 1996 at Myrtle Point in Powell River before completing his ‘triple crown’ by winning the B.C. Mid-Amateur title at his home club in 2001 at age 63. Puder won the club championship at Vancouver Golf Club 10 times and was runner-up on eight occasions. The club championship trophy is now named after him.

“He was the first player I ever played with at Vancouver Golf Club,” Batchelor said. “He was a fantastic guy and such a gentleman. Even with his illness his swing never changed.”

Puder is survived by his wife Eileen.

BIG BUCKS: Abbotsford’s Adam Hadwin and Roger Sloan of Merritt are both in the field for this week’s Players Championship, which is offering a purse of $20 million. The winner will take home $3.6 million.
Fellow British Columbians Adam Svensson of Surrey and Nick Taylor of Abbotsford are on the alternate list and are unlikely to draw into the field.

Taylor tied for 32nd at last week’s Arnold Palmer Invitational at Bay Hill in Orlando, Fla., while Svensson missed the cut. Sloan and Hadwin both took the week off. Taylor finished the event at five-over par, 10 shots behind winner Scottie Scheffler. Taylor earned $67,000 and moved up three spots to 87th on the FedEx Cup points list.

TOUGH START: The Simon Fraser University women’s golf team had an unfortunate start to their spring season when they were forced to withdraw from the Tim Tierney Shootout in Alameda, Calif., due to positive tests for COVID-19. Three SFU players did compete on the second day of the tournament as individuals.

Shirin Anjarwalla was the top SFU golfer. She tied for 32nd at 11-over par. “We are short-handed this season so any illness or injury has a magnified effect,” said SFU head coach Matt Steinbach. “It seems like all teams have had challenges with COVID this year, but in golf they don’t postpone tournaments if a team isn’t able to field a roster.”

HISTORY MADE: Vancouver’s Leah John tied for 21st at the Gunrock Invitational in Sacramento and also witnessed a little history. John, a junior at the University of Nevada and the reigning B.C. Women’s Amateur champion, shot rounds of 70, 69 and 76 to finish the event at one-under par.

The event was won by Stanford, the top rated NCAA women’s team, which finished a combined 50-under par. It marked the first time a NCAA women’s team had reached the half-century mark in an event. Stanford’s Rachel Heck won the individual title with a score of 18-under par. Stanford won the team title by 35 shots.

NEW NAME: One of Metro Vancouver’s oldest golf courses is getting a new name. Surrey’s Peace Portal Golf Course, which was sold last fall to new local owners, has been rebranded as The Hills at Portal Golf Club.

Extensive clubhouse renovations are underway and a deck has been added to the end of the building. New ownership has said improving conditioning at the course is a top priority. A plan is also in the works to tinker with the routing of the course.

USGA APPROVAL: MindTRAK Golf, the mental fitness mobile app designed to assist golfers develop a focused mindset to optimize performance during a round, has been given the green light by the United States Golf Association.

The system, designed by former PGA TOUR winner Richard Zokol, consists of player entry of scores for assessment and execution of each shot made during a round, which is analyzed and reviewed post-round.

It is designed to be a coaching tool that helps coaches analyze their player’s performance in addition to allowing users to access and remain “in the moment” on every shot. The USGA ruled last week that MindTRAK is “Permitted under the Rules of Golf.”

CHIP SHOTS: Men’s and women’s teams from UBC, University of the Fraser Valley and UBC-Okanagan are among those competing in this week’s University of Victoria Vikes Canada West Spring Shootout at Cordova Bay Golf Course. . .The Marine Drive Amateur is returning after a two-year absence. It’s scheduled for May 27-28. Entry fee for non-members is $325. More information is available at golf@marine-drive.com or by calling 604-261-3212.