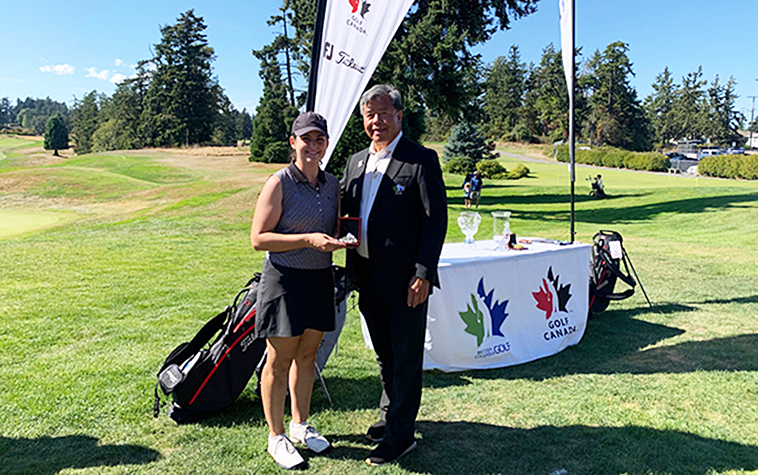 Jessica Claggett of Kelowna has been declared the winner of the B.C. Women’s Mid-Amateur Championship after Victoria’s Alyssa Herkel was disqualified due to a rules infraction.

Tournament director Doug Hastie said Herkel contacted him over the Labour Day weekend to discuss a shot she attempted on the seventh hole during the final round of the event, which was held Aug. 31-Sept. 2 at Gorge Vale Golf Club in Victoria.

Herkel told Hastie she “whiffed” a chip shop attempt from the rough on the par 5 hole.

“She contacted me by email first and then we talked on the phone,” Hastie said. “Because she didn’t hit anything, not the grass or anything, she thought it didn’t count. Then she started thinking about it -- in her words she ‘You Tubed’ it and saw that it might not be right. Then she made the phone call.

“I asked her specifically, did you intend to hit the golf ball, and she said, 'yes, I intended to hit the ball.'”

Herkel signed for a six and actually had a seven on the hole and Hastie had no other choice but to disqualify her for signing an incorrect scorecard. “I think we should commend Alyssa for coming forward,” Hastie said. “This is not something that was passed on by somebody else. She came forward. We don’t think there was any wrongdoing on her part, it was just a misunderstanding of the rules.

“It goes to show again how important it is to know the rules of golf or if you are unsure to definitely ask somebody or bring it up to a rules official or in the scoring tent and make sure it is handled before you sign your scorecard.”

Claggett, who had finished the 54-hole event three shots behind Herkel, was more than a little surprised to get the news. “I think I am still in shock, actually,’ Claggett said. “I got an email this morning. I’d had a few days to process coming second and coming up a little bit short. This was definitely out of the blue and unexpected.”

Claggett, a 26-year-old who is food and beverage manager at Two Eagles Golf Course in West Kelowna, immediately reached out to Herkel. “It is definitely bittersweet,” Claggett said. “My heart hurts for Alyssa. It’s definitely not the way I wanted to win a tournament. I just reached out and commended her for having the courage to come forward and make Doug and the B.C. Golf team aware of what happened and let her know I am still proud of the way she played and hopefully we get to compete again next year.”

Claggett comes from a golf family. Her dad, Dean, is a longtime member of the PGA of BC and is general manager at Two Eagles. After struggling the first day at Gorge Vale, Claggett bounced back to shoot a tournament-low two-over 74 in the second round and closed with a 78.

She said Gorge Vale’s lightning-fast greens presented a stiff test. “I hit 16 greens Day 2 and played really solid and kind of rode that into Day 3 and fought a few nerves trying to mount a comeback. . .It was a great test.”