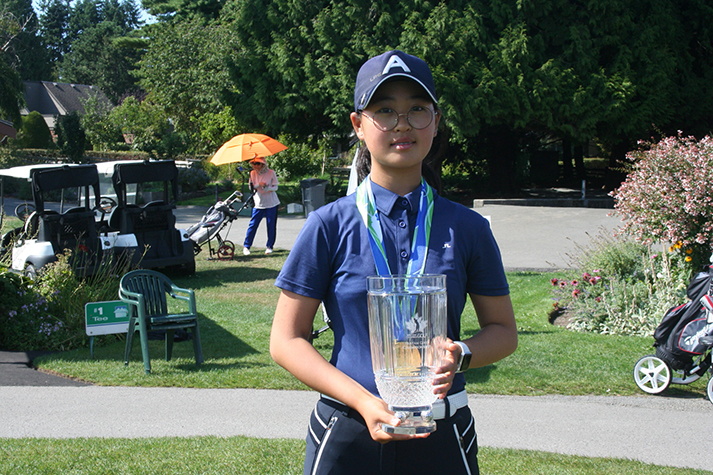 A funny thing happened when Langley’s Amy Lee made back-to-back birdies on the back nine during the final round of the B.C. Bantam Girls Championship at Langara Golf Course.

The 13-year-old suddenly started believing she could win the tournament. “Those birdies gave me some momentum and some courage to go for it,” Lee said after after she beat Grace Yao of West Vancouver in a sudden-death playoff. “At the beginning of day I thought I had no chance.”

Lee shot a two-under 69 to finish the 36-hole event at one-over par and tied with Yao, who closed with an even-par 71.

Their playoff started and ended on the par 4 first hole, where Li won it with a par. Yao’s drive went right and settled near a penalty area. She had to punch out into the fairway.

“I hit a good approach with my lob wedge to about eight feet but I didn’t make the putt for par,” Yao said. “I missed it on the low side.” Lee had stuck her approach to within eight feet and a two-putt par gave her a win she did not see coming.

Lee said she had not played well at last week’s B.C. Juvenile Girls Championship at Golden Eagle Golf Club in Pitt Meadows, where she tied for 12th, and wasn’t exactly full of confidence when she arrived at Langara.

She began the final round two shots behind first-round leader Katherine Hao of Burnaby and one shot behind Yao. “Actually this morning I had no expectations and I didn’t think of winning,” she said. “It wasn’t until towards the end of my round that I kind of had a little thought that maybe I had a chance to win.

"I got those two birdies and I was able to think about winning. Grace was a real tough competitor and we had a very fair match and I am just glad I was able to finish with that par.” 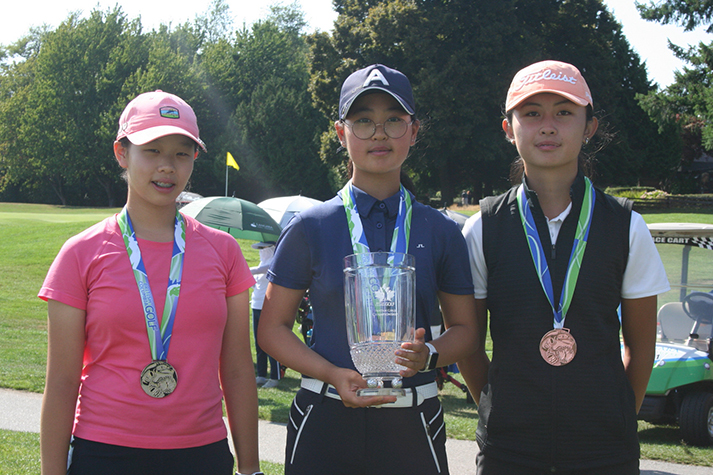 Lee, who plays out of The Redwoods in Langley and is entering Grade 8 at Walnut Grove Secondary, had five birdies in her final round. She played quickly all day. Once she had chosen a club, she didn’t waste any time over the ball. “I consider myself a fast player because I feel like if I dwell or think more I start having a second opinion. For me, hitting it fast after I make a decision and am determined helps me play better.”

While disappointed about losing in the playoff, the 13-year-old Yao was happy with her play. She, too, exceeded her own expectations. “I am feeling positive because this was my first time in a playoff so it is good for experience,“ she said.

“And also, I wasn’t expecting to even have a chance to win the tournament because I haven’t played golf as long as Amy or Katherine, so I was pretty glad I got in the top three.” Hao closed with a two-over 73 to finish third, one shot behind Yao and Lee.

Net better-ball and net Stableford competitions were also held. Emma Kim of Victoria won the Stableford event with a total of 81 points. Lotay was second with 77 points.

The better-ball competition was won by the team of Gordon Chen of Burnaby and William Jee of Port Moody, who finished at 17-under par. That was one shot better than the team of George Zhou of Vancouver and Harley Liu of Burnaby.

Next summer’s Bantam and Novice championships will be played at Shadow Ridge Golf Course in Kelowna.