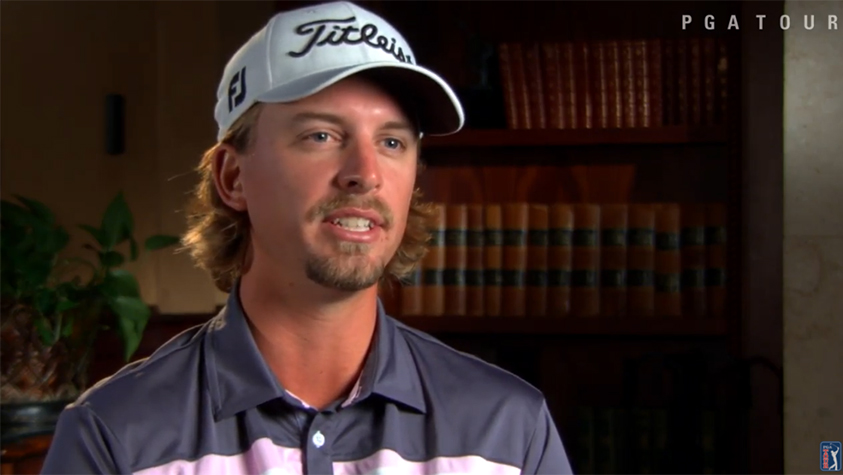 The biggest week of his golfing life didn’t start quite the way Merritt’s Roger Sloan had hoped. There were more bogeys than birdies in his opening round of the Wyndham Championship and Sloan knew that had to change in a hurry. Thankfully, it did and things turned out better than he could have imagined.

“This was such an incredible week,” Sloan said over the phone after losing in a six-man playoff at the Wyndham Championship. “I had some jitters knowing what had to be done this week when I teed off on Thursday and I think I was three-over through 11 holes and at that point there’s nothing left to lose. That just freed me up a little bit and we were able to play 18-under the rest of the way and get ourselves in a playoff. So a really cool story and just a really cool week here.”

Sloan didn’t get the ultimate prize -- a win at the regular season-ending Wyndham -- but he accomplished so much else. He had arrived in North Carolina 131st on the FedEx Cup points list and knew he likely had to finish inside the top 20 to crack the top 125 to retain his fully exempt status for next season and qualify for the playoffs.

He accomplished that with clutch rounds of 64, 64 and 66 on Friday, Saturday and Sunday. “Obviously, I feel great,” Sloan said. “I actually played very well in the playoff to give myself an opportunity on both the holes to make a birdie. Six guys, someone is going to hit it close. I am very proud of how I played the playoff holes and very thankful that we get into the playoffs starting next week and have full status for next season.”

Sloan has played some solid golf to salvage his season and retain his exempt status for the 2021-22 PGA TOUR season, which begins in about a month. He has made his last six cuts and nine out of his last 10. He was sixth last week at the Barracuda Championship and followed that up with his tie for second at the Wyndham.

He jumped from 131st to 92nd on the FedEx Cup points list, meaning he’s in the field for this week’s first playoff event, The Northern Trust at Liberty National Golf Club in Jersey City, N.J. There will be no trip back to the Korn Ferry Tour. “If you look at this year in its entirety, statistically it has been the best year that I have had as a professional,” Sloan said.

“I have just struggled to put four rounds together and what you are starting to see here in the last six or seven tournaments is that I am starting to string together four good rounds. I really like how my game has showed up every single week. Now we’re going to go to Liberty National and do what we have been doing all year long, tee it up on Thursday and do my thing. Be Roger Sloan.”

In recent weeks Sloan had talked about not focusing on the top 125 and the consequences of not making it. But he acknowledged that was easier said than done. “It is extremely challenging to be honest with you. It is so easy to put that in the forefront of your focus that you want it so badly, you want to qualify for the playoffs, you want to have a full schedule for the next season.

"I think it was a challenge for me, how do we overcome that, how do we focus on what is important, what are the elements you can control. I am very thankful that I was in a position where I was able to do that and have access to my skills and play three really phenomenal rounds of golf on Friday, Saturday and Sunday.”

Sloan was proud of the way he played in the six-man playoff that also featured eventual winner Kevin Kisner, Adam Scott, Kevin Na, Brendan Grace and Si Woo Kim. Sloan was the lone member of the playoff without a PGA TOUR win. He striped drives down the middle of the fairway on both playoff holes and hit solid approach shots. “Considering the circumstances I hit probably my two best drives of the day,” he said.

“They went the exact same number so I had the exact same yardage on both shots. The first one I didn’t have a lot of wind, I kind of knocked down a six-iron and used the slope to get it close. The second time we had a little more breeze pick up helping downwind. I hit one less club and wasn’t able to turn it over enough it stayed at the top of the ridge. But I executed well. I played the hole flawlessly, two fairways and two greens in regulation and gave myself two putts at it. That’s all you can ask for.”

His wife Casey and their two children -- soon to be four-year-old daughter, Leighton, and son Jade, who turns two in November -- were green-side for the playoff. Sloan said their presence helped put things in perspective
“My wife picked them up from the child-care service and brought them out to the golf course for the playoff and I looked over there at one point and I think they were about ready to fall asleep,” he said with a laugh.

“I don’t think they had an idea what was going on, which is cool and a breath of fresh air. It is a unique perspective when you look over there and you realize it’s not that big of a deal at the end of the day. The kids bring a cool perspective to it.” Sloan earned $389,440 for his tie for second.

B.C. STRONG: Sloan’s play highlighted quite a week for the three British Columbia players on the PGA TOUR. The Abbotsford duo of Adam Hadwin and Nick Taylor both tied for 10th place at 13-under, marking the first time three B.C. players have finished inside the top 10 at a PGA TOUR event.

“That is a great story,” Sloan said. “I noticed in the middle of my back nine that Nick Taylor had posted a great score. You see that and it’s, all right, I want to finish at least at 13 (under), too, I don’t want Nick to beat me. There’s kind of a friendly competition that we have among us.

“We have a great history among the three of us. Obviously Nick and Adam grew up closer to each other but I was in the mix at provincial and national tournaments. The three of us have a great friendship and I think we all cheer on each other.” In fact, Hadwin hung around to congratulate Sloan on his play. Sloan hopes results like this one inspire B.C. youngsters.

“For all three of us to have a really good week, I think it is great for us, it’s great for B.C. golf and hopefully it inspires some other B.C. juniors to get out here on the PGA TOUR.”

FAMILIAR TERRITORY: Hadwin moved up 16 spots to finish 96th on the FedEx Cup points list and has a spot in the field at Liberty National. It’s a course Hadwin is familiar with, having played it as a member of the International team at the 2017 Presidents Cup. Taylor moved up eight spots to finish 141st on the FedEx points list. He won’t qualify for the playoffs, but remains exempt for the 2021-22 season due to his win at the 2020 AT&T Pebble Beach Pro-Am. Sloan and Hadwin must move up inside the top 70 to qualify for next week’s second playoff event, the BMW Championship in Owings Mills, Md.

PROMOTION TIME: Surrey’s Adam Svensson officially received his PGA TOUR card for the 2021-22 season at a ceremony following the Pinnacle Bank Championship, the Korn Ferry Tour’s final regular-season event. Svensson, who missed the cut at the Pinnacle, finished the season 10th on the Korn Ferry Tour’s points list to earn his second crack at the PGA TOUR. Vancouver’s Stuart Macdonald tied for 43rd and finished the regular season 60th on the points list.

By finishing inside the top 75, Macdonald earned a spot in the three Korn Ferry Tour Finals events, where the top 75 KFT finishers and players finishing 126th to 200th on the PGA TOUR FedEX Cup points list will compete for 25 additional PGA TOUR cards. The first of those three events, the Albertson’s Boise Open in Idaho, goes this week. Although he has his PGA Tour card locked up, Svensson will compete in the KFT Finals events as he can further improve his position.

JUVENILE CHAMP: Vernon’s Cooper Humphreys had quite the week at the Canadian Junior Boys Championship in Quebec. Humphreys tied for second at nine-under par, just one shot behind winner Jean-Philippe Parr of St. Celestin, Que. Humphreys won the Juvenile championship for players aged 16 and under, which was held concurrently with the Junior Championship, by a whopping 13 shots. Victoria’s Jeevan Sihota tied for fourth in the Junior competition.

BRING ON THE BANTAMS: Vancouver’s three municipal courses have lots going on this week. Langara Golf Course plays host to the B.C. Bantam Girls and Boys Championship on Monday and Tuesday. The 36-hole competition is open to players aged 14 and under. The Vancouver Golf Tour’s marquee event, the Vancouver Open, goes Friday through Sunday at Langara, McCleery and Fraserview.

BIRDIE-FEST: Kimberley’s Jared du Toit closed with a seven-under 64 and tied for 44th at the Forme Tour’s Fuzzy Zoeller Classic in Sellersburg, Ind. Du Toit’s 11-under total was 15 shots behind winner Trevor Werbylo of Tucson, Ariz. Riley Wheeldon of Comox tied for 56th at eight-under par. This tour moves to Maineville, Ohio, for this week’s event, the Forme Open at TPC River’s Bend.

COLLEGE REUNION: Mike Weir had an old friend on his bag at the PGA Champions’ Shaw Charity Classic in Calgary. Vancouver native Jeff Kraemer, who attended Brigham Young University with Weir back in the late 1980s and early ’90s, caddied for Weir in Calgary and helped guide him to a tie for ninth finish. Kraemer won the 1991 Canadian Amateur at Royal Ottawa Golf Club, where he happened to beat Weir by two shots.