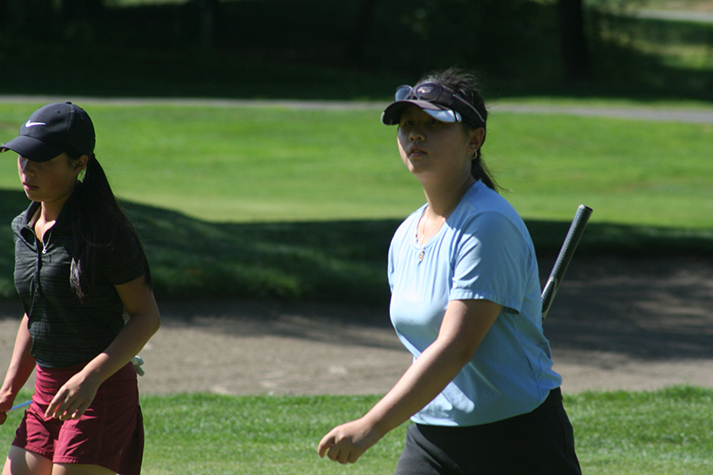 PITT MEADOWS -- Birdies, bogeys and bears. That was the story of Tuesday’s first round of the B.C. Juvenile Boys and Girls Championships at Golden Eagle Golf Club.

Golden Eagle’s South Course surrendered its fair share of birdies to the 31 girls and 83 boys who are playing in the championships for players aged 16 and under. But there were also plenty of bogeys and others on a tight South Course that demands precision shot-making off many of its tees. There’s lots of trouble to get into.

As for the bears, they were more entertainment than a nuisance as they wandered onto the course frequently during play. Rules officials had to use their air horns to try and clear them off the course. At one point, a bear decided to take a dip in one of the many ponds on the course.

Coquitlam’s June Hsiao managed to keep her focus on the golf as she shot a two-under 68 to grab the girls’ lead. Lucas Kulai of Cobble Hill, Coquitlam’s Ethan Posthumus and Louis Chun of Port Coquitlam share the boys’ lead after shooting two-under 68s.

The 14-year-old Hsiao, who plays out of nearby Pitt Meadows Golf Club, had five birdies in her round. “I didn’t get everything out of my round, but overall I think it was a pretty consistent round,” said Hsaio, who is heading into Grade 9 at Centennial High School. “I managed to stay out of most of the trouble.”

Hsaio finished off her round in style, rolling in a 30-footer for birdie on the 18th green. “I feel like the one thing you really have to be good at on this course is hitting it well of fthe tee,” she said. “There’s a lot of ways you can make bogey by hitting it off-line just a bit.” Hasiao didn’t hit many drivers Tuesday. “I am a little bit of a longer player so I played mostly hybrids and irons off the the tee,” she said.

Hsiao has a two-shot lead on Rebecca Kim of Victoria, whose even-par round of 70 included five birdies. “I don’t know how I shot even par with five birdies,” Kim said with a laugh. “I was all over the place today a little bit.”

Kulai, a 16-year-old who plays out of Arbutus Ridge Golf Course, credited a hot putter with helping him grab a share of the lead. “I stepped up to almost every putt I looked at today and I was confident about it,” Kulai said. “I had six birdies today, so that was big for me.”

Posthumous is coming off a win at a Vancouver Golf Tour event at Newlands on the weekend. He had three birdies and a bogey in his round. “I suppose it was a good start,” he said. “I am just trying to get used to the course. My irons were really solid and I gave myself a lot of birdie opportunities. Unfortunately, I didn’t make as many as I wanted to. It was quite a boring round.”

Chun, 14, is heading into Grade 9 at Terry Fox Secondary. “It felt pretty good,” he said of his round. “My putting was a little off today but I clutched up and made them when I had to. I had some lucky moments, but overall I had a pretty good round today. Matthew Wilson of Nanaimo and Harvey Liu of Surrey are tied for fourth after both shooting one-under 69s.

The field will be cut in half following Wednesday’s second round.