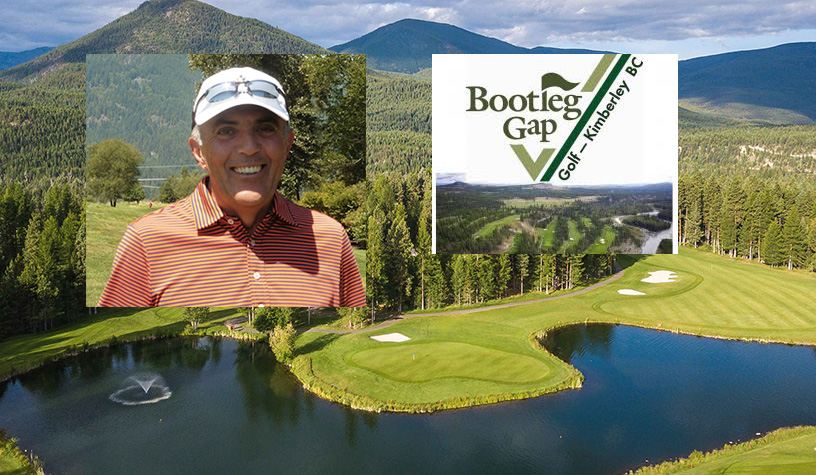 Kimberley's Bootleg Gap Golf Course is receiving high praise from many players who are seeing it for the first time; Three players are tied for first-round lead Including John Gallacher (Inset)

KIMBERLEY -- John Gallacher recently turned 70 so the fact he shot a four-under 68 to share the lead after Tuesday’s first round of the B.C. Senior Men’s Championship at Bootleg Gap Golf Course was noteworthy. But Gallacher, a two-time B.C. Senior Men’s winner from Burnaby, was more interested in talking about the golf course than his impressive play.

“I think this is the best course we have been at since the Canadian Senior was at Capilano (in 2014) or maybe since I have been a senior,” Gallacher said of Bootleg Gap after his round, which left him tied with Jim Shaw of Sooke and defending champion Norm Bradley of Kelowna.

Gallacher was not alone in his praise of the Les Furber-designed layout, which earlier this year was purchased from the City of Kimberley by Trevor Simkins and his dad Harold. Trevor started at Bootleg way back in 2004 as an assistant pro and worked his way up to general manager. Harold was a longtime head pro and general manager at Kamloops Golf & Country Club.

Gallacher and Pemberton’s Lance Lundy, who won last year’s Super-Senior championship for players 65 and older, came to Kimberley early last week to play some golf and prepare for this week’s event. “We came four or five days early to play golf courses in the area,” Lundy said.

“We liked this golf course so much it's the only one we've played. The golf course is set up perfectly. I think it's one of the best designs that Furber has ever done. The condition of the golf course is exceptional and I think the operation of it and how it is being run is even more exceptional. I am thrilled for Harold Simkins and his son. I have known Harold for 35 years. It couldn’t happen to a nicer guy.”

Gallacher credited a hot putter for helping him go low Tuesday. He also acknowledged that having all those practice rounds helped. “It was just that the putter worked today,” Gallacher said. “I had good speed, a couple fell in on the front edge. Those five practice rounds were also a big plus. It makes a difference.”

Gallacher last won the event in 2015 when he held off Doug Roxburgh at Swaneset Bay in Pitt Meadows. He hopes he’s got another one in him. “I haven’t been playing well lately, so it is nice to get one good round in to start.”

Shaw has come close before in the Senior Men’s and his 68 put him in great position to take a run at the title. Like Gallacher, Shaw gave credit to his putter. “The last little while I have been putting pretty well,” Shaw said. ”I chipped in for one of my (five) birdies, the birdie on No. 10 was two inches and the rest were 12 to 14 feet. I also made a couple of big par saves of five or six feet which really helps keep your momentum going.”

Shaw also fell in love with Bootleg Gap, a course he saw for the first time in Monday’s practice round. “It’s very, very good,” Shaw said. “I knew a little bit about what I was getting into because it’s a Les Furber design and he’s pretty consistent with his green designs. But it’s a really nice course. It’s all right in front of you.”

Bradley birdied his final hole late in the day to grab a share of the lead. “This is a challenging course,” Bradley said. “There are some tough shots out there. You are required to hit some golf shots. I was patient on the front nine knowing that pars were okay and not forcing anything. I just kind of waited for things maybe to happen.”

Roxburgh, a five-time champion, opened with a four-over 76, but that in no way soured him on Bootleg Gap. “It’s fabulous,” he said. “I heard good things about it before I came up here and it has lived up to it. It is a really good test of golf. Some of these vistas would be just spectacular without that bit of smoke we have today. It’s a great layout.”

Another past champion, Sandy Harper of Nanaimo, said he has heard nothing but positives from fellow players. “I talked to a lot of players who said they were really pleasantly surprised when they got here because a lot of people didn’t know what to expect,” Harper said. “It’s pretty cool. And it’s such a great story of how the Simkins family bought it. It’s kind of a feel-good story in these bad times.”