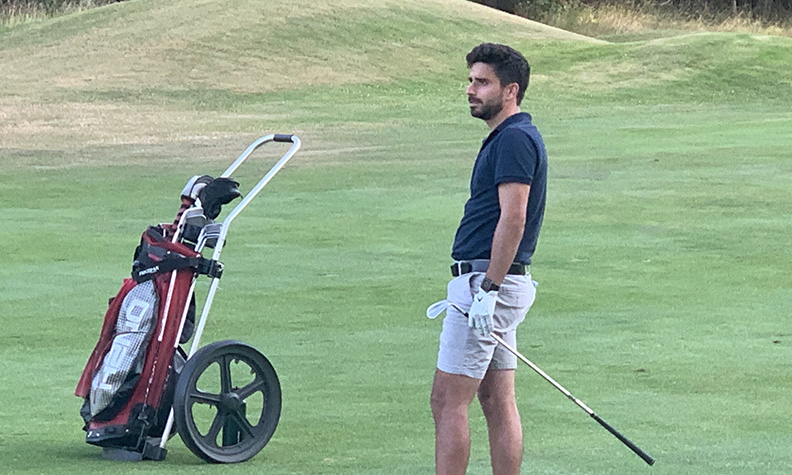 CAMPBELL RIVER -- Matt Hamilton acknowledged his golfing pals at his home course might be a tad surprised when they see his name at the top of the B.C. Amateur Championship leaderboard.

“I think people might be a little shocked to be honest,” Hamilton said with a laugh after carding a seven-under 65 at Storey Creek Golf Club. “I think my group was a little shocked as well.”

The 29-year-old Hamilton, who plays out of Crown Isle in Courtenay, rode a hot putter as he recorded nine birdies on the day.

“I don’t know if there was a point in the round where I was saying holy crap I am going pretty low, but there were definitely a few tennis ‘sorries’ to the guys because I wasn’t doing anything great. The ball was just going into the hole for some reason. I don’t know why. I guess it was my day.”

The question is, does he have three more days of solid golf in him? Once upon a time, Hamilton played lots of tournament golf. But his last serious tournament was the 2016 B.C. Amateur down the Island at Pheasant Glen. “I haven’t really been playing a ton,” he said. “I play at Crown Isle on Thursdays and Saturdays with my friends, that’s about it.”

Hamilton, who runs a property management business, had to play his way into the tournament this week via Sunday’s supplemental qualifier. He shot a 74. He’s not sure how he will handle playing with the lead. “I’ll just try not to think about it. We’ll see what happens tomorrow. There are still 54 holes left, providing I don’t shoot 90 tomorrow and miss the cut.”

Hamilton has a two-shot lead on defending champion Tristan Mandur of Duncan and Patrick Weeks of Vancouver. Mandur left no doubt following his round that he’s excited about the prospect of successfully defending his title. “The B.C. Amateur is a massive tournament,” he said. “It’s very exciting to come back and play it again. And you always come to a tournament to win it, so absolutely I’d love to repeat.”

Abbotsford’s James Lepp was the last player to successfully defend a B.C. Amateur title. Lepp actually did it three times when he won four straight B.C. Amateurs from 2002 through 2005. Mandur is heading into his fifth and final year at the University of Utah. He concluded a successful collegiate season in late May by qualifying to play as an individual in the NCAA Championships.

He hasn’t played much tournament golf since then, but is starting a busy stretch. He will be a member of B.C.’s three-man team at next week’s Pacific Coast Amateur at Chambers Bay near Tacoma, Wash. After a sluggish start Tuesday, Mandur birdied seven of his final 13 holes to post his 67. “I got off to a little bit of a slow start,” he said. “I was one-over through four and then started to play solid and make some birdies and I just kept it going.”

Storey Creek was set up relatively short, at about 6,360 yards, on Tuesday. But nearly every hole is tree-lined so there is a premium on accuracy. Driver was not the club of choice off the tee for many players. There were lots of 3-woods, hybrids and 2-irons being struck. “Course management and keeping it in play is key here,” Weeks said.

“It is a perfect course for guy like me with a 105 (mph) swing speed. I can compete without having to hit a lot of drivers. I only hit two drivers today. I just hit a lot of 2-irons off the tee. I built a driving iron before I came out here. I am just trying to keep it low below the trees and letting it roll.”

Like Mandur, Weeks had seven birdies in his round. “I am really happy with the way I putted today,” Weeks said. “I bought a putter at Golf Town in Victoria on the way here and they didn’t have any 35-inch putters so I took a 34. It seemed to work.”

A 42-year-old realtor who plays out of Shaughnessy Golf & Country Club, Weeks said his game has been showing signs of life. He fired a 65 on his home course recently. “Don’t tell any of my clients that I am playing,” he said with a chuckle. “I am trying to keep it a secret. I thought I would bury myself somewhere near the bottom third of the leaderboard.”

A.J. Ewart of Coquitlam, John Robertson of Courtenay, Joshua Zhang of Vancouver, Curtis McCormac of Victoria and Nasheel Kassam of Vancouver all shot four-under 68s and are tied for fifth place.

The 50-year-old Robertson is a former pro who said he is trying to get his game ready for senior golf. “I am kind of biding my time until I can play senior amateur events like the B.C. Senior, the Canadian Senior, the U.S. Senior,” Robertson said. “This course is pretty easy if you don’t hit it crooked. If you keep it in play you are hitting a lot of wedges.

CHIP SHOTS: Prior to the start of Tuesday’s first round, a brief ceremony was held on the first tee to honour Steve Berry, the 1981 B.C. Amateur champion who died recently. . .The 154-player field will be cut to the low 70 and ties following Wednesday’s second round.