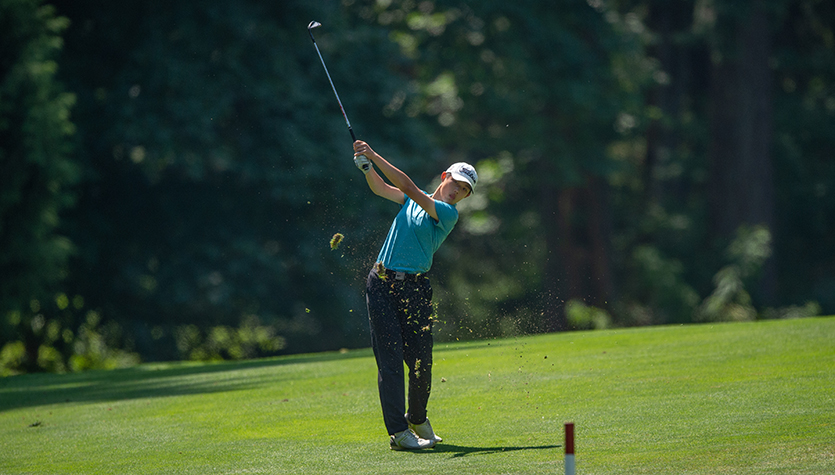 August was already shaping up to be a special month for Victoria Liu. Now it’s even better. The 18-year-old left-hander from Vancouver earned medalist honours at a U.S. Women’s Amateur Championship qualifier Tuesday at Seymour Golf & Country Club in North Vancouver.

She’ll be in the field at Westchester Country Club in Rye, N.Y., where many of the world’s top amateur players will gather for the 121st playing of the championship Aug. 2-8. Liu, who plays out of Shaughnessy Golf & Country Club, is off to Princeton University later in August to begin her studies and play collegiate golf at the Ivy League school.

“I am very excited about Princeton,” she said. “I don’t think the U.S. Amateur course is too far from Princeton. I might play in the tournament and go straight to Princeton.”

Liu shot a one-under par 72 Tuesday to top the field of 25 women who played in the qualifier, where two spots into the U.S. Women’s Amateur were up for grabs. Vanessa Zhang, a 14-year-old from Vancouver, claimed the second spot with an even-par 73.

Liu played in the U.S. Junior Girls two years ago at Poppy Hills in Pebble Beach, Calif. She hopes that experience will help her next month. “I made the cut after two days and then lost my first match in match play,” she said. “That was a great experience and to now play in the U.S. Amateur is great. This will be the biggest tournament I have played in.”

Liu had three birdies and two bogeys in her round at Seymour. “All my birdies came on par 5s,” she said. “I made a lot of up and downs and saved a lot of pars. I probably had five or six of those today. Those shots add up.”
Liu was coming off a third-place finish at the recent B.C. Women’s Amateur Championship in Summerland. She has no tournaments scheduled between now and the U.S. Women’s Amateur and plans to do lots of practising.

“The greatest amateur players from all around the world play in that tournament, so I have to work on all parts of my game,” she said. “Every single part. Also, their grass on the greens and fairways may be quite different from what I am used to in Vancouver, so I think it will be a challenge to adapt to that as well.”

Zhang, who plays out of Marine Drive Golf Club, rebounded from a double-bogey on Seymour’s par 4 second hole to shoot her even-par round. “I didn’t think I was going to qualify, so after making a double there I just decided to play and have fun the rest of the day,” said Zhang, who is heading into Grade 10 at Crofton House School. She did just that by birdieing five of her final 16 holes.

Vancouver’s Tiffany Kong, Liu’s soon to be Princeton teammate, finished alone in third at one-over and is first alternate. She will only draw into the event if either Liu or Zhang withdraw.

CHIP SHOTS: Two other British Columbians have also qualified to the play in the U.S. Women’s Amateur. Vancouver’s Michelle Liu won a recent qualifier in Westminster, Colo., where Surrey’s Lauren Kim earned a spot in the field. Both are members of Canada’s national junior team.