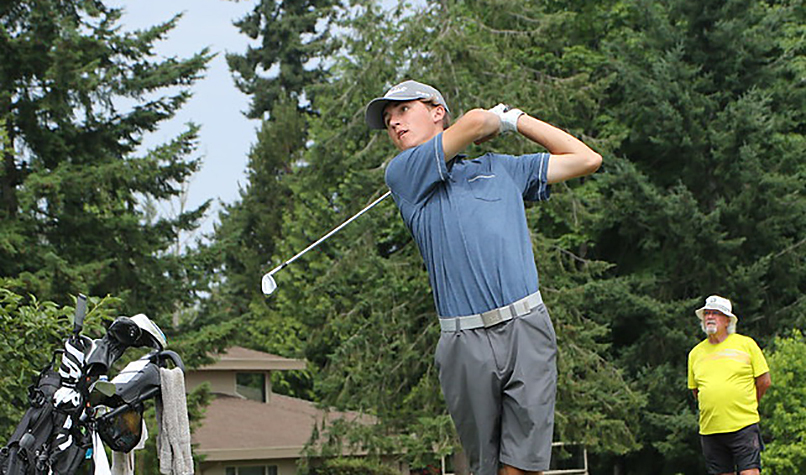 PARKSVILLE -- In the hundreds of rounds that Gavyn Knight has played over the years at Morningstar Golf Club, he has learned where to hit the ball and, perhaps more importantly, where not to hit it. He used all that local knowledge to his advantage and won the biggest tournament of his life Friday, the B.C. Junior Boys Championship.

“I had no big numbers,” Knight said. “I kept myself in the tournament the whole week.” Avoiding those big numbers really was the difference. There’s lots of trouble to get into at Morningstar and Knight did a better job than the rest of the field in avoiding those mini-disasters. He had nothing worse than a bogey in his final round of one-under 71 that left him one-under for the tournament.

He beat Vernon’s Cooper Humphreys by five shots. It was quite a comfortable final round for Knight, who not only plays at Morningstar but works at the course part-time during the summer. “My next shift is Sunday,” he said, so he has a full day to celebrate.

Lots of Morningstar members walked with the final group and cheered on Knight, who is entering Grade 12 at Brentwood College in Mill Bay. Knight is hoping to play collegiate golf and knows his B.C. Junior win will likely generate some considerable interest in his services. “It is definitely good for the resume,” Knight said. “That’s all I can say for sure.”

He has put some feelers out to various schools and said he was told, basically, “have a good summer and keep us posted. So this should definitely help.”

While Knight had a great day, Humphreys had some terrible luck. Starting the day just one shot out of the lead, Humphreys’ putter broke on him early in his round. “What happened was the epoxy got loose so the putter could twist right out of the shaft,” Humphreys said. “I noticed it on hole 2. I hit a putt, thought it was a good putt, but the head shifted just a little open. Exact same thing on the next hole. On the fourth hole I could twist the head right off the shaft.”

Humphreys was told by a rules official -- incorrectly it turns out -- that he could not replace the putter. But he could have it repaired. So he putted with his 3-wood and then his wedge for several holes, while someone on site put his putter back together. “We looked at the rules after and I think we should have been allowed to replace, but it is what it is,” Humphreys said. “What happened happened.”

Humphreys made a couple of late birdies to shoot a three-over 75 and finish the tournament at four-over par. Knight said he felt awful for Humphreys. “I feel pretty bad,” he said. “I’d rather have a win where he was going on all cylinders instead of putting with a wedge.”

Knight did not show a great deal of emotion after his win. The same could not be said for his dad, Greg, who followed his son every step of the way during the tournament. “I know how much this means to him,” Greg Knight said, fighting back tears. “I think his course management was key. He stuck to his game plan, didn’t get distracted. He hit a couple of bad shots, but let it go. The putter saved him on the back nine. He hadn’t really putted that well all week, but when he really needed it today it came through.”

Austin Armanini of Vernon shot the only round in the 60s all week on the boys side of the draw -- a three-under 69 -- to finish tied for third at eight-over par with Charlie Derrheim of Delta and Ryan Liang of Vancouver.

Armanini won a playoff over Liang and Derrheim to clinch the final spot on the three-man team that would normally represent B.C. at the Canadian Junior Boys Championship later this summer. However, inter-provincial team competitions will not be contested this summer due to COVID-19 restrictions.

CHIP SHOTS: A 72-hole better-ball competition was also held this week. The team of Niklas Jaakkola and Hudson LaFayette, both of North Vancouver, won on a count-back with a score of 15-under par. The Delta team of Charlie Derrheim and Adrian Murray and the Vancouver squad of Ryan Liang and Freddy Sun tied for second. . .Next year’s B.C. Junior Boys & Girls Championships will be played at Nk’Mip Canyon Desert Golf Course in Oliver.