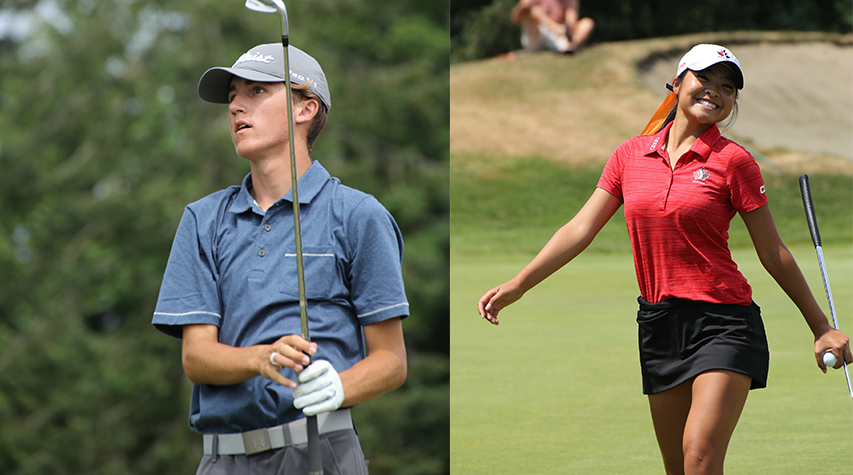 PARKSVILLE -- Gavyn Knight swung his first golf club on the driving range at Morningstar Golf Club when he was three or four years old.

He’s worked at the course the past couple of summers, washing power carts, picking the range and doing pretty much anything else that needs to be done. He’s also logged innumerable rounds of golf at Morningstar.

“Uncountable” he says with a smile. “A lot. High hundreds.” He’ll play another one today as the leader heading into the final round of the B.C. Junior Boys Championship.

The 17-year-old Knight, a Parksville resident, shot a one-under 71 in Thursday’s third round and sits at even-par through 54 holes. Cooper Humphreys of Vernon is one shot back after also firing a one-under 71. “I’m pretty satisfied with my round,” Knight said. “I lost a couple of shots on the green, but my ball-striking was pretty good.”

Knight was followed by a good-sized contingent of family, friends and Morningstar members on Thursday. They will undoubtedly be joined by a few others for Friday’s final round. He appreciates the support and says he’ll try not to let that add to the pressure he’ll face playing with the final-round lead.

The B.C. Junior Girls Championship is also being contested at Morningstar. West Vancouver’s Jennifer Gu will take a two-shot lead into Friday’s final round. Morningstar continues to play tough. It has yet to yield a round in the 60s this week by either the boys or girls. “It’s playing pretty tough, really dry,” Knight said. “It’s tough to stop the ball on the greens.”

There’s also lots of trouble to get into and when the course is this firm and fast, shots hit even slightly off line can roll into penalty areas. Knight, who is heading into Grade 12 at Brentwood College in Mill Bay, avoided taking any penalty strokes Thursday. The same could not be said for Humphreys. The 15-year-old had quite the round, shooting a one-under 71 despite putting three balls out of bounds.

“I have lots of experience doing this,” Humphreys said with a laugh. He made up for those errant shots by recording five birdies. “I haven’t had a good round yet,” Humphreys said. “I am going to try and go pretty low tomorrow.”

Vernon’s Ryan Vest is alone in third place at three-over par after shooting a 74 Thursday.

Gu, an 18-year-old member of Canada’s national junior team, will be attempting to register a wire-to-wire win. She’s had the lead since opening the tournament with a two-under 70. Her lead has shrunk, however. She began the day with a five-shot lead and now only enjoys a two-shot cushion over Coquitlam’s June Hsiao.

Gu shot a four-over 76 Thursday to sit at four-over par for the tournament, while Hsiao fired a one-over 73. “I got off to kind of a slow start on my front nine,” Gu said. “Every putt looked so good until the end. I had nothing going for me really. But I grinded it out.”

Her only birdie of the day came on the par 3 17th hole, where she rolled in a seven-foot putt. “That birdie on 17 really shifted my momentum. I wanted to finish strong and knew I could. I had another good look on 18 and it lipped out like nearly every putt I had today.”

The 14-year-old Hsiao, who is heading into Grade 9 at Centennial Secondary, also finished strong. “I am pretty happy with the round,” she said. “I had a pretty rough start but I saved myself on the back nine.”

Hsiao rebounded with a 33 on the back nine after needing 40 shots to play the front side. “I will try and keep it simple tomorrow,” she said. “Fairways, greens, don’t become overwhelmed if you don’t do well.”

Vancouver’s Vanessa Zhang is alone in third place at nine-over par after carding a 73 on Thursday.