PARKSVILLE -- Jennifer Gu bounced back nicely from some double trouble early on her back nine and grabbed the first-round lead at the B.C. Junior Girls Championship with a two-under par 70 at Morningstar Golf Club.

The 18-year-old from West Vancouver didn’t let that bother her as she quickly birdied the next two holes to get her round back on track.

Gu’s birdie on the par 3 14th hole came when she holed a shot out of a greenside bunker. “I cancelled out my double after two holes because I went birdie-birdie, so I was pumped,” she said. “I was walking fast because I was like, get me in the clubhouse. Some of these holes you just want to take par and run, so the fact I could birdie a couple of them was fun.”

Gu birdied more than a couple of them. She had five birdies on the day and felt she could have easily had one or two more. “I am very happy with where my game is,” said Gu, a member of Golf Canada’s national junior team. “I was not so stoked about my round. I left a lot out there. I hit the ball amazing. I missed a couple of tee shots. I made one bogey and one double and both of them were after bad tee balls, which is kind of what gets you on this course.”

Forty-four girls and 110 boys are competing this week at Morningstar as the B.C. Junior Girls and Boys Championships are being played concurrently. Gu, who is heading to Kent State University in Ohio this fall, has a two-shot lead on Martina Yu of Coquitlam. Yu, a 15-year-old who is heading into Grade 10 at Pinetree Secondary, had one bogey and one birdie in her even-par round. All the rest were pars.

Her bogey came on the first hole, when she three-putted. She birdied the par 3 fourth hole when she knocked an eight-iron to within five feet. “I got it up and down for par five times today,” Yu said. She added that her solid round surprised her as she was not hitting well the ball on the range. “Today I was hitting my drives at the range and they were going everywhere,” Yu said. “I hit my driver left on the first hole, so I just went with 3-wood from there and it worked well.”

Vancouver’s Vanessa Zhang is alone in third after a one-over 73 on Tuesday. 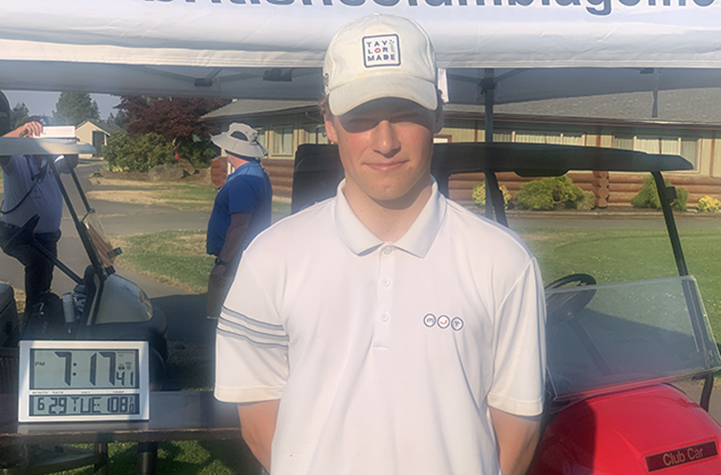 Delta's Luke Spencer Leads The BC Junior Boys After Round One

On the boys’ side, Delta’s Luke Spencer fired a two-under 70 late in the day to take a three-shot lead. Spencer, a 17-year-old who plays out of Beach Grove Golf Club, had five birdies and two bogeys in his round. “I was hitting a lot of greens, putting myself in good position,” Spencer said. “I made a lot of putts from inside 10 feet. I wasn’t making big mistakes.”

Willy Bishop of Victoria is attempting to defend the Junior Boys title he won last summer at Okanagan Golf Club’s Bear Course in Kelowna. He opened with a one-over 73 despite taking an early triple-bogey on the par 5 third hole. “Putting was the thing that saved me today,’ Bishop said. “I was rolling everything in and making some clutch pars on the back nine to keep it somewhat clean.”

Bishop’s triple came when he hit a 4-iron out of bounds. “I just hit an uncommitted 4-iron and it went OB. . .I just didn’t commit to many of the shots on that hole and ended up with a big number. I will be cautious about that tomorrow and try not to go big again.”

Bishop, a 17-year-old member of the national junior team, feels like Morningstar can yield some low scores. “It is positional golf out here,” he said. “If you can keep it in play and not lose a ball for a whole round you are going to be scoring out here.” Bishop shares second place with Cooper Humphreys of Kelowna, Junsu Im of Langley, Lucas O’Dell of Pitt Meadows, Charlie Derrheim of Delta and Tyson Dyck of Abbotsford.

CHIP SHOTS: The course was set up at about 6,850 yards Tuesday for the boys and about 5,950 for the girls. The field will be cut in half after Wednesday’s second round.