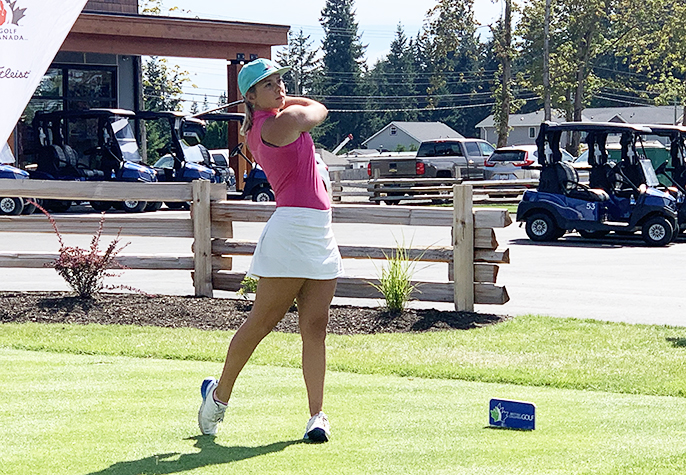 SUMMERLAND -- The wind can really howl at times in Reno, where Leah John plays her collegiate golf at the University of Nevada.

So when it began to blow hard in Thursday’s third round of the B.C. Women’s Amateur Championship at Summerland Golf Club, John didn’t get flustered. Far from it. The 21-year-old Vancouver native flourished in a stiff wind that blew especially hard on the back nine.

John matched the low round of the tournament with a three-under par 71 and will take a two-shot lead over Jennifer Gu of West Vancouver into Friday’s final round of the 116th playing of the championship.

“Reno is really windy all the time so we get to play in this stuff a lot,” John said after her round. “One of the things my coach says is conservative targets and aggressive swings. So that has always been something I take with me when I am playing in the wind. You have got to hit it into the wind, you can’t let the wind take it for you. I like the wind. It is fun, you can play with it.”

John’s round included five birdies and an eagle. That eagle came on the 17th hole when she rolled in a 35-foot putt she really wasn’t expecting to make. “It was one of those where you are going, 'just get it close,'” she said. “I didn’t think it was going in. It was hanging there for about three seconds and it dropped.”

In addition to the wind, the players had to play the course a new way Thursday as the nines have been swapped for the final two rounds. That means they are starting play on the regular back nine at Summerland, which is the more difficult side. “It definitely was trickier, for sure,” John said of starting the round on the back nine. “You had to be more on point and sharp coming out of the gate.”

Now she must sleep on the lead. John, a member at Marine Drive Golf Club, said she will try and treat Friday’s final round as just another round of golf. “I am just going to try and handle it the way I did today. Have fun, do my best. I really just want to learn from these experiences as much as I can. I am going to focus on the process. I won’t focus on my score at all. Target, club, hit, move on.” 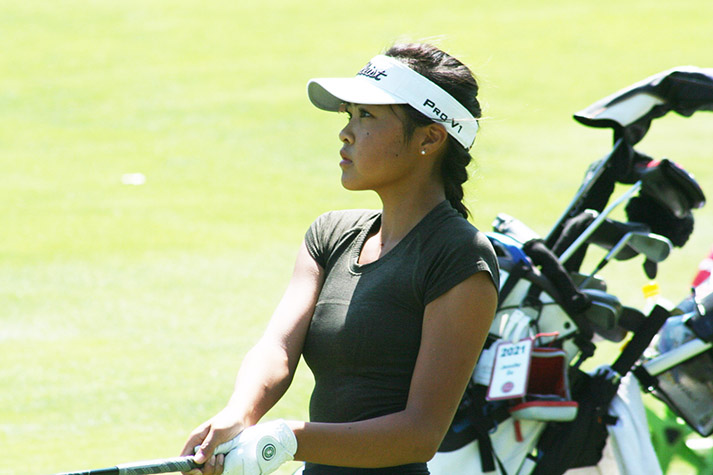 After two solid rounds, Gu had entered Thursday with a three-shot lead. It evaporated rather quickly as she struggled on the front side with two double-bogeys. She played much better on the back side, finishing her round with a birdie after just missing an eagle putt from inside 10 feet. “The first two days my game plan was go as deep as I can on the front nine and just hold on on the back nine,” Gu said. “So it was kind of switched around today.”

Her three-over 77 left Gu at one-under for the tournament and two shots behind John. “The wind made the course play very different,” said Gu, a member of Canada’s national junior team who plays out of Seymour Golf & Country Club in North Vancouver. “I played very well the first two days and struggled today. But there’s four rounds of golf so...”

Vancouver’s Victoria Liu is alone in third at even-par after a solid one-under 73 Thursday. Liu, an 18-year-old who plays out of Shaughnessy Golf & Country Club, got hot in the middle of her round when she made four birdies in a five-hole stretch. “It was so windy today on the back nine,” Liu said. “You had to take yardages on and off and it was important to choose the right clubs. I was just trying to hit good shots to make a par and if I hit a good putt I will get a birdie.”

Liu just graduated from Lord Byng Secondary and is off to Princeton University this fall, where she will join Tiffany Kong, another Vancouver resident on the Ivy League school’s golf team. Martina Yu of Coquitlam and Yeji Kwon of Port Coquitlam are tied for fourth place at three-over par.

CHIP SHOTS: A two-woman better-ball competition is also being contested this week. The team of Katherine Hao of Burnaby and Martina Yu of Coquitlam lead at 13-under par, one shot better than Rebecca Reitsma of Kelowna and Jennifer Gu of West Vancouver and the Vancouver duo of Victoria Liu and Vanessa Zhang.