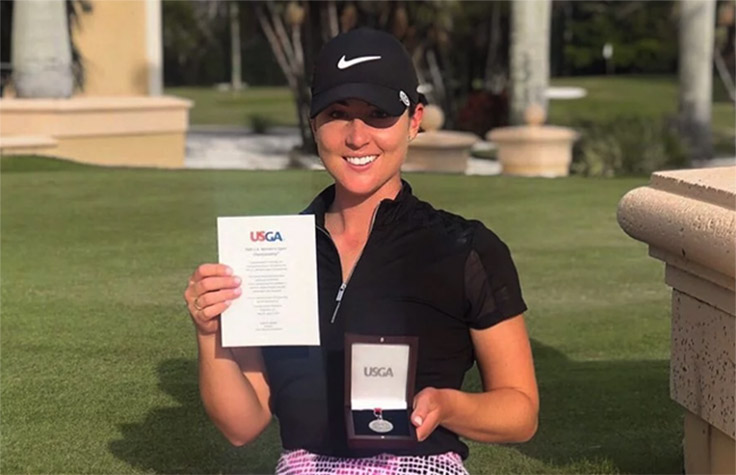 The road has at times been quite bumpy with plenty of twists and turns, but Kelowna’s Megan Osland is beginning to see some progress in her professional golf journey.

The latest good news came last week when Osland successfully qualified to play in next month’s U.S Women’s Open at the Olympic Club in San Francisco.

That should not come as a complete surprise as Osland’s game had been showing considerable signs of life since she headed south about a month ago to begin her competitive season.

Two weeks ago, Osland won a National Women’s Golf Association event in Orlando, Fla., beating a field that included multiple LPGA Tour winner Paula Creamer, and she has played well this spring on the All Pro Women’s Tour.

“I am feeling good, I feel a whole lot different than other years,” Osland said over the phone from Arkansas, where she tied for 19th at an All Pro Women’s Tour event.

“I came into this year with a fresh mindset, especially after not being able to compete for over a year because of COVID. I just came into it with a renewed mindset and just grateful to be playing. I feel good about my game. I worked really hard on pretty much every aspect of my game all of last year and so everything is feeling pretty good.”

Osland, now 27, graduated from San Jose State University, where she won twice, in late 2015. She played on the Symetra Tour from 2016 through 2019 and missed more cuts than she made. She acknowledges having to fight through some difficult times as she struggled to find her game.

“It’s definitely been a roller-coaster,” Osland says. “I have learned so much. It’s such a big transition from college to professional, especially when you are on the Symetra Tour and you are in a different city every week. Nothing is done for you. You are your own manager, your own everything.

I didn’t have a caddie the first four years so I was just out there by myself. At some points it was really tough after missing a number of cuts in a row and you are on the road and you are just trying to grind it out. Parts of it were really hard, but I think I needed those years to kind of mature as a player.”

Osland says her career got a boost when she secured a sponsor to help pay some of her bills on the road. It happened by chance at the Canadian Women’s Open in 2019. Osland met the president of Bothwell-Accurate, a Mississauga-based construction company, in the pro-am. She obviously made a nice impression and inked a sponsorship deal with the company.

“They are incredibly supportive and it is such a relief to play without that worry of having to make a putt to make your money or whatever,” she says.

Osland will spend the next month trying to sharpen her game for the U.S. Women’s Open, which goes June 3-6. Osland hopes her first U.S. Open experience, at the 2019 championship in Charleston, S.C., will help her during this year’s tournament. She missed the cut by two shots that year, but played well.

“I think just having the experience playing at that level will help,” she says. “I have played some LPGA events, but the U.S. Open is just a whole other thing. I think just being there once and knowing I can compete gives me some confidence going into the event.”

Osland got into the U.S. Open by firing two rounds of one-under 71 to claim one of two spots available at a qualifier in Ormond Beach, Fla. She made 11 birdies in that 36-hole qualifier.

SEASON STARTS: Whistler Golf Club and Nicklaus North are both scheduled to open for play later this week. Nicklaus North opens for play on May 6 (Thursday), while Whistler Golf Club begins its season on May 7 (Friday). Chateau Whistler plans to open on May 13. “The golf course wintered incredibly well and guests will see mid-season conditions right from opening,” says longtime Whistler GC general manager Alan Kristmanson.

“We are asking everyone to stay local from May 7 until May 25, but do encourage everyone to book online now for anytime this summer as we expect a very busy season.
“Our signature hole, the par 5 16th, has a new tee complex complete with a viewing area for the tourists to clap for you. . .assuming you hit a good drive, of course. It should be open June 7.”

PERSONAL BEST: Vancouver’s Stuart Macdonald posted his best-ever finish on the Korn Ferry Tour with a tie for 16th at the Huntsville Championship in Alabama. Macdonald closed with a five-under 65 to finish the event at seven-under par. That was eight shots behind winner Paul Barjon of France. Macdonald, who moved up six places to 116th on the Korn Ferry Tour points list, birdied his final hole Friday to make the cut on the number at one-under par.

But that was nothing compared to the rally Surrey’s Adam Svensson staged to also make the cut on the number. After opening with a six-over 76 and making the turn on Friday at five-over for the tournament, Svensson looked like he had no chance of making the cut.

That all changed when Svensson shot 29 on his back nine, including an eagle-birdie finish. Svensson shot weekend rounds of 69 and 77 to finish tied for 65th at five-over par. Svensson dropped two spots to 15th on the Korn Ferry points list. Macdonald and Svensson are both in the field for this week’s Simmons Bank Open for the Snedeker Foundation in College Grove, Tenn.

WEEKEND OFF: The British Columbia boys were blanked at the PGA TOUR’s Valspar Championship in Palm Harbor, Fla. Merritt’s Roger Sloan and the Abbotsford duo of Nick Taylor and Adam Hadwin all missed the cut. Hadwin earned his lone PGA TOUR win at the Valspar in 2017. All three players are in the field for this week’s Wells Fargo Championship at Quail Hollow Club in Charlotte, N.C.

PAC MAN: University of Washington senior Henry Lee of Coquitlam tied for 28th at the Pac 12 Championships in Santa Rosa, Calif. Lee finished the 72-hole event at one-under par and had a team-leading 20 birdies during the event. The Huskies finished in fourth place behind Arizona, Arizona State and Stanford and hope to earn a wildcard into the upcoming NCAA Regionals.

SENIOR MOMENT: And finally, a hearty congratulations to Mike Weir, who won his first PGA Tour Champions event at the Insperity Invitational near Houston. It came nearly 22 years after Weir’s first PGA TOUR win, which of course occurred at the 1999 Air Canada Championship at Northview Golf & Country Club in Surrey.