Golf In 2020: Looking Back On A Year You’ll Never Forget 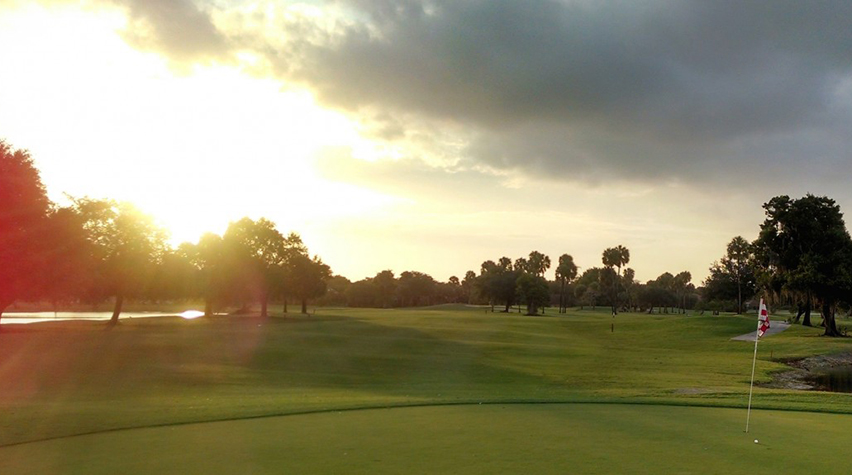 The COVID-19 pandemic has infected millions and killed hundreds of thousands around the world. Almost without exception, everyone was affected in some way.

Its effects extended beyond the physical toll, causing emotional, psychological and economic impact. We were hard-pressed to find ways to stay positive and active. Many turned to golf as an outlet, even therapy of sorts.

“What an incredibly strange and challenging year,” Golf Canada CEO Laurence Applebaum said in an interview with The Canadian Press. “Golf has been a silver lining, a bright light, call it what you may, in giving people a bit of a break from the pandemic.”

Record rounds were registered across the country consistently throughout the year, played under strict precautionary COVID-19 protocols. 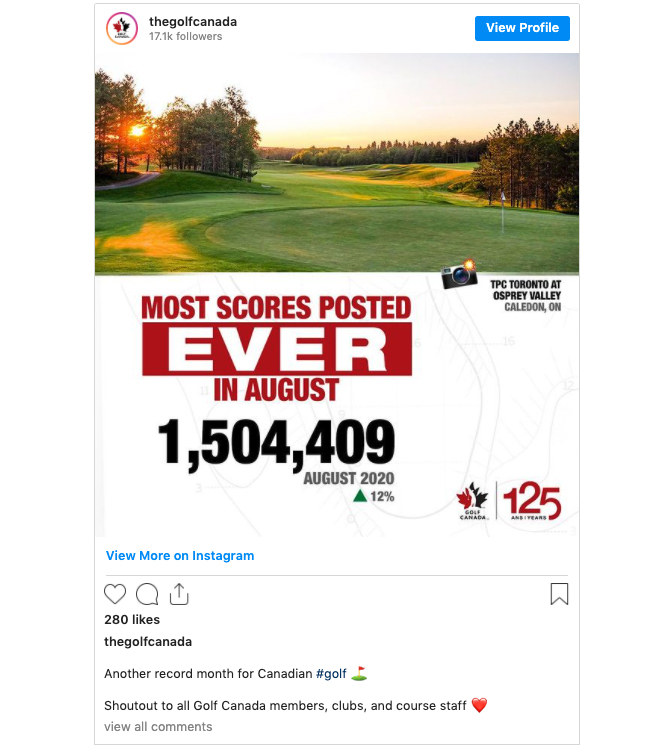 While participation grew across the country, most tournaments and social gatherings at golf clubs were cancelled or postponed, including the RBC Canadian Open and the CP Women’s Open. The Mackenzie Tour-PGA TOUR Canada cancelled its season. All Golf Canada’s national championships and many provincial association tournaments were shelved.

“We’re going to look back on 2020 and say, ‘amongst all the challenges, amongst a lot of really difficult situations for so many people, golf was a bright light that we built from,’” Applebaum said.

For example, the COVID-19 Golf Relief Fund initiated by Golf Canada and the Canadian Golf Foundation raised more than $400,000. The fund subsidizes non-medical personal protective equipment for golf course employees as well as sanitization, hygiene and protective material expenses. It also subsidizes rounds of golf for front-line workers as well as juniors.

What follows are some of the top golf-related stories from 2020, a very different year. These are just some of the headlines. Details on these stories and many others are available under News on the Golf Canada website.

JANUARY
The new World Handicap System came into effect with the goal of making the game more enjoyable by providing a consistent means of measuring performance and progress and to enable golfers of differing abilities to compete or play a casual round with anyone else on a fair and equal basis. 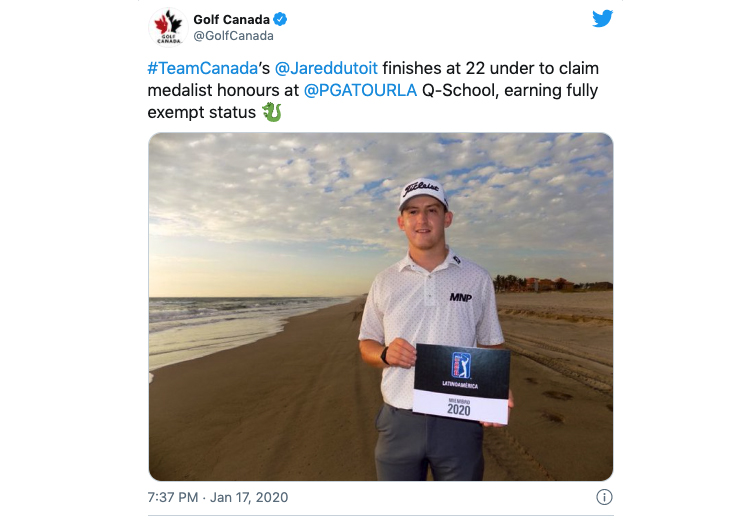 Grace McCann of Windsor, Ont., a past president of the former Canadian Ladies’ Golf Association, passed away at the age of 85.

MARCH
As the first wave of the COVID-19 pandemic enveloped not only Canada but the world, governments ordered the shutdown of non-essential businesses, which in most provinces included golf courses.

The Summer Olympics, scheduled to begin in July in Tokyo, are postponed until 2021 due to the pandemic. They will still be called the Olympic and Paralympic Games Tokyo 2020, however.

MAY
Due to the coronavirus pandemic, most golf courses across Canada did not open on schedule this spring. Although those in British Columbia were never ordered to close, those in other provinces were shuttered until they were allowed to open when stringent anti-COVID safeguards were in place. New Brunswick courses opened April 24 with the balance of the provinces following suit throughout the month of May.

Golf Canada announced the formation of the Golf Industry Advisory Council, a volunteer group of experienced professionals to support Golf Canada’s Board of Directors and management team. The council will include course owners, operators, general managers, superintendents and professionals as well as executives from the golf equipment, apparel and footwear industry.

Canada’s Sports Hall of Fame announced Lorie Kane of Charlottetown was among six athletes and five builders who will receive the Order of Sports award, Canada’s highest sporting honour. 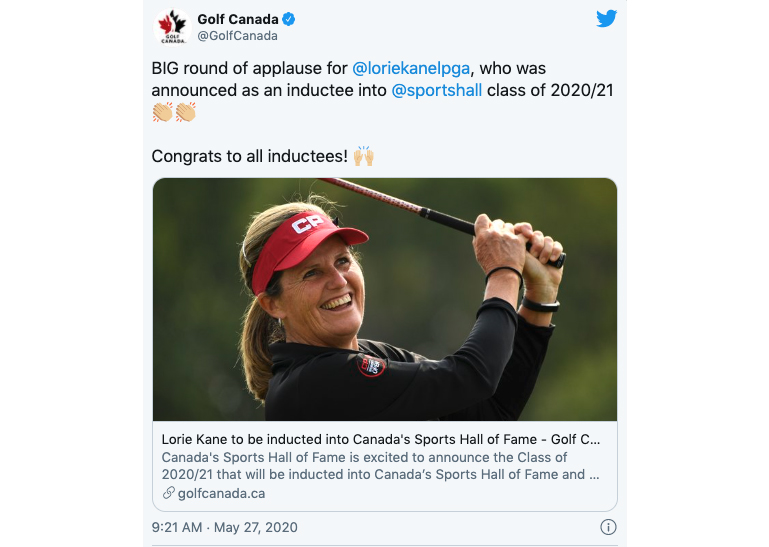 The PGA TOUR announced that it would resume without spectators in June. The Tour had suspended play since The Players Championship was cancelled in March.

JUNE
Despite months of planning, the celebration of the 125th anniversary of the founding of Golf Canada on June 6, 1895, also fell victim to the pandemic. Nevertheless, the historic occasion was commemorated virtually with pivotal moments in Canadian golf being recalled on social media platforms using the hashtag #GolfCanada125.

Golf Canada announces that St. George’s Golf and Country Club will play host to the 2021 RBC Canadian Open. The 2020 championship, scheduled for St. George’s, was cancelled due to the pandemic.

The LPGA Tour announced it would resume July 31 without spectators after having suspended play in February. 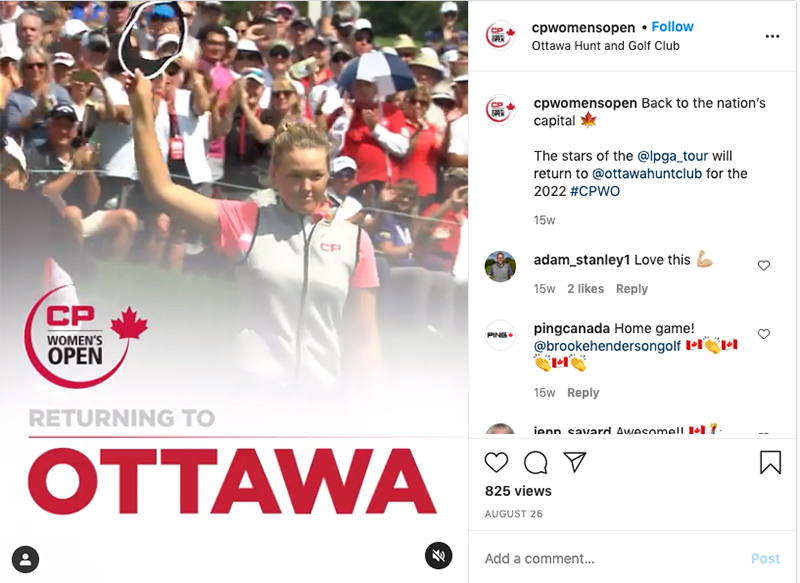 The Golf Canada Women in Coaching Program, a partnership between Golf Canada and the PGA of Canada with the goal of putting the sport on the path to further balance between the sexes at a high level, was announced.

The new and free Golf Canada app was launched, allowing golfers nationwide to record and track their scores, trace where they have played and provide detailed game statistics as a game improvement tool. 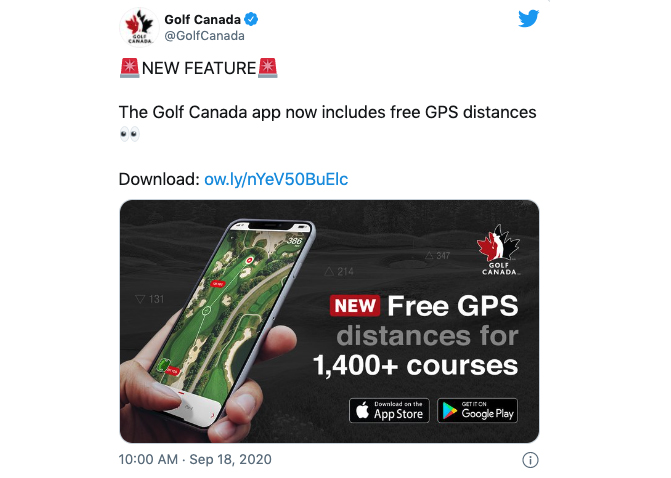 The PGA TOUR announced that the 2024 Presidents Cup will return to The Royal Montreal Golf Club. The event, which pits the top male pros from the U.S. against the best from the rest of the world (except Britain and Europe), was held there in 2007.

Golf Canada and U.S.-based First Tee announced the launch of First Tee-Canada. The partnership will bring First Tee’s youth development emphasis to strengthen Golf Canada’s junior golf activities —previously conducted under the Future Links brand — that reach kids in schools and at golf facilities. The innovative First Tee curriculum will focus on empowering young people to build strength of character through the game of golf. 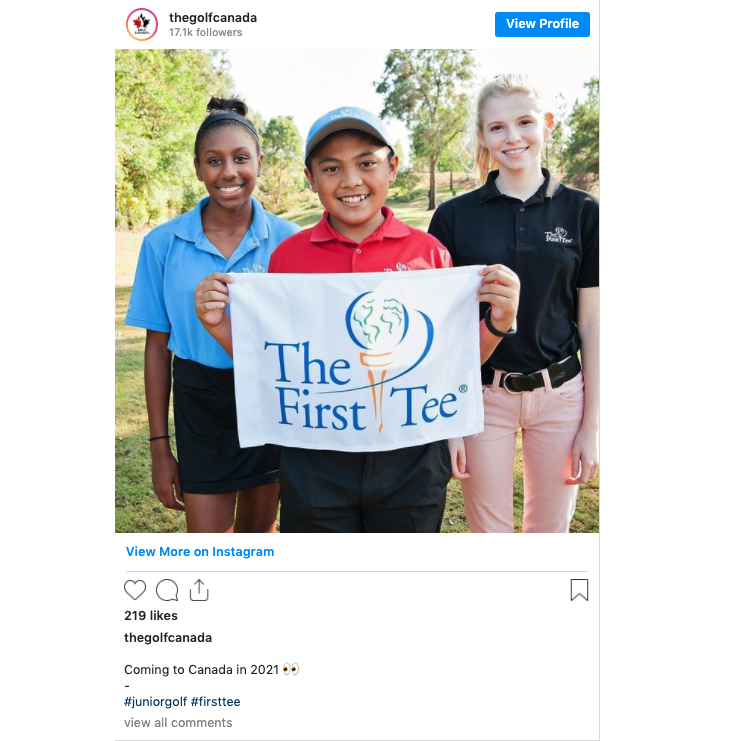 SEPTEMBER
The third annual CP Women’s Leadership Summit, held virtually due to the pandemic, provided inspiring stories and a networking opportunity along with accepting donations for the B.C. Children’s Hospital Foundation. Hosted by TSN anchor Lindsay Hamilton, speakers included golfers Lorie Kane and Brooke Henderson, Olympians Marnie McBean and Perdita Felicien and other prominent women in leadership positions. “It was a success story for us,” said Mary Beth McKenna, assistant RBC Canadian Open tournament director who has co-led the event since it began.

The Golf Journalists Association of Canada announced that Kim Locke of Toronto, founder and president of SCOREGolf, was the 2020 recipient of the Dick Grimm Award. The association’s highest honour is awarded in memory of the late Richard Grimm whose legendary service to the RBC Canadian Open and the Canadian golf industry remains unparalleled.

OCTOBER
PGA TOUR Champions rookie Mike Weir of Bright’s Grove, Ont., had victory in sight leading by three strokes heading into the final round of the Dominion Energy Charity Classic in Virginia but fellow rookie Phil Mickelson denied him the win. It was Weir’s third top-10 finish in eight starts on the tour.

Findlay Young of Prince George, B.C., a former Golf Canada president and honourary life governor, passed away at the age of 92.

NOVEMBER
Twenty-nine athletes, male and female, were named by Golf Canada to represent Team Canada as part of the 2021 national Amateur and Junior Squads. Due to the COVID-19 pandemic, all athletes from the 2020 squad were able to return in 2021, provided they met team eligibility criteria.

Aaron Cockerill of Stone Mountain, Man., finished T4 at the JoBurg Open in South Africa, his best career finish on the European Tour.

The Economic Impact of Golf in Canada (2019) report, conducted on behalf of the national Allied Golf Associations (We Are Golf), was released. Among its findings were that the Canadian golf industry generated $18.2 billion in economic benefits, employs the equivalent of nearly 249,000 people through direct and spin-off effects and contributed to $10.6 billion in household income. 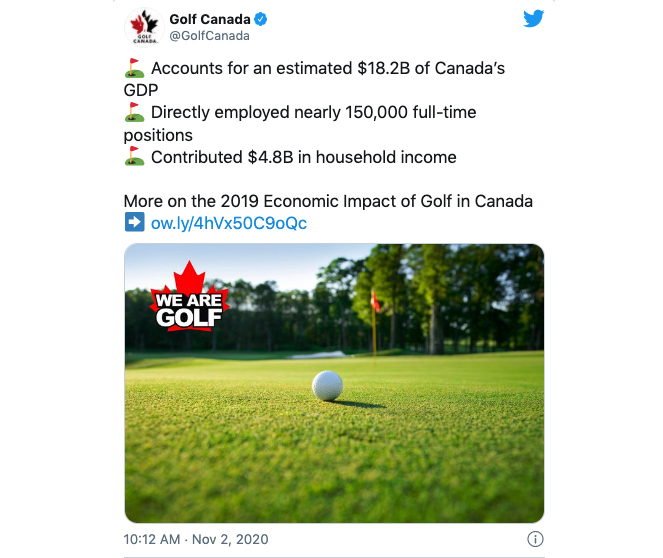 Corey Conners of Listowel, Ont., finished in a tie for 10th at the Masters, which was postponed from its traditional April date due to the pandemic. That finish guaranteed him a spot in the 2021 Masters.

So while what lies ahead for 2021 remains unclear, we can only hope that when we compile next year’s “Year in Review,” life as we know it will have returned to a semblance of normality, on the course and off.