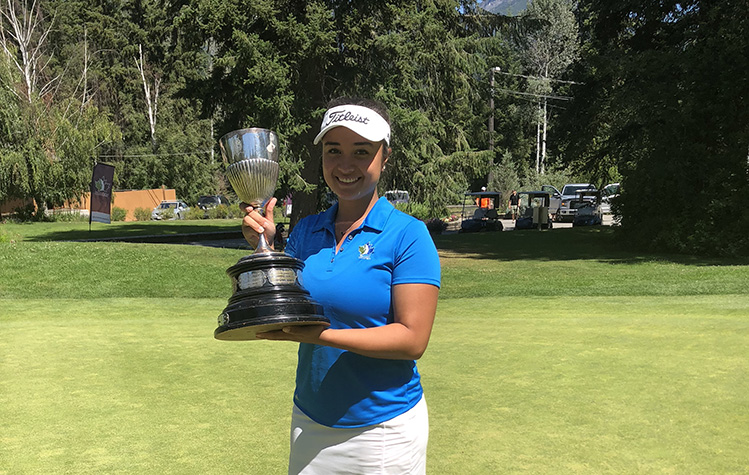 Now That She's Got Her Hands On The Flumerfelt Trophy As The B.C. Women's Amateur Presented By Maui Jim Champion, The19-year-old Delta Resident Will Turn Her Attention To The Canadian Women’s Amateur Later This Month At Marine Drive Golf Club In Vancouver - Image Credit Greg Moody/BC Golf

It wasn’t until Mary Parsons clutched the Flumerfelt Cup as B.C. Women’s Amateur champion that the significance of what she had accomplished really began to sink in.

“I saw a few of the names and I was just thinking like those are some pretty amazing players and to have my name on it with them means a lot,” Parsons said after her convincing win at Golden Golf Club.

Actually, convincing doesn’t begin to describe it. The talented 19-year-old from Delta steamrolled the rest of the field and won by 11 shots. It is the second provincial title for Parsons, who captured the B.C. Junior Girls Championship two years ago at Big Sky Golf Club in Pemberton.

Parsons gave back a couple of shots to the field in Friday’s final round. Of course, she had lots to play with. She began the final round with a 13-shot cushion. Parsons fired a steady one-over 73 to finish the 72-hole event at one-under par. She acknowledged it felt a little weird to be playing the final round with such a big lead.

“I don’t know how to describe it because I knew I had a big enough lead that if something happened I would probably still be fine,” Parsons said. “But I still wanted to put up a good number. Toward the end of the round I started to get a little shaky with my driver and hit a couple of wild tee shots, but I made some birdies at the end.”

Parsons birdied two of her last three holes -- including one on the 18th green -- to win the championship in style. Port Alberni’s Christina Proteau, a three-time B.C. Women’s Amateur champion, finished alone in second place at 10-over par after closing with a solid one-under par 71.

That second-place finish had significance as it allowed Proteau to make the three-woman B.C. Team for the Canadian Women’s Amateur Championship, which goes July 24-27 at Marine Drive Golf Club in Vancouver. Victoria’s Naomi Ko, who was competing in the North & South Amateur tourney in North Carolina, had been awarded an exemption onto the team.

“I knew pretty early in the week that Mary was not going to blow up, nor do you want her to,” Proteau said. “It was different playing in the final group without a chance to win. But we had something else to focus on. It still feels very rewarding. There were a couple of really strong players in Hannah Lee and Kathrine Chan. I knew it wasn’t going to be shoot a 74 and make the team.”

Lee and Chan finished tied for third at 12-over par. Lee, from Surrey, fired a 73 on Friday, while Chan, from Richmond, carded a 72. “I am excited,” Proteau said. “I haven’t played Marine Drive before, but have heard lots of great things about it. I was already exempt into the event, but now I definitely feel like I earned my spot and I am very excited to play.”

Both Proteau and Parsons know the Canadian Amateur will be a tough test. “I am really looking forward to the rest of my summer,” said Parsons. “There’s the Canadian Amateur and I am excited about spending the rest of the summer in Vancouver before heading back to school. I am anxious to get out to Marine Drive, play some practice rounds and try to get a good feel for the course.”

Parsons is heading into her sophomore year at the University of Indiana.

CHIP SHOTS: A two-woman, best-ball competition was held in conjunction with the Women’s Amateur. Lee and Chan won with a 72-hole score of 10-under par. That was three shots better than Parsons and her partner Jaya Rampuri of Coquitlam. . .The 2019 B.C. Women’s Amateur Championship will be held at Nanaimo Golf Club.