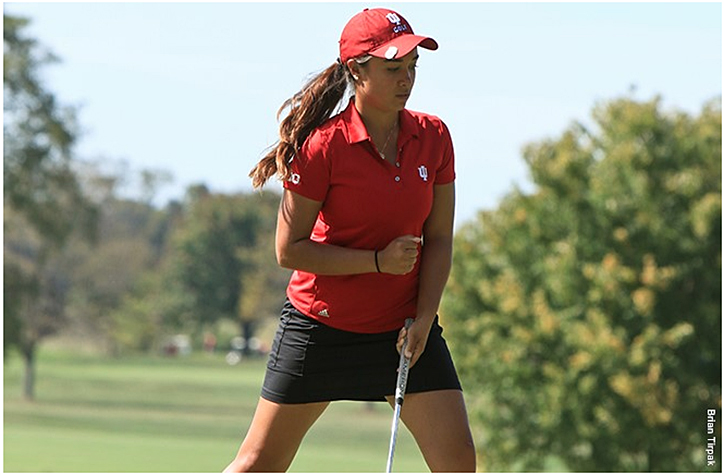 Mary Parsons just finished her freshman year at the University of Indiana and thinks she returned home a better player. The 19-year-old Delta native put her improved game on display in Tuesday’s first round of the B.C. Women’s Amateur Presented By Maui Jim Championship at Golden Golf Club, where she fired a two-under par 70 to open up an early four-shot lead.

“I really enjoyed my time down there,” Parson said of her first year as a Hoosier. “I played in pretty much all the events except for one. I think it has helped me learn to better manage myself on the course. It was a great experience to play events with so many competitive players.

Parsons was generally pleased with her round Tuesday. “I think I played pretty well today,” she said. “I was hitting it pretty good throughout the round. My putting was pretty good, I was getting it close to the hole and it was nice to see some putts drop. I wouldn’t say there was anything off. I played pretty steady most of the day. I was happy with it.”

Parsons came to the tournament as one of the favourites. She won the 2016 B.C. Junior Girls Championship at Big Sky Golf Club in Pemberton and this past year had the lowest stroke average on her Indiana team. “I managed myself well on the course and for the most part stuck to my game plan,” she said. “I didn’t really let shots get away from me.”

Parsons made five birdies and three bogeys in her round. “I had two tap-in birdies on the back nine and then on the front I had two that were about 15 feet and the other birdie was a two-putt on a par 5.” Natalie Chu of Vancouver and Angela Arora of Surrey share second place after shooting two-over 74s on Tuesday. Hannah Lee of Surrey opened with a 75 and sits alone in fourth spot.

Parsons said Golden Golf Club played fairly long and she hit drivers off most tees. “You definitely need a straight ball out here and the greens can be pretty tricky with a lot of subtle breaks,” she said. “And it is playing fairly long off the tee. Besides the par 3s, most were driver holes today for me.”

Parsons only has one more event left on her summer schedule -- the Canadian Women’s Amateur Championship at Marine Drive Golf Club in Vancouver later this month -- before she returns to Indiana for her sophomore season. “I can’t wait to get back there,” she said.