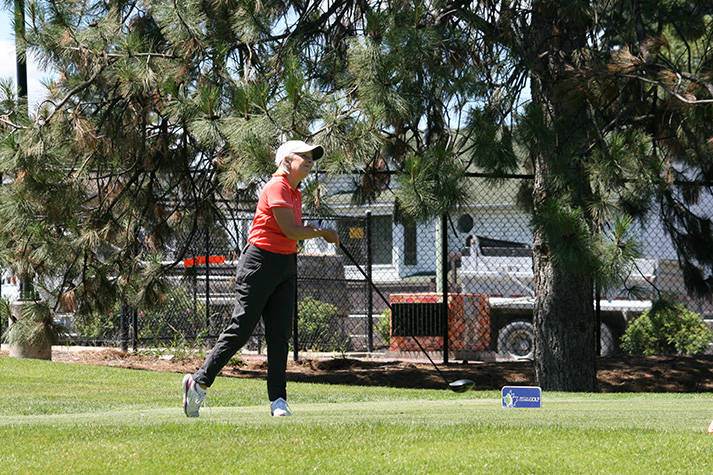 Procter, BC's Jackie Little Is One Round Away From Securing Her 6th B.C. Senior Women's Championship -  British Columbia Golf Image

Jackie Little gave the rest of the field an opening, but no one took advantage in Wednesday’s second round of the B.C. Senior Women’s Championship at Crown Isle Golf Resort in Courtenay.

Little fired a four-over 76 Wednesday. That was five shots higher than the one-under 71 she recorded in Tuesday’s opening round that had given Little a three-shot cushion.

Despite not playing as well on Wednesday, Little’s lead is now five shots heading into Thursday’s final round of the 54-hole event. If Little can close it out, it would be her sixth B.C. Senior Women’s title to go along with a whole lot of other provincial and national titles.

Little’s day started with a double-bogey on Crown Isle’s par 5 first hole. She settled in and made nine straight pars before registering back-to-back bogeys on the 11th and 12th holes. Her lone birdie of the day came on the par 5 15th hole, but she gave that stroke back with a bogey on No. 17. Little stands at three-over par 147 through two rounds.

Kim Evans of Vancouver and Colleen Wheatley of Shawnigan Lake are tied for third at nine-over. Defending champion Karen Pultz of Surrey fired her second straight 79 and is alone in fifth place at 14-over par.

Little, who plays out of Balfour Golf Club and lives in Procter, also leads the Super-Senior category for golfers 60 and over by six shots over Wheatley.

The Zone 1 (Kootenays) Team, comprised of Little and Leslie Weaver from Cranbrook won the 36-hole zone competition with a score of 33-over par. That was one shot better than Zone 3's (Fraser Valley) Pultz and Elaine Blatchford, who also hails from Surrey.