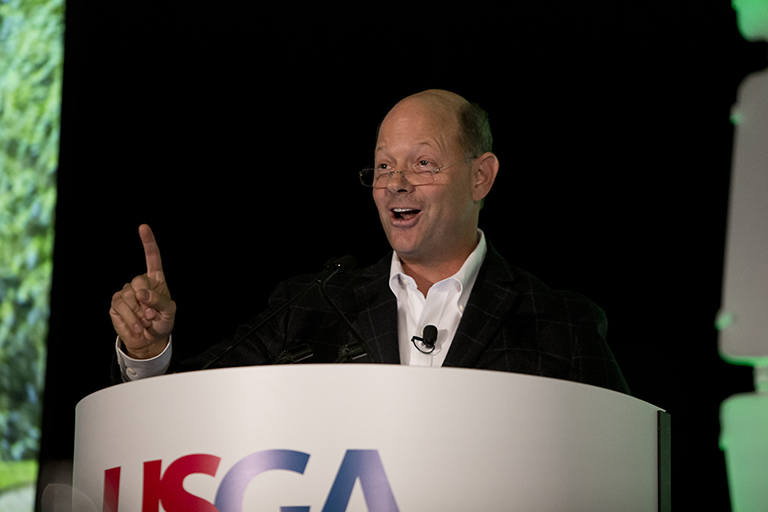 Variable-distance golf balls, courses that are more brown than green, hard and fast fairways, slower greens and balls with chips embedded in them that you will always be able to find.

Those are just some of things Mike Davis, executive director of the United States Golf Association, sees in golf’s future.

Change and innovation may not be words that spring to mind when thinking about the game of golf, but the USGA seems intent on altering that perception.

Just days after co-releasing significant proposed rule changes with the Royal and Ancient Golf Club, the USGA visited Vancouver for a North American Golf Innovation Symposium. The two-day gathering featured panel discussions and presentations on a variety of topics, including the future of course maintenance, golfer experience and the challenges facing the industry.

“But at the same time, we realize if we are stagnant the game is not really going to thrive, it may just survive.”

Davis’s speech succinctly wrapped up two days of lively discussion. He spent much of his address talking about what he saw in golf’s future and it might not be what many would imagine. “It is not just growing the game, it’s about making sure we grow the game into something that is very welcoming and enjoyable,” Davis said.

And sustainable. Davis warned that the modern-day look of golf courses -- with dark green, closely cut fairways and perfectly manicured, speedy putting surfaces -- may have to go the way of persimmon woods as water becomes more of a precious resource.

“What is wrong with a little tinge of brown in the grass?” Davis asked. “What is wrong with a course where the balls bounce? A bouncier golf course, folks, is a far more interesting and strategic golf course and is not just for the elite player. For the average golfer, the beginning golfer, when a golf course is drier and you can get a little bit of extra roll with your driver, you can bounce balls into greens. That makes for a more enjoyable experience.”

As he called for a change in the way we think about the game, Davis noted that some of the changes golf has faced over the past century have not exactly been good for the game. “I have been asked to try and imagine a little bit,” Davis said. “So just think about this. Imagine golfers changing their perceptions where hard doesn’t necessarily equal good.

For the last half-century in North America there has been this mindset that hard equals good. What we really need to do is say that an enjoyable golf experience equals good.  “So this notion that continuing to make the golf courses harder, longer, narrower, (with) higher rough, forced carries, lost balls, etcetera, etcetera, that probably isn’t going to add to that enjoyable experience.”

Davis lamented that golf’s governing bodies have not been able to rein in the distance golf balls now travel. He noted that Shinnecock Hills, the site of the 2018 U.S. Open, played at about 5,500 yards when it played host to the tournament back in 1896. Next year, it is expected to play at 7,500 yards.

“We all have regrets in life and when I think about some of the things that the USGA has done over the years the one that comes to mind is the whole distance issue,” Davis said. “Anybody is hard-pressed to say that as distance has increased the way it has the last 100 years that it has been good for the game.”

He argued that no other sport has had to expand its playing field as much as golf has over the last 50 years. “Have other sports allowed their equipment to influence their playing field the way golf has? I don’t think you can find another sport that has allowed equipment to dictate how playing fields get changed. You think about baseball in the United States. If they were using titanium bats and a hot baseball they’d go to Fenway Park and say move the Green Monster out another 75 or 100 feet.

That is exactly what is happening in the game of golf. Then you say what good has that done. I can’t think of a good reason. I suppose it has helped architects and construction companies but by and large it has cost a lot of money.”

That is when Davis broached the subject of variable-length golf balls. And he seemed dead serious about it. “If I wanted to play with Dustin Johnson I’d say, ‘here’s an 80 per cent golf ball, I am using a 100 per cent golf ball’ and we are going to play the same tees.”

Davis acknowledged it sounds like a radical idea but noted it might bring some golf courses that have had their architectural integrity compromised back into play.

While on the subject of golf balls, Davis suggested he would also like to make them easier to find. “Imagine this, golf balls with an internal chip inside of them so you don’t have to look for them any more. Right now, the rules of golf say you can’t have that. But think about it, how many people do you know who like looking for golf balls? That is an innovation we shouldn’t turn our backs on.” (That groan you hear is from golf ball manufacturers).

The symposium was attended by many of the key players in the British Columbia golf industry. They seemed encouraged by what they heard. “Quite honestly, I see this as being a watershed movement,” said Kris Jonasson, executive director of British Columbia Golf.

Andy Hedley is president of Golf BC, the largest golf operator in the province. Hedley had 22 members of his staff at the seminar.  “This was kind of a once in a lifetime opportunity provided by the USGA right on our doorstep,” Hedley said.