B.C. Senior Men’s Tourney A Mix Of Competition And Camaraderie 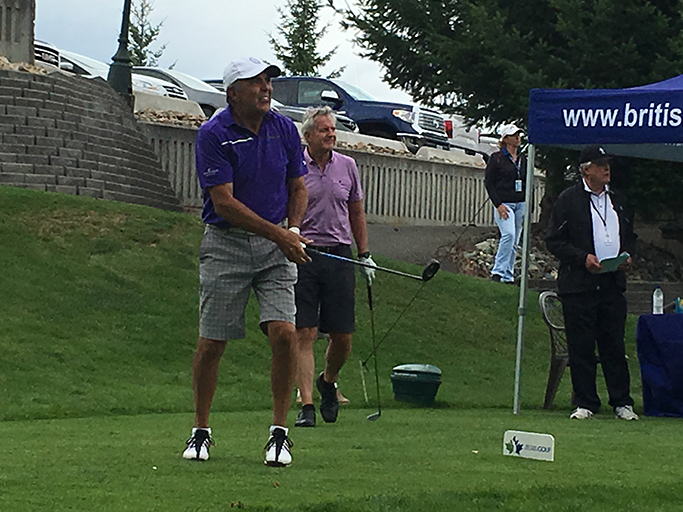 Doug Roxburgh Tied With Three Others For First-Round Lead

BLIND BAY -- It is as much about the camaraderie as the competition. The field for this week’s B.C. Senior and Super-Senior Men’s Championships at Shuswap Lake Estates Golf Course in Blind Bay numbers 144. Most know they have no chance of winning, but that doesn’t matter.

They are here to play with old friends and maybe meet some new ones. Toasts will be made in the bar after their rounds. Stories will be told. They will celebrate their birdies and lament their bogeys or those dreaded others.

Even 13-time B.C. Amateur champion Doug Roxburgh, who has won this event twice in the past three years, acknowledges that the social side of the game is a big part of the appeal of senior golf to him.
“Until I retired, I really didn’t have any opportunity to play senior golf just because I was working through the summer (with Golf Canada),” the 64-year-old Roxburgh said before he teed off in Tuesday’s first round.

“It’s nice to come to these events and see old friends, some you haven’t seen in 20 or 30 years. That’s a big part of this tournament. The course set-ups are a little easier, it’s not life or death any more. The senior events are a lot of fun to play in.”

White Rock’s Doug Stone has been a regular at the senior men’s tourney ever since he became eligible to play. “I have played nearly every one of them since I turned 55,” says Stone, who is now 71. Stone still loves the competitive side of the event, but also enjoys the camaraderie.

“I think the opportunity to move the tournament to various locations around the province provides an opportunity not only to see other areas and play new courses, but you get to meet other people,” Stone says.

“Certainly from my perspective, I enjoy the competition, but the social side of it is great. I usually travel with a couple of buddies, we stay together and we go to dinner at the local restaurants,
so there is a whole other component that is equally important.”

At age 75, Doug Mader is the oldest player in the field. The retired teacher came all the way from Regina to tee it up. He was invited by a friend, who is a member at Shuswap Estates. Mader has a rich golf resume that includes being on multiple Willingdon Cup teams. He is a member of the Saskatchewan Golf Hall of Fame.

Mader still plays the game well -- he opened with an 83 on Tuesday -- but at this stage of his golfing life the camaraderie that is found at events like this is a big part of the appeal. “I am just having a great time,” Mader said after his round. “Whatever I shoot doesn’t matter. I am 75 years old. I am not going to be beating a lot of these guys, the young ones at least. I can’t drive it as far as they can.”

Patrick Kelly of Victoria is the new president of British Columba Golf and has been a regular in this tournament the last few years. Kelly said the spirit of the event is what makes it special for him. “The guys I played with today, we all had our good holes, our not-so-good holes, but we were all supporting each other,” Kelly says.

“It was a lot of fun. Even though you are competing, once you finish your shot, you are chatting with your playing partners. It’s the great sportsmanship that I love about this event.”

The format of the senior men’s tourney has been changed this year. There is no longer a 36-hole cut. The players seem to like that decision. “It allows people to know they are going to get to play a practice round and three more competitive rounds of golf,” Stone says.

“It makes the journey better. A number of players know in their heart it is going to be very difficult to make the cut. It is also a real grind. I think it adds to the enjoyment, particularly when you are making every effort to grow the game.”

Tuesday’s first round was played under mainly cloudy skies with the occasional shower. Roxburgh, Sandy Harper of Nanaimo, Gudmund Lindbjerg of Pitt Meadows and Mitchell Rigby of West Vancouver, who were all playing late in the day, shot one-under par 70s to tie for the lead. Harry Ferguson of Invermere was one back after shooting an even-par 71.

Defending champion John Gallacher of Burnaby opened with a three-over 74. Lindbjerg’s 70 has him in the lead for the super-senior division for players 65 and over.

CHIP SHOTS: A two-man best-ball competition is being held concurrently with the senior men’s tourney. The teams of Gallacher and Lindbjerg and Harper and Christopher Barton of West Vancouver are tied after firing six-under 65s. . .In the zone competition, Zone 6 (upper Vancouver Island) leads Zone 3 (Fraser Valley) by two shots. . .The top three B.C. players after Thursday’s final round will represent the province at the Canadian Senior Men’s Championship, which goes Sept. 6-9 in Niagara Falls, Ont.