‘Old-Timer’ Andrew Hennings Keeping Up With The Kids At 114th B.C. Amateur Championship 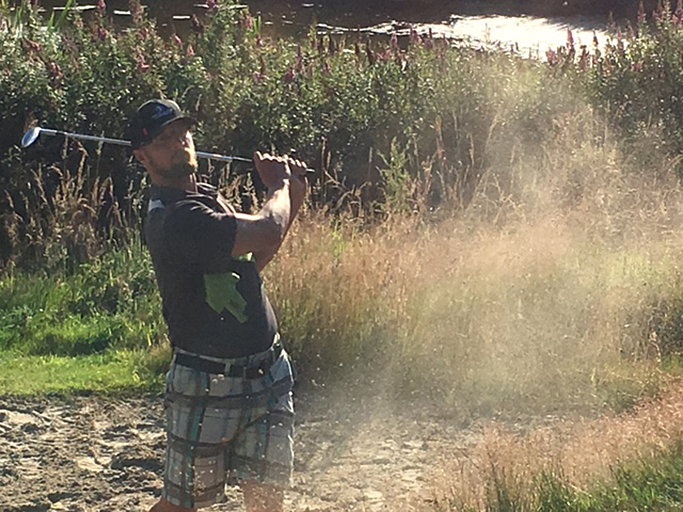 Veteran Doug Roxburgh, Playing In His 50Th Straight B.C. Amateur, Misses The Cut By One Shot At Pheasant Glen

QUALICUM BEACH -- The idyllic oceanside town of Qualicum Beach is a popular retirement spot and has what can safely be described as a mature citizenry. It has become decidedly younger this week with the arrival of the B.C. Amateur Championship at Pheasant Glen Golf Resort.

Of the 156 players who teed it up in the 114th playing of the B.C. Amateur, 124 are 24 years old or younger. And 43 of those are 18 and younger. The leaderboard through two rounds is a reflection of that youth. Two of the three co-leaders are 15 and 20. There is a liberal sprinkling of other teens and early 20-somethings fairly high up on the leaderboard.

The exception is ‘old-timer’ Andrew Hennings. He’s 33, which would qualify him as a spring chicken by Qualicum Beach standards. But in this field, he’s one of the old guys.

Hennings is a Burnaby resident who a few years ago played collegiately for Simon Fraser University and now works on the grounds crew at Fraserview Golf Course in Vancouver. He shot a tidy two-under par 70 to move to five-under through two rounds. That left him tied for the lead with 15-year-old Nolan Thoroughgood of Victoria and 20-year-old Zach Anderson of Nanaimo.

Hennings, who plays regularly on the Vancouver Golf Tour, acknowledged he did not expect to be sleeping on the lead at the midway point. “I was thinking a couple of 77s would be my speed,” he said with a wry smile after his round.

Hennings hadn’t exactly torn up the B.C. Mid-Amateur Championship in early June at Nanaimo Golf Club. “I shot 79-79-86, so the guys at Fraserview gave me grief after that one,” he said. “I don’t know. As long as I am able to find my tee shot I feel I can compete.”

The weather was much better at Pheasant Glen on Wednesday, but the scores were higher. Players faced a tough set-up and 13-time winner Doug Roxburgh was among the casualties. Roxburgh, playing in his 50th straight B.C. Amateur, shot a five-over 77 Wednesday to finish at seven-over par. That was one stroke shy of the cut.

“My putting kind of let me down on the front nine,” Roxburgh said. “I was five-over and then even on the back. I didn’t make anything. No birdies, five bogeys, so that’s the way it goes.”

It was just the third missed cut in 50 tries for the 64-year-old Roxburgh, but his second straight. He also missed the cut last year by one shot at Fairview Mountain in Oliver. He would not guarantee that he will be back again next year to try again.

“I wanted to make the cut and play all four rounds,” Roxburgh said. “That was my goal. I didn’t make it. I’m not going to say I will try again next year. We’ll assess things closer to the entry deadline (next year).”

After 40 players broke par in Tuesday’s first round, many of the tees were moved back and some of the pins were tucked. As a result, only 10 players broke par Wednesday and the day’s best score was a three-under 69 posted by Marine Drive’s Jacob Vanderpas. The 21-year-old is in a four-way tie for fourth place at three-under par.

Roy Kang of North Vancouver and Kelowna’s William Deck, who shared the lead after shooting six-under 66s on Tuesday, both struggled in the second round. Kang shot a 76 Wednesday, while Deck fired a 77. Jake DuVall, a 22-year-old from Victoria, 17-year-old Samuel Su of Surrey and veteran Greg Koster of Courtenay are also tied for fourth at three-under par.

Hennings, who is camping with his girlfriend/caddy while in Qualicum, doesn’t know what to expect from himself the final two rounds. He spent considerable time practising his short game after his round. “I have never been in this position before,” he said.

“My total here of 139 is my best two-round total. I will probably be nervous. I was nervous today. You see a lot of trouble out there. There is trouble on both sides of every hole. I just want to keep playing golf, enjoy the process and hit it hard. I know I can’t be too cocky on this golf course. One errant drive and you are re-loading.”

CHIP SHOTS: There will be a Roxburgh in the field the final two rounds as Doug’s son, James, made the cut. . .Ali Ladak of Richmond aced the 160-yard par 3 8th hole during Wednesday’s second round. . .A two-man best-ball competition is being held concurrently with the B.C. Amateur. The team of Brian DeBiasio of Qualicum Beach and Greg Koster of Courtenay lead at 16-under. That is one shot better than the Courtenay duo of Mark Valliere and Logan Yanick. . Zone 6, which encompasses Vancouver Island north of Chemainus as well as Powell River, won the 36-hole zone competition with a score of nine-under par. That was eight shots better than second-place Zone 3 (Fraser Valley). . .Eighty-three players made the cut of six-over par.