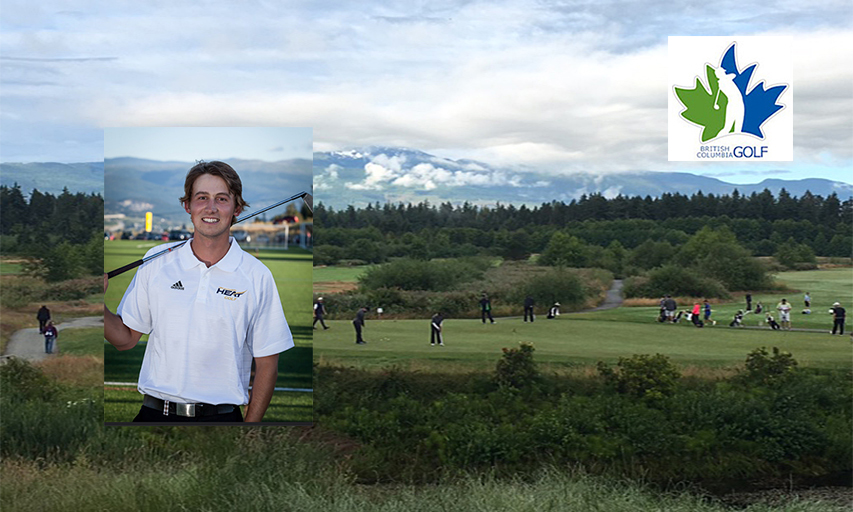 It made for a soggy ending to what Roxburgh described as day when he didn’t have his best stuff. He finished with a two-over 74, which left him eight shots behind co-leaders William Deck of Kelowna and North Vancouver’s Roy Kang.

“I was three-over after three holes and brought it back and finished two-over,” Roxburgh said. “So all in all I am fairly pleased with that, especially with the way I hit the ball. I think I hit it a little better coming in. I am out late tomorrow so if the weather cooperates maybe I can get out and hit a few balls and try and find something for tomorrow.”

“No, I didn’t, I was just looking forward to it like all the rest,” he said. “It is kind of a nice routine, the Ogopogo (in Kelowna), this one, then the B.C. Seniors the next week, so it is a nice stretch of golf to be able to play. That is what i was looking forward to.”

He was also looking forward to seeing Pheasant Glen, a course he had not played until Monday’s practice round. He has quickly fallen in love with it. “It is a great golf course,” Roxburgh said. “Totally unexpected, totally different than what I had in my mind. I have driven in here a couple of times just to look around, but once you get out and play, there are some quality holes. Sandy Harper says it is the most under-rated course on the Island and I tend to agree. It is a really good test of golf.”

At age 64, Roxburgh came to Pheasant Glen with no illusions of winning his 14th B.C. Amateur. He just wants to make the cut, something he has done in 47 of his previous 49 starts. He missed the cut by one shot at last year’s B.C. Amateur at Fairview Mountain in Oliver “For sure, I have no other goal than that,” he said. “ I think probably another 74 would do it, four-over, but we’ll see what happens with the scores and the weather.”

Roxburgh’s 74, the same score recorded by his two playing partners, left him tied for 68th after the first round. The top 70 and ties after Wednesday’s second round will make the cut and play the final two rounds. Deck, a 24-year-old from Kelowna, got most of his round in before the rain started. “We pretty much played 71 and a half holes without rain and then it started coming down on our second shot into the final green,” he said.

Deck made seven birdies and recorded just one bogey in his round, which he said could have been even lower. “I left a couple out there, which is the disheartening thing. I had it going. I was playing really well and was hitting the ball great.”

Deck, who played his collegiate golf at the UBC-Okanagan campus, is competing in his sixth B.C. Amateur. His best finish came last year, when he tied for 11th. “I want to make the Willingdon Cup team,” he said. “That is my main goal. I think I am playing well enough to make that a reality.”

The top three B.C. players after Friday’s final round will represent the province at the Canadian Men’s Amateur Championship, which goes Aug. 8-11 at Royal Ottawa Golf Club. Kang, a 17-year-old from North Vancouver, birdied four of his first five holes en route to his 66. It was a bounce-back round of sorts for Kang, who was disappointed with his 12th-place finish at last week’s B.C. Junior Boys Championship at Arbutus Ridge Golf Club in Cobble Hill.

“Last week i didn’t play as well I wanted to,” said Kang, who is heading to the University of Denver this fall on a golf scholarship. “But I have played here at Pheasant Glen before so I know the course pretty well. I knew if it hit some good shots there was low score to be had.”

Kang made seven birdies in his round, which also finished in the heaviest of the rain. “All the birdies came from five to 10 feet,” he said. “I was just hitting it close and making some putts.” Another 17-year-old, Samuel Su of Surrey, along with Vancouver’s Sadiq Jiwa and Nolan Thoroughgood of Victoria, are one shot behind the leaders after opening with five-under 67s.

“I think hitting the fairways is the key here,” said Su, who is about to enter Grade 12 at Elgin Park Secondary. “Don’t be too greedy. Know when to go for the pin and know when not to. I don’t want to get too confident. I still have three days left.”

CHIP SHOTS: A two-man best-ball competition is being held concurrently with the B.C. Amateur. The team of Steve Diack of Pitt Meadows and Tyler Roope of Surrey lead after the first round with an 11-under 61. That is one shot better than the teams of Connor O’Dell of Pitt Meadows and Connor McLellan of Chilliwack, Brian DeBiasio of Qualicum Beach and Greg Koster of Courtenay and the Courten ay duo of Mark Valliere and Logan Yanick. . .In the 36-hole zone competition, Zone 3 leads after the first round with a score of eight-under par. Zone 2 sits second at six-under.