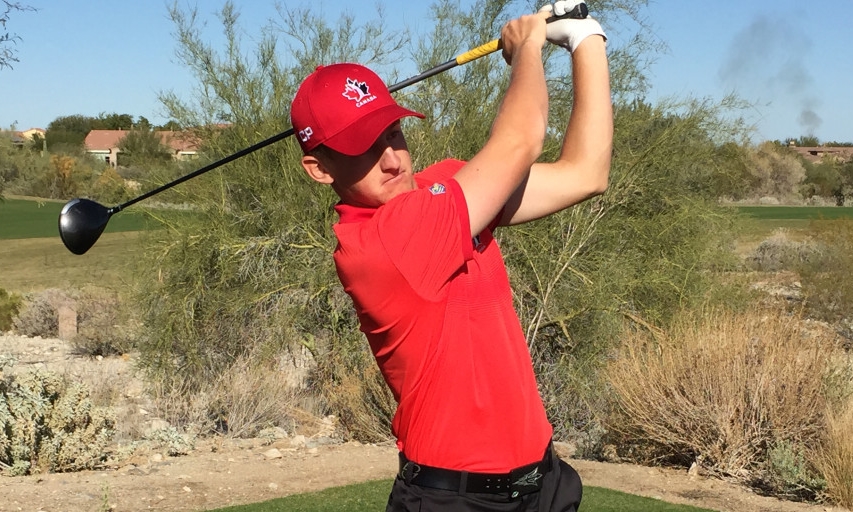 Most of the movement came outside the Top-10. Luke Moser picked up 24 spots in the world rankings to move up to No. 14 in Canada. The Waterloo, Ont., golfer sank a two-foot birdie putt on the first playoff hole to clinch the Sun Belt Conference Championship for Troy University – the school’s first title since notching back-to-back championships in 1996 and 1997. The victory gives Troy an automatic berth into the NCAA Regionals after earning an at-large bid a year ago.

Maxwell Sear picked up 37 spots in the world rankings after finishing in a tie for 12th at the Big 12 Championship. The Unionville, Ont., native was just two spots shy of earning All-Tournament honours as West Virginia competed in the tournament for the first time in school history. It was the fifth Top-15 result of the season for the freshman who managed to pick up Athlete of the Week honours.

Vincente Blanchette makes his debut inside the Top-20, taking over the 20th spot in the Canadian rankings. The junior from Saint Jean, Que., who plays for Gardner-Webb University finished tied for 18th at the Big South Championship which was won by fellow Canadian Austin James. Blanchette also earned Big South Men’s Golf All-Conference and All-Academic Team honours as a result of his play this season. Blanchette earned three Top-10s this season and was the top-finisher for the Gardner-Webb men’s golf team in six events this year, which included his first ever collegiate victory.

Top-ranked Maddie Szeryk took the down time in her collegiate schedule to play in the LPGA event in her home state of Texas. The dual-citizen and National Team member made it through three rounds before being cut, but she did manage to finish ahead of Tour regulars Lexi Thompson, Karrie Webb, Yani Tseng and Michelle Wie.

Meanwhile, No. 3 Taylor Kim, No. 4 Naomi Ko, No. 6 Michelle Kim and No. 7 Jaclyn Lee all made minor gains in the world rankings ahead of the NCAA Golf Championships.

Biggest Move: Sophie Liu of Surrey, B.C., gained 132 spots in the world rankings. Liu, who currently attends high school in Florida, has signed a letter of intent to play golf at Iowa starting this fall.

Roger Sloan gained 136 spots in the world rankings and moves into the Top-10 in Canada for the first time this year, following his fifth-place finish at the Web.com’s United Leasing & Finance Championship. Buoyed by a T5 the previous week, Sloan narrowly missed out on his second career win by two shots.

No. 2-ranked David Hearn picked up three places after finishing in a tie for 20th at the PGA’s Zurich Classic of New Orleans. The result was worth 2.42 world ranking points and marked the second consecutive points-paying finish in as many tournaments for the Brantford, Ont., golfer. He has scored points in four of his last five PGA Tour events.

Adam Hadwin also moved up one place in the world rankings after a tie for 36th in New Orleans. It was his second straight points-paying finish and his third in the last four events for the No. 3-ranked pro in Canada.

Other notable results: No. 4 Brad Fritsch missed the cut at the Web.com tour event in Indiana following a win and a runner-up finish. No. 5 Nick Taylor finished in a tie for 36th in New Orleans. No. 7 Taylor Pendrith finished tied for 57th at Web.com Tour event while No. 8 Adam Svensson finished tied for 46th.

There were no changes among the women’s Top-10 this week. Brooke Henderson remains at No. 5 in the world rankings despite her first non-Top-10 result on the LPGA Tour this year. The Smiths Falls, Ont., native finished in a tie for 19th at the Volunteers of America Texas Shootout – snapping a string of eight consecutive Top-10 finishes.

The only player making any positive gains within the Top-10 was No. 7 Jessica Wallace, who picked up three places in the world rankings.

Other Notable Results: No. 2 Alena Sharp, No. 4 Samantha Richdale and No. 5 Maude-Aimée Leblanc all missed the cut at the LPGA Tour event.