USGA Agronomist Larry Gilhuly Rebuked Many Of The Vicious Reports Regarding The Condition Of The Greens At Chambers Bay During The 2015 U.S. Open

Nearly 10 months later, Larry Gilhuly remains adamant that Chambers Bay did not get a fair shake.

Gilhuly, the west region agronomist with the United States Golf Association, told the recent annual general meeting of British Columbia Golf that there was a lot of misinformation from the media about the condition of the greens at the 2015 U.S. Open.

Yes, there were four really bad ones, Gilhuly acknowledged. But he said most of the others were quite good. “The biggest mistake we (the USGA) made is we should have let the pros know how bad No.s 1, 4, 12 and 15 (greens) were,” he said. “They were bad. They were broccoli.”

It was Swedish pro Henrik Stenson who made the initial broccoli comparison during last year’s tournament. “What day did he say it?” Gilhuly said. “He didn’t say it the first day when he shot 65 in the morning. He said it the second day when he shot 74 and played in the afternoon.”

Gilhuly called suggestions from the likes of Golf Channel analyst Brandel Chamblee that an infestation of poa annua grass on Chambers Bay’s fescue greens was the problem, “utter baloney.” He called Chamblee “an idiot.”

Gilhuly said most of the greens had very little poa annua and much of it was confined to the outer edges of the putting surfaces. Noting that Chambers Bay sits on the site of a former gravel pit, Gilhuly suggested that small stones blasted out of greenside bunkers during play and unrepaired ball marks were the big culprits. 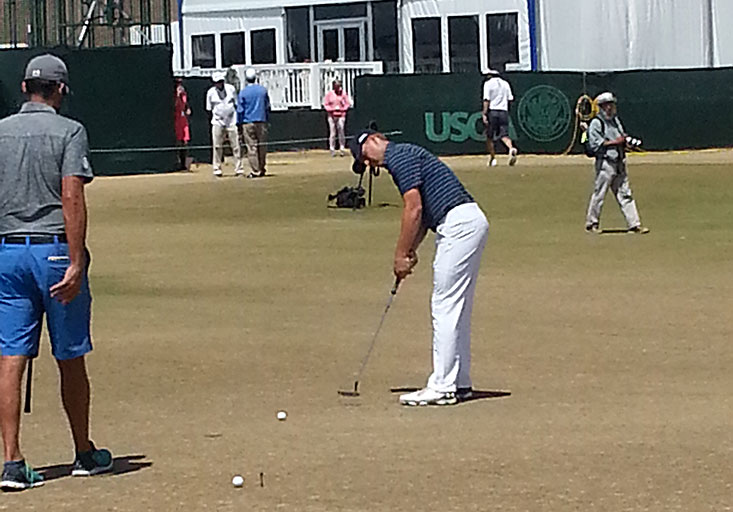 Eventual Champion Jordan Spieth Practices Putting On The 'Broccoli' Greens At Chambers Bay Prior To The Final Round Of The 2015 U.S. Open

Gilhuly said it was excessive play in the winter of 2014 that led to the problems on some of the greens at Chambers Bay. “The reason those greens were bad is because it’s a municipal golf course and that municipal course played 2,000 rounds in January on the greens. That is why those four greens got so bad. That’s winter damage. The greens were frozen. They had to make money. They just wore them out, so the staff wore their you-know-whats off for the next 15 or 16 months to get fescue back onto those greens and they did it. But as soon as we got them dried down they didn’t take well.”

Chambers Bay, located southwest of Tacoma on the shores of Puget Sound, was initially hurt by some of the criticism it received during the U.S. Open. “Because of the negativity they did not get as much play as they expected right after the Open, but now they are,” he said.

Gilhuly remains proud of the tournament. “Six of the top 10 players in the world finished in the top 10 and despite these ‘horrific’ conditions what a great championship it was,” he said.