There’s A New Sheriff In Town 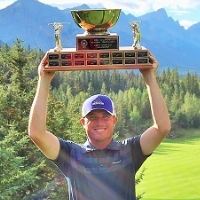 The stunning Stewart Creek G&CC played host to the 2015 PGA of Alberta Championship sponsored by Club Car and TaylorMade adidas.

The course proved to be a great test for the 100 players over the past two days. The players saw many of Mother Nature’s elements including, bears, rain, cold temperatures and sunshine. Greg Andrew and Chris Schatzmann’s amazing team provided exceptional hospitality to all the players which included hole spotters, score keepers, meals and a shootout.
The final round saw lots of movement amongst the leaders, however, Dustin Risdon (National Golf Academy @ McCall Lake) came out victorious after shooting an incredible 7-under 64 today to finish 9-under for the tournament. Risdon had 4 birdies on the back nine to separate himself over the rest of the field. Coming in second was Mike Belbin (Royal Mayfair GC) who shot 4-under 67 for day two to have a total of 136 to finish 6 under. David MacComb made a charge on day two with 7 birdies and one eagle to shoot 66 for a total of 137.
Click here for the final results of the 2015 PGA of Alberta Championship.
Coming up next week is the PGA of Alberta Club Professional Championship which will be taking place at the Edmonton CC and will host approximately 60 of the provinces top Head and Executive Golf Professionals. The winner will receive a spot on Team Alberta for the PGA of Canada’s Club Professional Championship at the Verrado GC in Buckeye, Arizona.
Today the PGA of Alberta is comprised of over 550 Golf Professionals who are Leaders in Golf. We are Teachers, Managers, Merchandisers, Mentors, Promoters, Players and Ambassadors. We provide Instruction to all golfers, Leadership for all golf environments and the Expertise necessary to handle any situation. Our livelihood is Golf. Whatever Golf means to you.