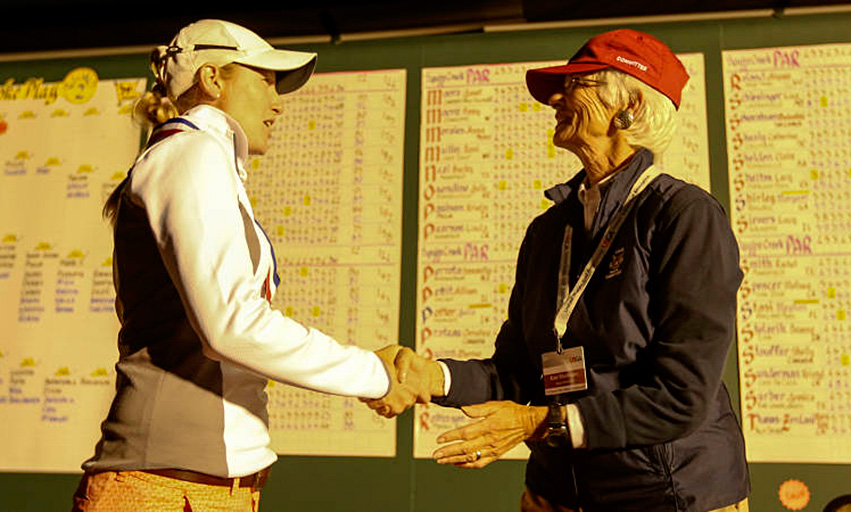 Canada's Casey Ward Was The Medallist In The 29th U.S. Women's Mid-Amateur, Just The Second Canadian To Earn That Honour - Image Courtesy USGA

Casey Ward, 25, of Picton, ON followed Saturday’s round of 2-over 74 with a 2-under 70 on Sunday to earn stroke-play medalist honors at the 29th U.S. Women’s Mid-Amateur Championship, being conducted at the 6,061-yard, par-72 Squire Creek Country Club.

Ward was joined in the match play portion of the tournament by two British Columbia golfers, Christina Spence Proteau and Shelley Stouffer.

Ward is the second Women’s Mid-Amateur medalist from Canada and first since Mary Ann Hayward, the 2005 Women’s Mid-Amateur champion, did so in 1998. Entering the day two strokes behind Sarah Davison, Ward posted four birdies and two bogeys on the day to record the low round of stroke play.

“I'm really excited. I didn't really have too many expectations coming into this week,” said Ward, the 2015 Ontario Women’s Mid-Amateur champion. “That's how I have approached things all summer, not going in with any expectations and just playing my game. It's nice to see my name at the top.”

Starting on the 10th hole, Ward started with three pars before birdieing the par-4 13th and par-4 15th holes. She was able to overcome Squire Creek’s difficult greens by consistently giving herself good birdie opportunities.

“I was in the right position all day, for the most part,” she said. “I had a lot of good looks at birdie. I only got a few to fall, but I was right on the edge all day.”

Finishing five strokes behind Ward and in second place is Lauren Greenlief, 25, of Oakton, Va., the youngest competitor in the field. Sitting 2 over through 10 holes, Greenlief, the 2015 Virginia Women’s Amateur runner-up, turned things around with an eagle on the 488-yard, par-5 11th and added another birdie on the par-4 14th.

“I played really solid all the way around,” said Greenlief. “I had a couple three-putts I didn't have yesterday, but making an eagle gets you going. That was the turning point where I started playing really well coming in.”

First-round leader Davison, 35, a Squire Creek member who lives adjacent to the 17th hole, finished third with a two-day total of 7-over 151. That was just fine for the 2015 Louisiana Women’s Mid-Amateur champion, who knows everything resets when match play begins on Monday at 9 a.m. CDT.

“I didn't putt as well as I did yesterday and when I missed a green, I left myself a difficult chip,” said Davison, who carded a 7-over 79 on Sunday. “But after yesterday, I knew I didn't have to come out and shoot another 72 to make match play. I knew I just had to come out and keep it respectable.”

Defending champion Margaret Shirley, 29, of Roswell, Ga., and Katie Miller, 30, of Jeannette, Pa., tied for fourth at 8-over 152. Christina Proteau, 32, of Port Alberni, B.C. and a quarterfinalist last year, posted the biggest turnaround of the championship, shooting even par after posting an 87 on Saturday, easily qualifying for match play.

Proteau was set to play Debbie Adams from Asheville, N.C. in the round of 64 match play portion while Nanoose Bay’s Shelley Stouffer, who finished T17 in stroke play qualifying was to take on Tracy Welch of Winchester, Mass. Ward takes on Mimi Hoffman of Springfield, VA, who survived an 11 player Monday morning playoff.

A Monday-morning playoff determined the final seven spots in the 64-player match-play field. Eleven players competed for those spots, beginning at 8 a.m. CDT. Among the 11 players in the playoff who survived was 1997 U.S. Women’s Amateur runner-up Robin Burke, 53, of Houston, Texas, who will also serve as the captain for the 2016 USA Curtis Cup Team.

Joey Flyntz is an associate writer for the USGA. Email him at jflyntz@usga.org.