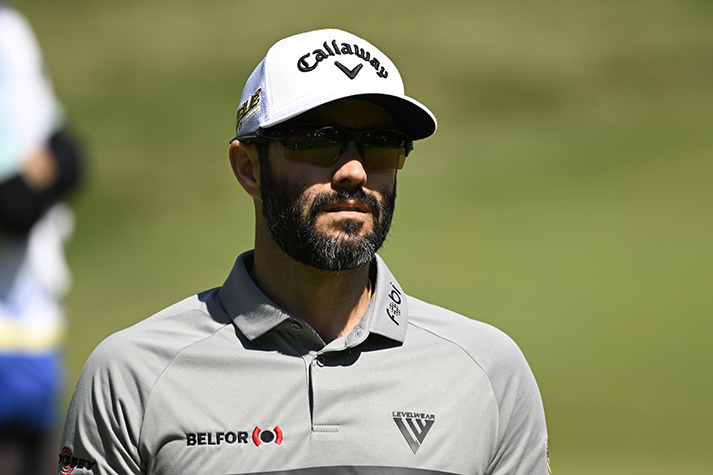 Abbotsford’s Adam Hadwin is proud of the way he battled as he contended in a major championship for the first time. After holding the first-round lead at the U.S. Open, Hadwin remained in contention all weekend and settled for a tie for seventh place.

“That round could have slipped away at any point during that front (nine) with some of the places I hit it,” Hadwin said after Sunday’s final round.

“I just kept my head down and kept moving forward and am very proud of the way I ground through this week. I really didn’t have my best stuff at times. I didn’t necessarily feel comfortable at times, but I found a way to get it done.”

Hadwin closed with a one-over 71 and finished at one-under par, five shots behind winner Matt Fitzpatrick of England.

“It was very, very scrappy,” Hadwin said of his final round. “It was pretty ugly early, I didn’t have a lot of rhythm, (hit) a couple of snap hooks with the driver. I was kind of lucky to get out of that first stretch one-over the way I was hitting it.”

Hadwin made a back-to-back birdies on the 16th and 17th holes Sunday before bogeying his final hole. “I finally started to settle down a little bit on seven and beyond, hit some good shots . . .it was nice to get a couple there on 16 and 17. (No.) 18 stings a little bit, but I’m under par at a U.S. Open for four days. That’s not too bad.”

Hadwin earned $515,934 and the result moved him up 24 spots to 81st on the Official Golf World Ranking. It will also help him in his quest to make the Presidents Cup International team for this fall’s competition. It was Hadwin’s fifth top-10 finish of the season and he likes where his game is headed after making some significant swing changes earlier this year.

“It was a lot hard work and some really crappy golf for a while that I had to fight through,” he said. “These last six months or so have been very eye-opening for me, I have played a lot of really good golf. I do think another win is coming at some point. It was a great week to contend in a major and we’ll keep moving forward from here.”

Fellow British Columbians Nick Taylor of Abbotsford and Roger Sloan of Merritt both missed the cut at the U.S. Open. The PGA TOUR is in Cornwall, Ct., for this week’s Travelers Championship, where Sloan and Surrey’s Adam Svensson are both in the field.

TOP 10 AGAIN: Richmond’s Chris Crisologo registered his second straight top 10 on the PGA Tour Canada circuit at the ATB Classic in Edmonton. Crisologo tied for seventh at 14-under par. That was five shots behind Edmonton’s Wil Bateman, who became the first Canadian to win a PGA Tour Canada event in his hometown. Bateman prevailed in a three-man sudden-death playoff when he chipped in for eagle on the second extra hole.

JOHN THIRD: Vancouver’s Leah John finished third at the Glencoe Invitational in Calgary. Her three-over total of 219 in the 54-hole event left her two shots behind winner Sarah-Eve Rheaume of Boischatel, Que. John, who just completed her junior year at the University of Nevada, will be defending her B.C. Women’s Amateur Championship this week at Pitt Meadows Golf Club.

Sonja Tang of Victoria, who is a member of UBC’s NAIA and Canadian University/College championship team, tied for fourth at five-over par. In the female professional division at the Glencoe, Kelowna’s Megan Osland tied for third at five-over par. That was four shots behind winner Caroline Ciot of Montreal. Defending champion Christine Wong of Richmond finished eighth.

The men’s amateur division was won by Matthew Anderson of Mississauga, Ont. He beat the field by seven shots with a score of 11-under par. Delta’s Russell Howlett tied for seventh at two-over par.

ZACH ATTACK: Zach Olson of Chilliwack Golf Club beat Cory Renfrew of Modern Golf on the first hole of a sudden-death playoff to win the PGA of BC Assistants Championship at Sandpiper Golf Course in Harrison Mills. Both players finished the 36-hole event at eight-under par. Renfrew shot the low round of the tournament with a second-round 64. Olson earned $3,000 for the win, while Renfrew took home $1,750.

Luke Bogdan of Cheam Mountain Golf Course and Steven Lecuyer of Seymour Creek Golf Centre tied for third at six-under par and each took home $1,125. The PGA of BC Senior Championship was played concurrently and Doug Morgan of Richmond Country Club won the title for the second time with a one-under total of 143.

That was one shot better than four players: Keith Vandenbrink of Vernon Golf & Country Club; Brett Burgeson of Breaking Par Golf Academy; Eddward Boudreau of Gorge Vale Golf Club; and Daryl Stubbs of Pacific Golf Academy. Morgan earned $1,850 for the win while the four runners-up each made $875.

MINNI MAGIC: South Delta’s Jace Minni went low on both sides of the border this past weekend. Minni shot a five-under 67 to win a Washington State Amateur Championship qualifier at North Bellingham Golf Club. The following day he fired a nine-under 63 at Kings Links in Delta in the first round of the British Columbia Golf Zone 4 (Vancouver City Amateur) Championship.

He followed that up with a second-round 66 at his home course, Beach Grove Golf Club. His 14-under total beat the field by five shots. Minni just finished his second year at Gonzaga University in Spokane, Wash.

ITALY BOUND: Emily Cornwall of UBC-Okanagan and Jackson Jacob and Jake Armstrong, both of the University of the Fraser Valley, will be part of Canada’s team at next month’s FISU World University Championship in Italy.