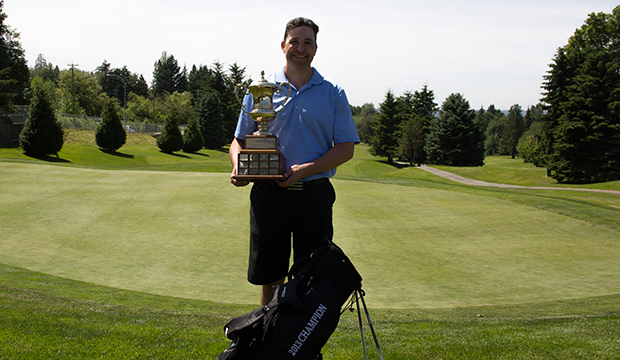 Yardley, a Fraser Valley Zone 3 player and resident of Maple Ridge, started his final round of the Championship not the way he had not wanted to, carding two consecutive bogeys. However, his resiliency on the par 70, 6,131 yard Ledgeview Golf Club proved to be the deciding factor as he was able to get his final round back to even-par 70 and post a 212 total (69-73-70), one clear of the field.

Vancouver’s Andrew Robb, the 36-hole leader and Shaughnessy Golf and Country Club member, started the day three strokes ahead of Yardley, only to give all of them back after a double boegy seven on the difficult par-5 476 yard 5th hole. Yardley was able to birdie the hole, making it an even race from that point on.

“I just wanted to come out and have fun. Bogeys and birdies, it really doesn’t matter what we are shooting. We are out here for a good time,” stated Yardley.

“I was able to capitalize on a few good shots after a poor start. Until I got to number 12, and made a bogey. I hit a couple bad shots back-to-back and ended up making a double bogey on 13. I ended up going from having a lead to having to come from behind.”

And come from behind he did. Yardley would par holes 14 through 16 and after a bogey by Robb on the 16th hole, he would make birdie on the par-3 17th hole, giving himself a one-shot cushion in what he described as “pretty much the difference coming in.”

After witnessing a Robb birdie attempt slide wide of the cup, Yardley would two-putt from eight feet and tap in for his win with a big smile on his face.

Asked how it feels to be British Columbia’s Mid-Amateur and Master-40 Champion, Yardley was reserved and only needed one work to describe the feeling, “terrific.”

For Robb it is a runner-up finish in the overall championship with rounds of 71-68-74 (213) and as a consolation, a Mid-Amateur only division title following a great battle with Yardley.

“It was good to have some competition. I wish I could have come out on top but theres always another day with golf and another tournament,” stated Robb.

Rounding out the top-3 in the overall Men’s Mid-Amateur Championship is Vancouver’s Colin Gilliam. Gilliam, a member at Mission Golf and Country Club, posted the day’s best score with a three-under-par 67 that featured four birdies, an eagle, a bogey and an unfortunate double bogey. As a result of his impressive play throughout the tournament with rounds of 71-76-67 (214), Gilliam will round out Team British Columbia heading to the Canadian Mid-Amateur Championship at Blackhawk Golf Club in Spruce Grove, Alberta on September 3-6. Individuals who placed in the top-15 in this event are granted quotas to nationals. 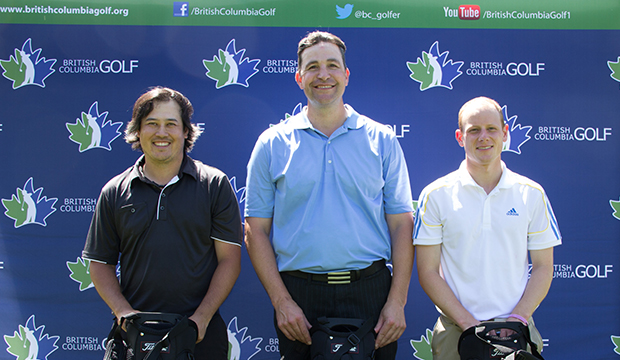 Finishing tied for runner-up in the Master-40 division were Kelowna’s Norm Bradley and local favourite Brian Bates of Abbotsford and member of Ledgeview Golf Club. Both Bates (74-70-73) and Bradley (70-74-73) would close with 217 totals, five strokes back of Yardley.

In the Mid-Amateur only division, Kevin Hogg of Coquitlam would finish in solo third after a final round 71. Hogg would shoot 74-71-71 over his three days, good enough for a 216 total, only three shy of Robb for the division win.

“Every time I play Ledgeview it is always in great shape. The greens are always tremendous. They are always true and if you get the ball rolling on line, you know you have a chance to make it,” stated the Champion Yardley.

“The superintendent did do a great job.”

British Columbia Golf would like to thank Ledgeview Golf Club and their many volunteers for their hospitality in hosting the Men’s Mid-Amateur Championship and their continued support to amateur golf in the province.

Robb, a resident of Vancouver and recently eligible Mid-Amateur competitor, had an inconsistent but equally impressive round that featured five birdies, one eagle and five bogeys en route to a two-under-par 68, 139 two-round total. Robb is currently the only player under-par for the Championship, sitting in the red by one number.

First round leader and Maple Ridge resident Kris Yardley followed up his first-round 69 with a three-over-par 73, bringing him into a tie for second at 142 with fellow Fraser Valley Zone 3 player Greg Bismeyer of Pitt Meadows. Bismeyer rebounded from an opening round 73 with an efficient one-under-par 69 that featured three birdies and two bogeys. All three players will be teeing off in tomorrow’s final grouping.

In the Master-40 division, Bismeyer and Yardley sit tied atop the leader board, followed closely in T3 positions by Ledgeview Golf Club member Brian Bates of Abbotsford and Kelowna’s Norm Bradley. Bates opened the Championship with a four-over-par 74 in round one, followed up with a level-par 70. Bradley, who sat in second place after round one, only managed to make a single birdie in his second round coupled with five bogeys, shooting a four-over-par 74, good enough for a 144 total.

As a result of their stellar play through two-rounds, Bismeyer and Yardley representing Fraser Valley Zone 3, are taking home the White/Haddrell Cup for team play competition. The duo carded a two-round team total of 284, edging the closest tandems from Ledgeview Golf Club and Mission Golf and Country Club by eight strokes. The White/Haddrell Cup is a competition that takes place during rounds one and two at the Men’s Mid-Amateur Championship with two-man teams being selected based on the lowest two total scores by players representing the same club or zone.

Players will be going off split-tee starts tomorrow starting at 7:30am. Spectators are welcomed and encouraged to attend.

Abbotsford, B.C. (BRITISH COLUMBIA GOLF)- After the first round of play in the British Columbia Men’s Mid-Amateur Championship hosted by Ledgeview Golf Club, Kris Yardley leads by one stroke over Norm Bradley.

Yardley, a Zone 3 Public Players’ Club member from Maple Ridge posted an up-and-down one-under-par 69 in warm, breezy conditions at the 6,131 yard par-70 course in Abbotsford that boasts such alumni as Adam Hadwin, Nick Taylor and James Lepp. Yardley started hot out of the gates with five birdies and a bogey on his front half but lost his momentum on his back nine, carding four bogeys and a single birdie for the only under par round of the day.

One-stroke back of Yardley is Norm Bradley of Kelowna. Bradley carded four bogeys and four birdies, including an unfortunate three-putt on the final hole to head into round two sitting at even par 70. There are seven players sitting tied for third after first-round 71′s including Surrey’s Steve Savage, Vancouver’s Steve Barry and Ryan Brooks of Pitt Meadows. Yardley is leading both the overall Mid-Amateur division and the Master-40 division due to his age.

With 2012 Mid-Amateur champion Kevin Carrigan electing to test his chances at the Victoria Times Colonist, this years’ title is up-for-grabs to the field of 106 players. Several players are poised to make a run for the win including recent PNGA Cup Team champions Cory Hilditch of Penticton, Greg Koster of Courtenay, Travis Eggers of Fort St. John, Chris Moore of Vancouver and Nanaimo’s Sandy Harper. Others expected to compete at a high level are Pitt Meadow’s Ryan Brooks, Victoria’s Jeff Dinn and Matt Steinback of New Westminster.

Any number of Master-40 division men could make a run at the overall title as well as their divisional title including 2012 Master-40 runner-up Greg Bismeyer of Pitt Meadows, Norm Bradley of Kelowna, Mike McAleer of Vancouver and Ritch Hosker of Fort St. John. Looking to defend his 2012 Master-40 crown will be the aforementioned Koster.

The White/Haddrell Club Team Championship is played concurrently with the individual competition on days one and two. Two-man club teams are selected after the first round by taking the players with the lowest score from each representative member club with two or more competitors.

Golfers will also be vying for quota spots to compete in the Canadian Men’s Mid-Amateur Championship, being hosted by Blackhawk Golf Club  in Spruce Grove, Alberta on September 3-6 2013.